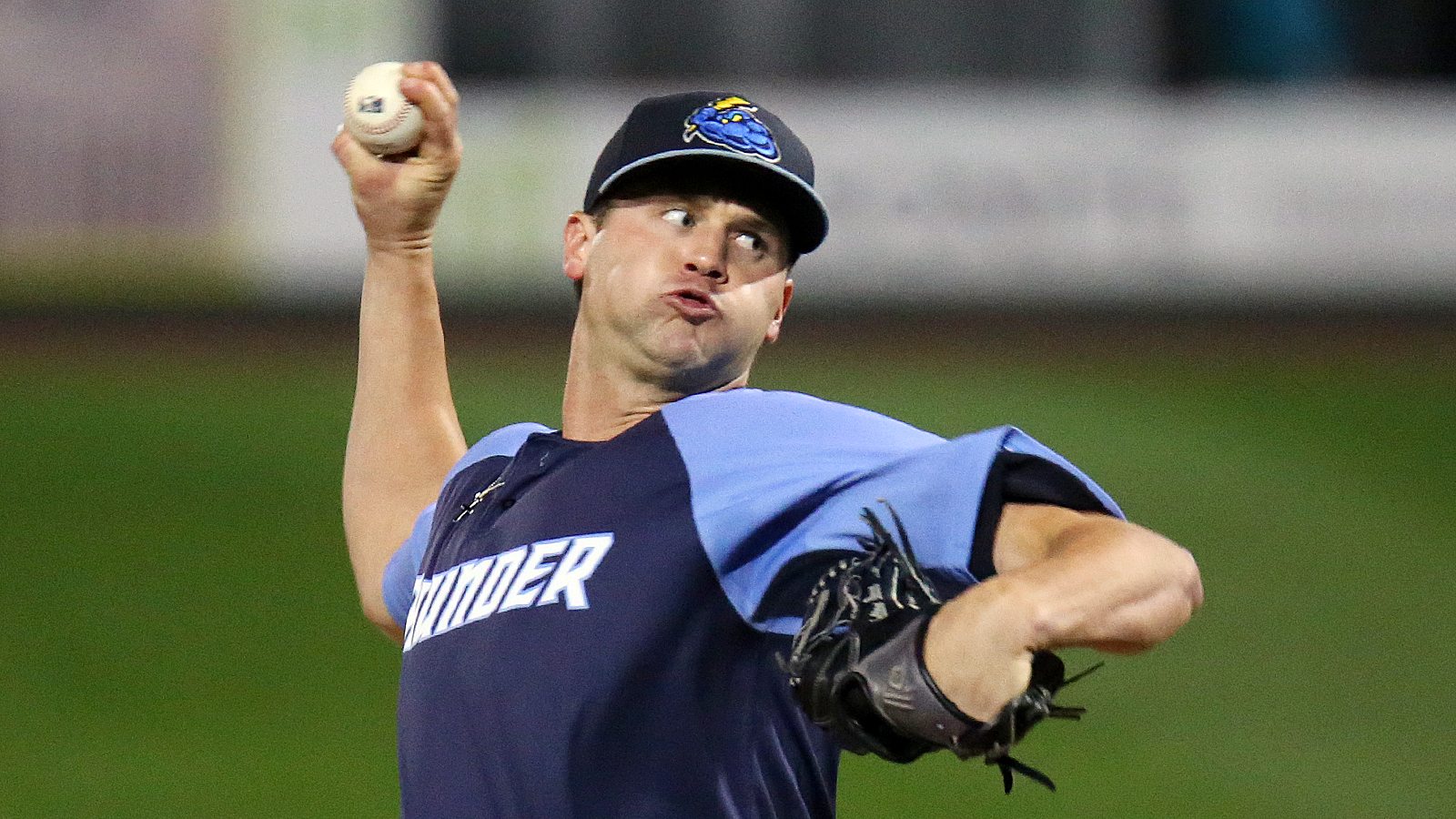 The offseason is finally here, and free agency is underway as players can now sign with different teams at both the major and minor league levels. On Monday, Baseball America announced the list of 16 New York Yankees players in their minor league system that are now free to sign with another team.

As we give you a little bit of information on each player’s time in the organization, remember to check out our updated tracker of prospects that are eligible to be taken in the Rule 5 Draft as well as players who are minor league free agents. First, let’s start with the pitchers.

Brewer was selected by the Yankees in the Rule 5 draft last December after spending four seasons with the Pittsburgh Pirates organization. The now 25-year-old right-hander played for three affiliates this year (Tampa, Scranton, and Trenton), but the bulk of his time was with the Thunder. In 29 games at Double-A, he went 11-for-13 in saves, had a 1.31 ERA, and struck out 43 batters in 41.1 innings. Plus, he gave up four hits in his final ten outings of the season.

Jimenez signed with the Yankees in 2010 but has never made it past the Rookie level. After getting ten starts last season, the 24-year-old right-hander was solely a reliever in the Appalachian League this year. In 12 games, he had a high ERA (6.14), gave up 15 runs in 22 innings, and opponents hit .308. Since 2010, he hasn’t pitched in more than 15 games in any particular year.

After the Diamondbacks selected Jones in the Rule 5 draft last year, they dealt him back to the Yankees in late March. The 28-year-old right-hander had impressive numbers with Trenton in 2016 as he struck out 67 batters in 45.2 innings to go with 11 saves. However, with Triple-A Scranton in 2017, he had a 4.38 ERA in 44 games and had a 7.08 ERA in the final 16 games he pitched.

Pena signed with the Yankees in July 2009 as an international free agent out of the Dominican Republic. The 26-year-old right-hander pitched at Tampa, Scranton, and Trenton this year, but most of this year was with High-A Tampa. He showed good things with Tampa this season as he had a 2.47 ERA and 64 strikeouts in 51 innings. But, he did have 22 walks in 27 games out of the bullpen.

Rivera was signed by the Yankees in September 2010 out of the Dominican Republic. In seven seasons with the organization, he never got higher than Tampa. With that being said, the 25-year-old had good numbers with Short-Season Staten Island in 2017. His 33 strikeouts were tied for the second most among mainly relievers on the team, and he had a 1.90 ERA in 19 appearances. 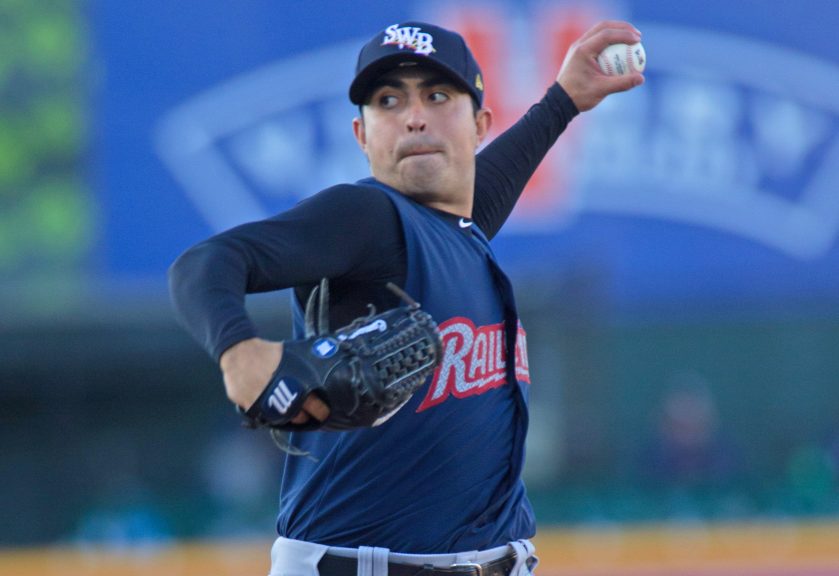 Camarena was drafted by the Yankees in the 20th round back in 2011 out of Cathedral Catholic High School in California. Three years after being drafted, he made the Florida State League All-Star team while with Tampa. This year, he went back-and-forth between Trenton and Scranton. In 22 combined starts, the 24-year-old left-hander went 6-6 with a 3.65 ERA and had 78 strikeouts to 31 walks in 118.1 innings pitched.

Mantiply was claimed off of waivers by the Yankees last November from the Tigers and eventually signed a minor league deal after being designated for assignment. With Scranton this season, he was mainly a reliever as only six of his 35 outings came as a starter (0.95 ERA in 19 innings). In 70 innings, the 26-year-old left-hander had a 2.83 ERA, struck out 62 batters, and walked 18. Down the stretch, he gave up five runs in his final 14 games.

Wooten signed with the Yankees in 2013 after spending his first two professional seasons with the Orioles (15th round pick in 2011). Unfortunately, injuries hurt the bulk of his time with New York. The 27-year-old left-hander hadn’t pitched since 2015 when he had a 4.28 ERA in 28 appearances with Tampa, Trenton, and Scranton.

Castillo starts off our list of catchers. He signed with the Yankees last December and New York was the seventh different organization that he has played for since signing with the Arizona Diamondbacks in 2002. The 33-year-old catcher appeared in 59 games with Trenton and Scranton. During that time, he had a slash line of .196/.243/.286 with three home runs and 13 RBI’s. Despite the low batting average, he did throw out 38 percent of runners trying to steal last year with Scranton (Baseball Reference).

Deglan was initially drafted in the first round of the 2010 draft by the Texas Rangers (22nd overall out of R.E. Mountain Secondary School in Canada, but never made it to the big leagues in his seven years in that organization. The 25-year-old catcher never appeared in a game with the Yankees last season as he spent all year on the disabled list. In his last year with the Rangers in 2016, he hit a mere .194 with nine home runs for Double-A Frisco.

Rodriguez signed with the Yankees in January 2017 after being in the organization two years prior. The 31-year-old played in 83 games for Scranton this year as their primary catcher. Despite hitting .176 at the plate with eight home runs, Rodriguez’s value came as a defender as he threw out 44 percent of runners attempting to steal (Baseball Reference). His only time in the major leagues was with the San Diego Padres in 2012 (two games). 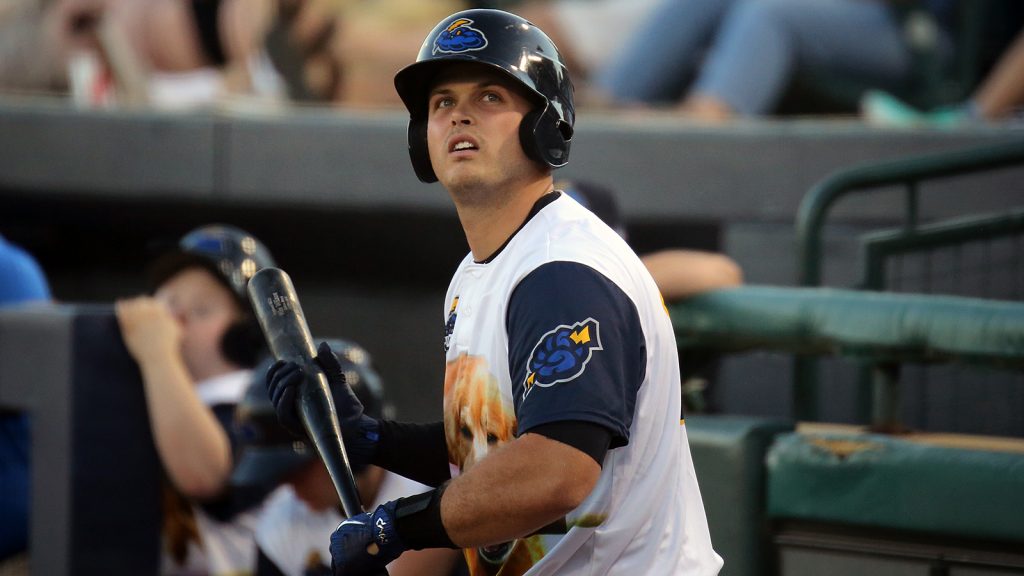 Catcher Wes Wilson is now a free agent, but it wouldn’t be surprising to see him back as a player or as a coach in 2018 (Martin Griff)

Wilson signed with the Yankees as an undrafted free agent out of Indiana in 2011. During his time with the New York Yankees, he spent the bulk of seven years with Tampa. This year, Wilson appeared in 45 games, and 39 of them were with Tampa (six with Trenton). Like the other catchers, he didn’t have a high batting average (.161), but he only allowed two passed balls the entire season.

Moving on to the position players, Solano is a name some fans will be familiar with since he played in the Bronx in 2016 for nine games. This year, he was the primary second baseman in Scranton. In 99 games, he had a slash line of .282/.329/.391 with four home runs and 48 RBI’s. His 29 doubles were the most of any player on the Railriders.

Back in 211, the Yankees drafted Bichette Jr. in the first round (51st overall) out of Orangewood Christian High School in Florida. In his seven seasons with the Yankees, the first baseman/third baseman never hit more than 11 home runs in a particular year. This season, with Trenton, the 25-year-old had four home runs, 33 RBI’s, and a .352 on-base and slugging percentage. He did have 35 walks in 72 games, which was the fourth most on the Thunder roster.

Culver was another former Yankees first-round pick as New York took him 32nd overall in 2010 out of Irondequoit High School in New York. This past season, the 25-year-old spent the entire year in Scranton after playing 32 combined games there in 2015 and 2016. With the Railriders this year, he played all over the infield and had five appearances in left field. He had a career-high 12 home runs in 103 games. Despite the power surge, he hit just .223 for the year, and that includes a .192 average in his final 42 games.

Williams was a fourth-round pick for the Yankees in 2010 out of West Orange High School in Florida. The 26-year-old outfielder appeared in 25 big league games with the Yankees since 2015 but spent time on the disabled list in the two seasons before this year. With Scranton in 2017, he had a slash line of .296/.313/.376 with 23 RBI’s and just one stolen base. That is very little for someone who had 118 stolen bases in his minor league career with the Yankees in six seasons. However, he did have a .309 average in 25 games in August this year.