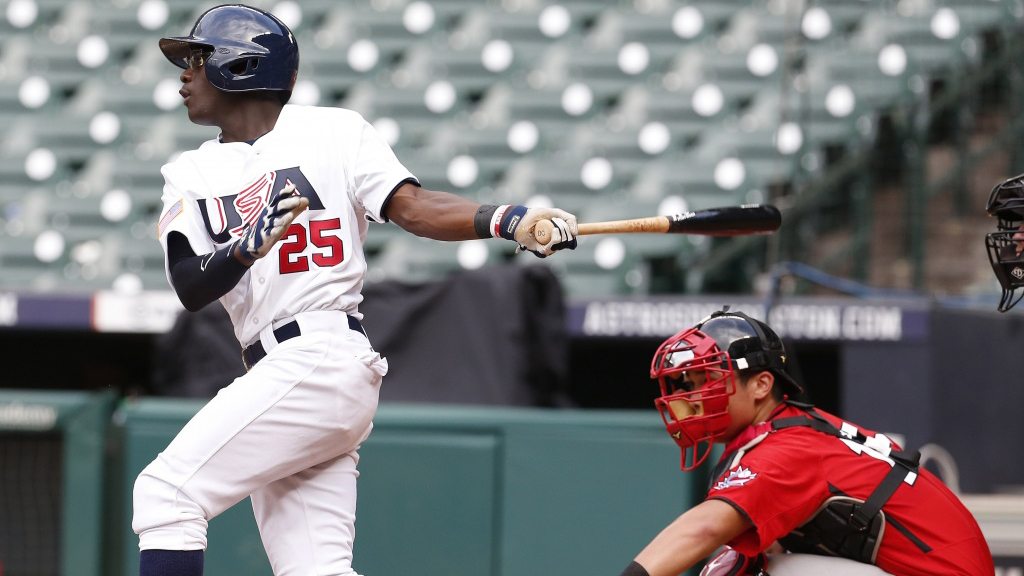 The last name might bring back memories of Mike Cameron robbing Yankees and other players of home runs in his prime.  Dazmon is his son and one of the top prospects in the 2015 MLB player draft.  The reason that the Yankees will be all of Cameron is his stock is falling slightly.

Coming into this year Cameron was the odds on favorite to go number one overall with writers discussing his Upton like upside.  While scouts haven’t seen the growth that they thought he should have Cameron still is a very good prospect and one that should go in the top 20 picks in the draft.

Here is what Keith Law said about Cameron

“12. Daz Cameron, OF, Eagle’s Landing Christian Academy (McDonough, Ga.)
The son of former All-Star center fielder Mike Cameron (yes, you are that old), Cameron has been a well-known name in scouting circles, as he has appeared in seemingly every summer event the past few years. While he’s no longer a presumed candidate for the first selection in the draft, he’s still a very intriguing prospect as an outfielder with pop from the right side and a chance to be a solid center fielder, like his father.”

Another reason the Yankees will be very interested in Cameron is because they have draft kids of professional athletes believing that they are more apt to handle the life because they grew up in it.  I’m not sure that has really helped Dante Bichette or Mason Williams.  Bloodlines are something all teams scout and Cameron is the most high profile guy in this draft.

Getting a kid who was projected to go number one overall and who has some great skills would be great for the Yankees and their first round pick.  There is huge upside if Cameron gets to them on June 5th and I believe if he is there they will take him.  He just has to get there.