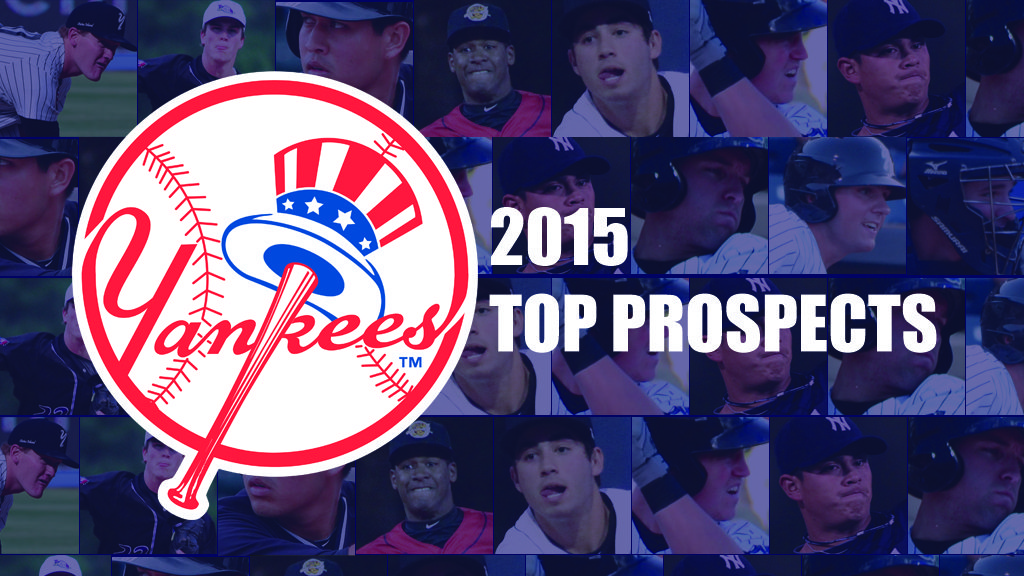 Spring training is almost here, and now is the time to take a look at the top prospects in the New York Yankees organization.  We went through each writer’s top prospect list, consulted with scouts and coaches to determine our own top 20 prospect list.   For reference this list does not include any player who has reached MLB. Now let’s take a look at prospects that ranked number 20-11 on our list. Be sure to keep checking the site throughout the week as we will have more detailed player profiles for each player on our top 20 list.
[/nextpage]
[nextpage title=”#20″ ]

Leonardo Molina with the Gulf Coast Yankees in 2014 (Bryan Green)

The Yankees signed center fielder Leonardo Molina in 2013 for $1.4 million out of the Dominican Republic. In his first professional season he played for the Gulf Coast Yankees where he hit just .193 in 192 at bats with 10 doubles and a homerun. At 16 years old he was over three years younger than the majority of his competition but has the tools to excel in the system.

With a fastball that can come at you at 95 miles per hour and the mentality to battle every batter he faces it is no wonder why Ty Hensley is our number 19 on our list of New York Yankees top prospects. The right-handed pitcher has had some setbacks due to multiple injuries but he is healthy and ready to rise in the system. Originally drafted in 2012, Hensley pitched just 12 innings before being shut down and five surgeries plus a year later he returned to the game he loved so much. In 11 games, 10 starts, he pitched 30.2 innings striking out 40 batters.

Coming into the 2014 First-Year Player Draft Baseball America ranked right-hander Austin DeCarr as the 65th best prospect in the class. It was sort of surprising that the young righty from Foxborough fell to the Yankees who selected him with the 91st pick of the draft in the third round. As with many young pitchers in the talent rich Gulf Coast League, he saw limited time, throwing just 23.1 innings in 11 games, 8 of them starts. Striking out 24 batters while walking 7 and pitched to a 2-1 record with a 4.63 ERA. Don’t let those stats fool you the kid can pitch. With a low-90s fastball, that has touched 96 miles per hour at some points this year, a changeup and a plus curveball that is in the low 80s DeCarr has the makeup to be a solid starting pitcher in the big leagues.

The New York Yankees have built a strong depth of young, talented shortstops in the low minors and one of them is Dominican infielder Abiatal Avelino. The Yankees signed Avelino in 2012 for $300,000. Avelino is one of several naturally gifted defenders at short in the system. His defense is easily his strength, there is no doubt that Avelino will stick at the position as he moves up. Though injuries derailed his 2014 season, he still has a bat to watch. Before his injury this year he was hitting .294, but just .158 after he got hurt. Don’t be surprised to see his bat return to form in 2015.

Tyler Wade is a player that you could consider to be one of the under-the-radar guys coming into the 2014 season. But now he can be considered one of the Yankees top prospects on the field and at the plate. At 19 years old, Tyler was two and a half years younger than the majority of players he played against in the South Atlantic League, but only three players were able to get more at bats than him the entire season. In 507 at bats, Wade hit .272 with 24 doubles, 6 triples and a homerun. He is expected to start the 2015 season with the Tampa Yankees.

The 2014 season was a bounce back year for the young prospect. In his third taste of Double-A ball, his first full season at the level after injuries, Tyler showed why he is still to be considered one of the Yankees top prospects. In 105 games this season he hit .275 with 20 doubles, 5 triples and 9 homeruns. Not to be ignored is his strong showing in the Arizona Fall League where he hit .304 with 2 homeruns, 13 RBIs in 19 games.

Ramon Flores is another player who it seems like we have been talking about forever but is still young. At 22 years old this past season he hit just .247 in his first taste of Triple-A. But don’t let those stats get you down on him as he battled injuries all season. Now he is healthy and is killing the ball in the winter leagues. In 55 games this winter league season Flores is hitting .340 with 7 doubles, 4 triples and 5 homeruns. He has been an excellent hitter at every level he has played and could help the big club as early as this season.

Jake Cave with the Trenton Thunder in 2014 (Rand Greenblatt)

Jake Cave was a 6th round draft pick in the 2011 draft. He appeared in just 1 game for the Gulf Coast League Yankees in 2011, sat out all of 2012 and then came back in 2013 with a strong season for the Charleston RiverDogs. At 21 years old Cave started the 2014 season with the Tampa Yankees in the Florida State League and after hitting .304 in 90 games he earned a mid-season promotion to Trenton where he hit a respectable .273 in 42 games. Cave just turned 22 and will be entering his first full season at the Double-A level in 2015.

The Yankees selected Eric Jagielo with the 26th overall pick in the first round of the 2013 First-Year Player Draft. Since then he has been touted as one of the Yankees top prospects. Offensively there is no doubt, he has the bat to make him a major leaguer but there is questions about his defense and health that causes him to fall out of our top 10 list.

The only reason that catcher Luis Torrens is not in the top 10 is because of new Yankees prospect Domingo German, whose addition just squeezed him out. It is hard not to like this kid, a former third baseman-turned catcher, Torrens is one of those guys in the farm system you cannot help but root for. He has the tools to be the next great catching prospect, he calls games well, communicates well with the pitchers even with the language barrier and has a bat that is just fun to watch.