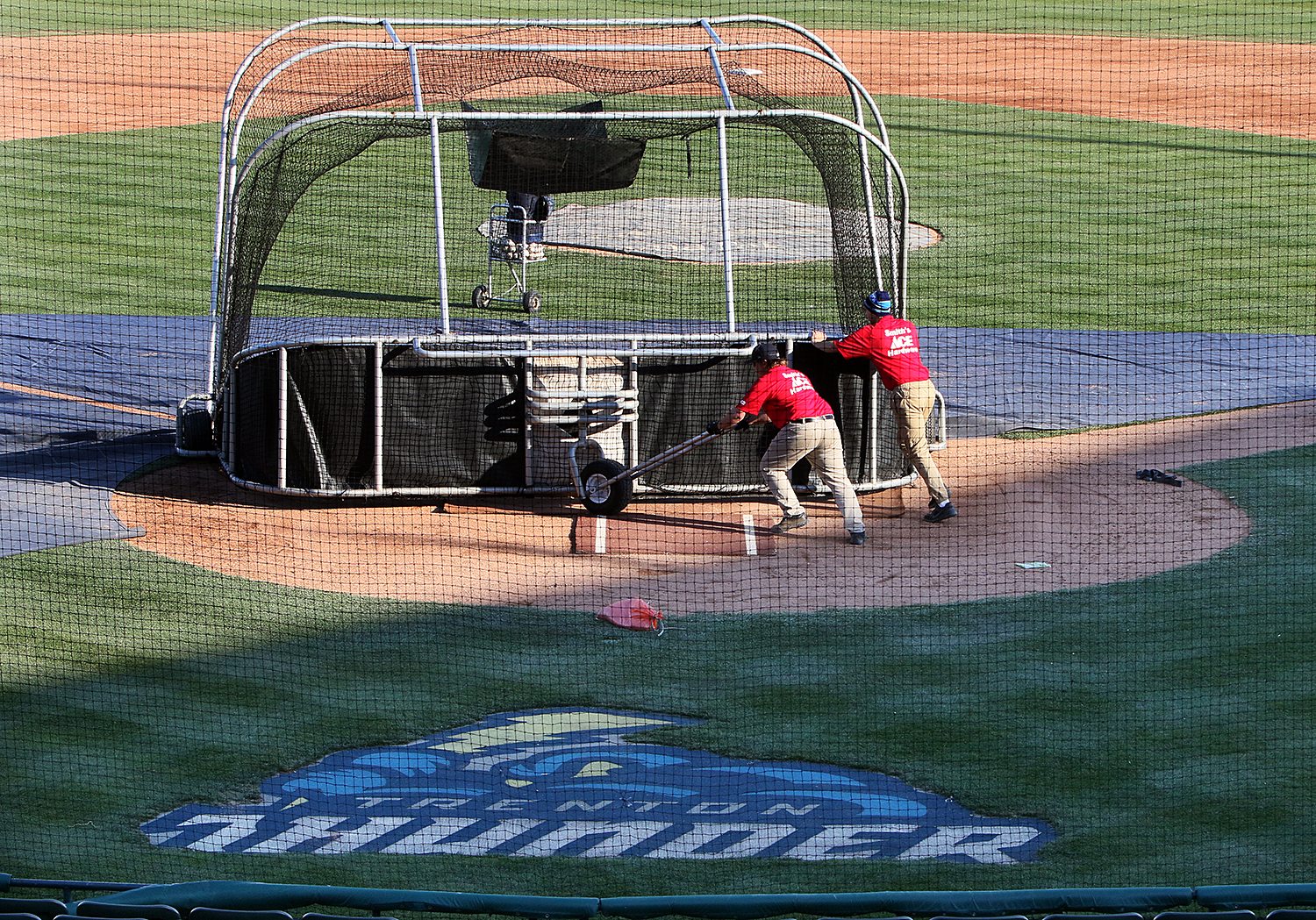 The grounds crew prepares the field at ARM & HAMMER Park in Trenton for an evening game between the Trenton Thunder and Portland Sea Dogs on Wednesday, April 13, 2016. Photo by Martin Griff

With 23 games remaining in the 2016 regular season, the Thunder, Double-A affiliate of the New York Yankees, announced today that fans can purchase tickets to all potential playoff games at ARM & HAMMER Park.

Entering play this evening, the Thunder stand 8.5 games clear of the Hartford Yard Goats for the second and final playoff spot in the Eastern League’s East Division, just 3.0 games back of Reading for the top spot in the division.

Tickets will be available to print-at-home or pick up at the Will Call window the day after the Thunder clinch their exact playoff spot. Fans will receive a refund for tickets to any home playoff games that are not played. Season ticket holders will receive a credit towards their 2016 season ticket package.

The Thunder last played postseason baseball in 2013 and went on to sweep the Binghamton Mets and Harrisburg Senators on their way to their third EL Championship in franchise history.

The Eastern League playoff format is a two-round system of best of three-out-of-five series. In the first round of Divisional Playoffs, the first and second place teams in each division play each other. The division winners then meet for the Eastern League Championship. Below (in bold) are the dates for potential Thunder Playoff Games (dates and times subject to change).

ALL DATES AND TIMES ARE SUBJECT TO CHANGE. VISIT TRENTONTHUNDER.COM FOR THE LATEST SCHEDULE

The Thunder, Double-A Affiliate of the New York Yankees, play in the 12 team Eastern League. The Thunder have drawn over nine million fans to ARM & HAMMER Park over 23 years and have won the three major awards that Minor League Baseball teams can win; the Johnson Trophy for the “Nation’s Best Franchise” (2005), the Larry MacPhail Trophy for Outstanding Club Promotion (2003) and the Bob Frietas Award for Long-Term Success (1998, given by Baseball America). The team has given back over $5.7 million worth of goods, services and monetary donations through Trenton Thunder Charities, under the Grand Slam We Care Foundation umbrella. The Thunder can be found online at trentonthunder.com, facebook.com/trentonthunder, twitter.com/trentonthunder and on youtube.com/AATrentonThunder.