The Charleston RiverDogs have set their lineup for 2017 in a bid to get back to the South Atlantic League Playoffs.

Here’s a look at each position:

Catcher – Donny Sands, drafted in the eighth round of the 2015 draft by the New York Yankees, is slated to be the starting catcher. New RiverDogs manager Pat Osborn is going to make sure he’s well rested. “Donny Sands will be the catcher, I know he’s excited. His first full season. They converted him to a catcher two years ago, and he’s taken to it well. I’m excited for Donny because he has a chance to be a really good player, both offensively and defensively. He’ll be the starter. Eduardo Navas will be the backup, and we’re going to ease Donny into it because it’ll be a long year for him. He is the guy,” Osborn said. 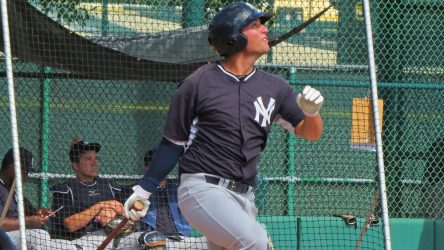 First Base – 2015 Sixth Round Draft pick Brandon Wagner, 6’2” 215 lbs, gets the nod at first base. “Brandon Wagner who was drafted in 2015, played for me in Staten Island that summer. He’ll play first. Isiah Gilliam, he’s an outfielder, but he’ll play over there as well,” Osborn said. 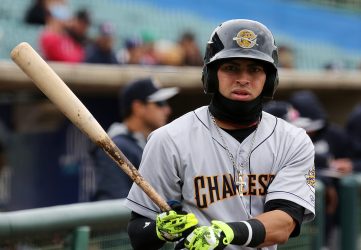 Angel Agular will be playing some third, second and short this season with Charleston. (Martin Griff)

Second Base/Shortstop/Third Base – As with the Yankees organization in general, the RiverDogs are stacked in the middle infield. “You got a combination of four guys. Diego Castillo, Angel Aguilar, Hoy (Jun) Park and Oswaldo Cabrera. Those guys can all play second and short. It’s kind of a mix and match. Oswaldo Cabrera, Angel Aguilar, they’ll take care of third base, and then Diego and Hoy will play up the middle. But the other two guys, Oswaldo and Diego have the ability to play second and short as well,” Osborn said. 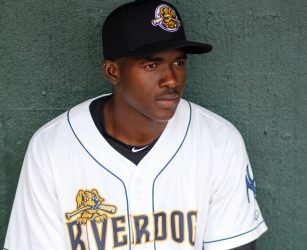 Outfield – The RiverDogs will have an excellent and speedy defensive outfield. “There’s (Estevan) Florial, Blake Rutherford, Leo[nardo] Molina, Carlos Vidal and Isiah Gilliam, so there are five outfielders,” Osborn said. Florial and Rutherford will share time in centerfield. “They’ll both play center field, we kind of do an eight-game playing matrix type thing, and they’ll both get four games in centerfield to start out, and then mix and match the other days on the corners and at DH. They’re both exciting players in centerfield, and they’ll share the workload.”

Osborn also has great expectations of his offense, which he expects to be a versatile attack. “It’s very well balanced. We have some speed, some power. There’s gap to gap power. I think we got the ability to score a lot of runs. Playing here (at Joe Riley Park in Charleston), this park plays big. Hopefully, with the way the team has been put together, we can kind of hit balls and the gap power will show more. When we get on the road to more offensive friendly parks, there will be some home runs hit,” Osborn said.