Luis Medina was the New York Yankees’  top International signing during the 2015-2016 period.  At the time, the Yankees were under penalty from their excessive spending the previous year.  The maximum they could sign any player for was $300,000.  Medina inked for $280,000 plus a scholarship for an additional $120,000.

At the time of his signing, the 16-year-old right-hander was throwing 91-94 mph, topping out at 96.  He stands at 6’1” and weighs 175 pounds and is surely not done growing.  He got his feet wet last year, pitching in the Dominican Summer League throwing just 4 2/3 innings.  He saw limited action due to injury but none were major enough to worry too much about. 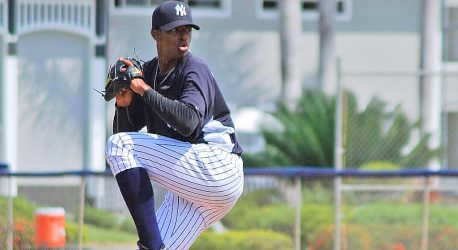 The native of Nagua, Dominican Republic was 2.1 years younger than the average age of the DSL players. Baseball America has confirmed that his fastball is now topping out at 100 mph. It isn’t hard to imagine that the teenager adds some additional velocity to his heater.

I spoke with this young man recently.  I asked him what he is hoping to accomplish in the upcoming year.  His reply:

“For 2017, I want to continue helping people in need and be an example for (the community) where I grew up. I will continue to work hard to (prepare for) my future and to reach the Major Leagues.  And to continue my life walking with God.”

Still, only 17 and extremely raw, Medina will likely pitch in the Dominican Republic again this year.  He needs to build his durability so he can pitch more innings and develop secondary pitches.

The Yankees have been accumulating more and more hard-throwing young pitchers, hoping to turn them into dominant pitchers.  If Medina can progress, we should see him stateside shortly.  In a farm system loaded with impact players, Medina is hoping to add his name to the list of players to watch.