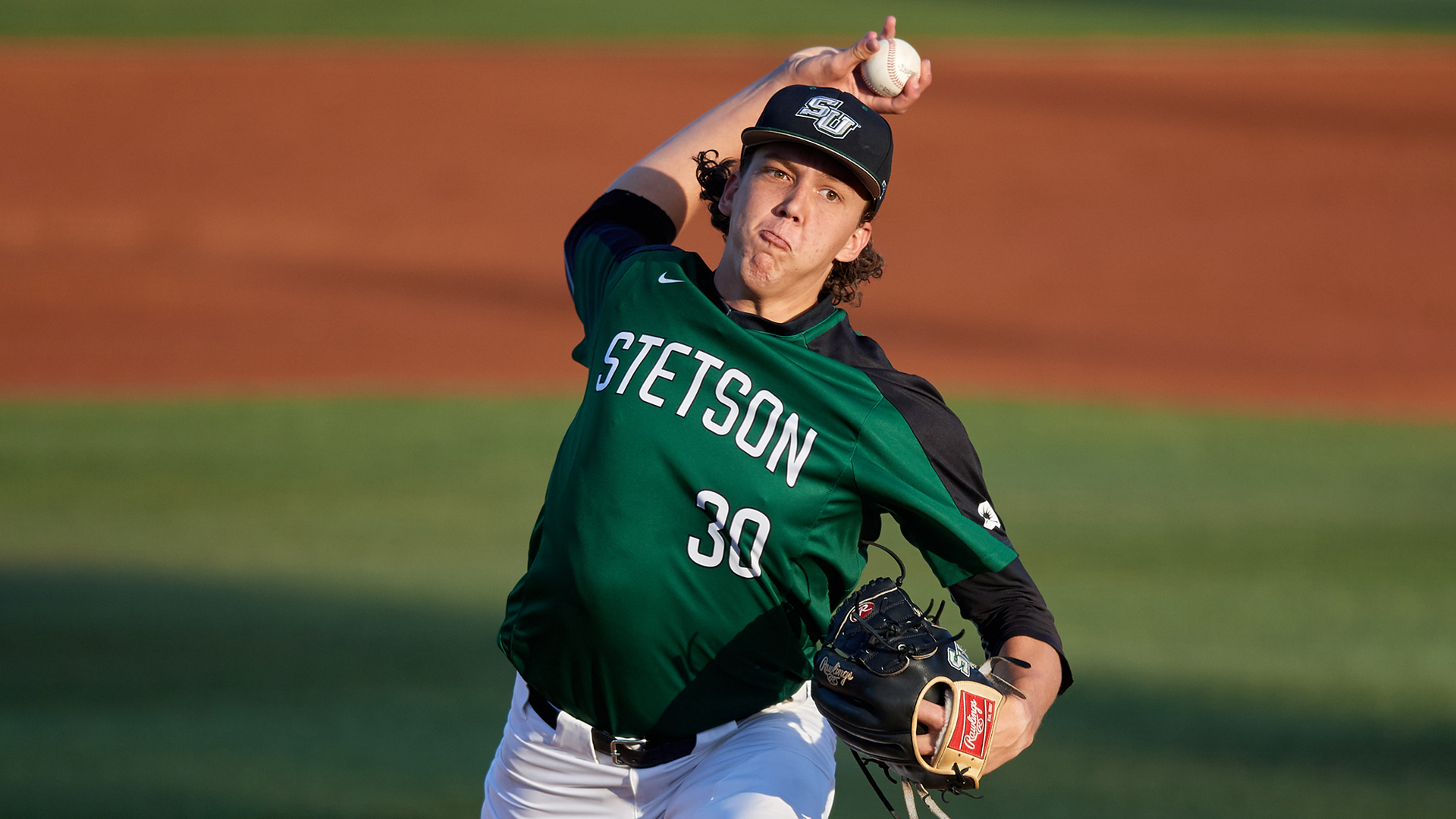 In this year’s MLB First-Year Player Draft, there is a prominent pitcher in the first round out of Stetson University. When you think of Stetson, some names that come to mind are Jacob deGrom (Mets) and Corey Kluber (Indians), who are both aces in their respective rotations. This year, Logan Gilbert has brought in a lot of draft buzz.

Gilbert is six-foot-six and 225 pounds and he has dominated in the Atlantic Sun Conference. Over the last two seasons, since he became a starter, he is 20-1 in 27 starts. This season alone, he has gone less than seven innings in an outing only five times, has thrown over 100 pitches in all but one start, and has struck out ten or more batters nine times (14 against NJIT on April 20).

Here is video of Gilbert’s start against Maryland on March 23 from 2080 Baseball. In that start, he went 8.1 innings, gave up two runs on four hits, struck out ten, and walked one in a win over a Big Ten opponent:

When you look at Gilbert’s arsenal, he has a fastball that can reach up to 94 miles-per-hour and has a curveball, changeup, and slider as his secondary pitches. Earlier this year, Wayne Cavadi of Minor League Ball was at one of Gilbert’s outings and had these thoughts on how Gilbert pitches:

“I saw some reports saying that he hits the upper-90s, but he sat 91-93, topping out at 94. The pitch looked like a plus two-seamer that moved. When he missed, it seemed to be in the same spot just a tad high…. He has three secondary offerings. The curveball was nice when used. It was at 70-75 and we saw two of the nicer ones right around 72, so he can take a lot off of it. He also mixes in a changeup and slider.”

While Casey Mize (Auburn) and Brady Singer (Florida) are the two most-hyped college pitchers in this draft, Gilbert is in the second tier of pitchers that will be available in the middle of the first round. Baseball America (subscription required) has Gilbert going to the Cubs at 24. Meanwhile, Perfect Game has him going to the Cardinals with the 18th pick and FanGraphs has the right-hander going to the Angels with the 17th pick.

The question for the Yankees is whether or not they would take a college pitcher in the First Round for the second year in a row. Last year, they selected right-hander Clarke Schmidt out of South Carolina and their bonus pool this season is 26th in all of baseball.

With that being said, if Gilbert does fall to the 23rd pick, it would be hard for the Yankees to pass him up as they continue to improve their pitching depth in the lower tiers of the minor league system.

So, while most of the names being connected to the Yankees are high-school/prep school players, keep an eye on whether or not some of the college pitchers start to fall on the first night of the draft (June 4). If they do, then the organization could take Gilbert or another pitcher if he is the best player on their draft board.

Gilbert may not have pitched against some of the top competition in the country. However, his consistency and dominance in the Atlantic Sun should not get overlooked on draft night.