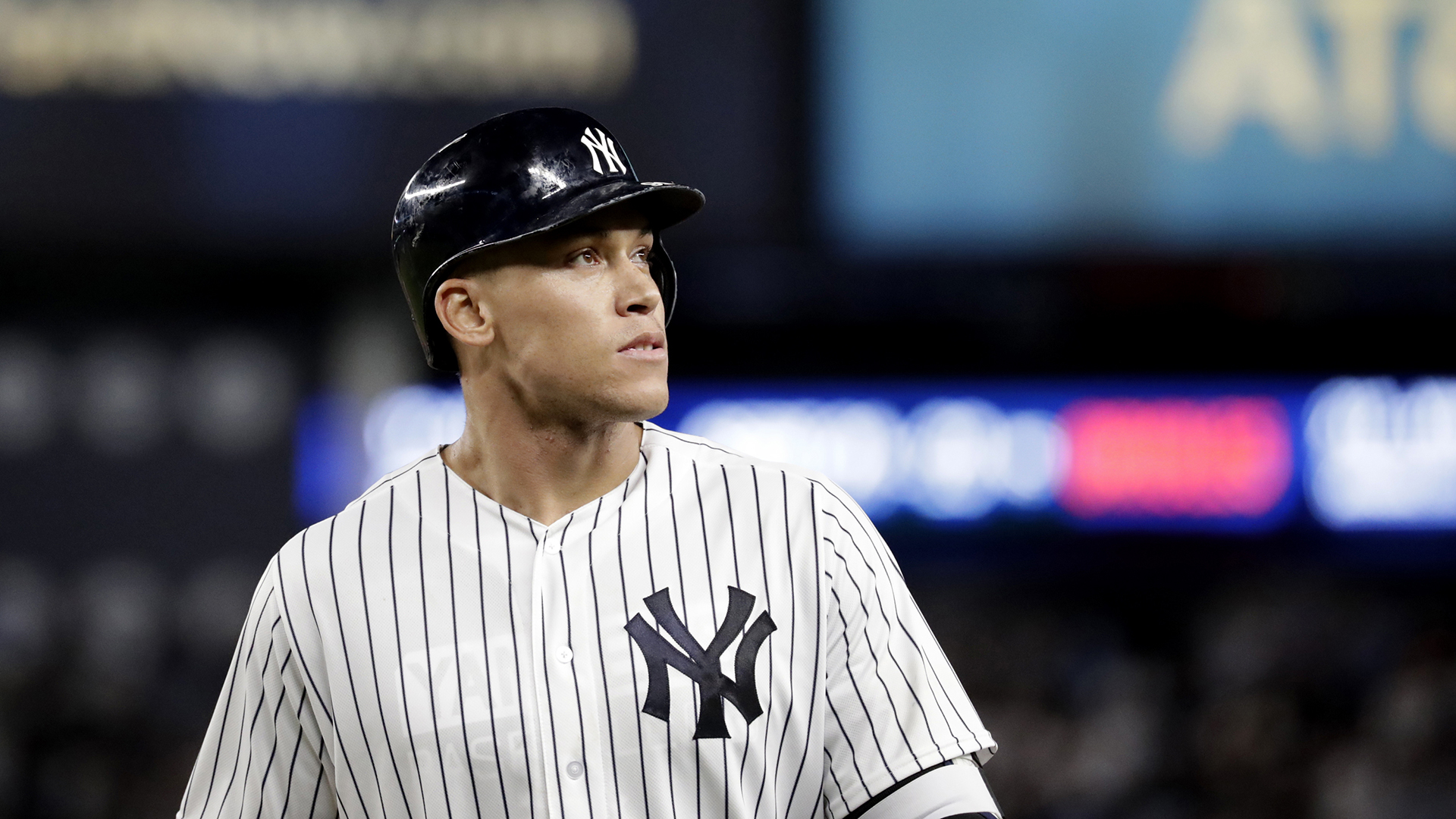 New York Yankees' Aaron Judge looks toward the stands after flying out on a pitch from Boston Red Sox starting pitcher Nathan Eovaldi during the sixth inning of a baseball game, Tuesday, Sept. 18, 2018, in New York. (AP Photo/Julio Cortez)

Welcome to part five of our six-part New York Yankees spring training preview. Today we will dissect the Yankees outfielders. After expressing little or no interest in left-handed mega-star Bryce Harper this offseason, the New York Yankees looked to be all set in this department after re-signing veteran Brett Gardner to a one-year, $7.5 million deal early in the offseason.

The club will most likely leave their spring home in Tampa, Florida on their trek north with five outfielders occupying spots on the 25-man roster. Barring injury or an unforeseen trade, Aaron Judge, Giancarlo Stanton, Aaron Hicks, Brett Gardner, and Clint Frazier will all hear their names called at Yankee Stadium on Opening Day against the Baltimore Orioles on Thursday, March 28th.

Frazier and Estevan Florial head the list of promising young players to watch closely in the next month or so. They both are at different stages in their careers, as Frazier is much closer to being big-league ready, the pair will do their best to impress the Yankees brass this spring.

Now, without further-ado, let’s take a look at each outfielder invited to Major League camp. 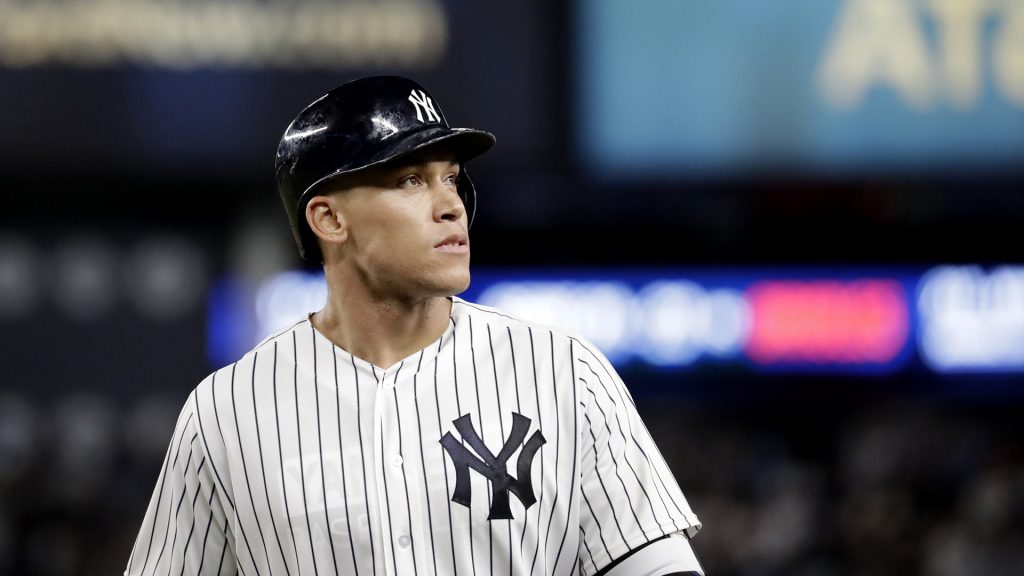 New York Yankees’ Aaron Judge looks toward the stands after flying out on a pitch from Boston Red Sox starting pitcher Nathan Eovaldi during the sixth inning of a baseball game, Tuesday, Sept. 18, 2018, in New York. (AP Photo/Julio Cortez)

Judge is a lock to man right-field for the Yankees for quite possibly the next decade. After following up a historic rookie campaign with another All-Star season, look for the Linden, California native to continue to produce at elite levels. Health is the key for the Fresno State alum. With his right wrist being healed up following last season’s right wrist fracture, Judge enters camp with a clean bill of health.

Over the course of his career, the 6’7” slugger is a career .275/.372/.497 hitter during the spring. While exhibition numbers don’t mean much, you can expect Judge to be well Aaron Judge this spring. Not too much for him to work on either as he is elite in all facets of the game. Pretty much, if Judge is healthy on the team’s way to New York in late March, the Yankees should be set to compete for a 28th World Championship. 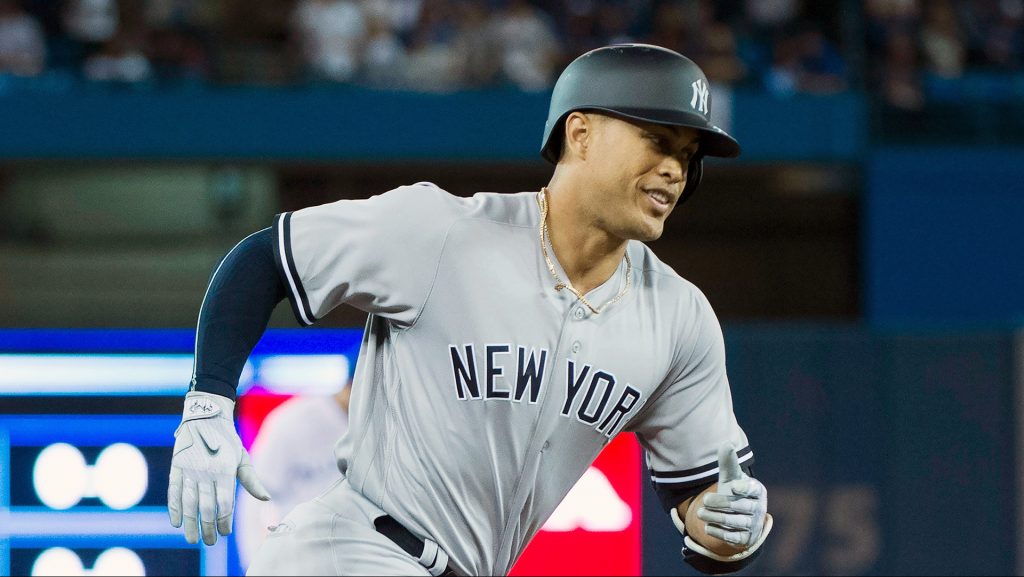 I predict that Stanton will get his fair share of reps in left field over the next month or so. While the 29-year old played 36 games in left field and 37 in right field last regular season, Stanton will most likely be needed in left this season. With a declining Gardner tentatively scheduled to be in left, who knows what the veteran outfielder has left in the tank. It would be wise for the Yankees to give him work out there just in case.

The Panorama, California native appeared in 86 games as a designated hitter in 2018. His role in 2019 will most likely mirror last season’s. With Judge penciled in as a franchise right fielder, the only time Stanton will appear out in right will be to give his teammate an occasional day off.

With his acceptance of the DH role for the first time in his career, he really put together a nice season despite a horrendous start and failure to replicate his 2017 National League Most Valuable Player numbers. Similar to Judge, if Stanton is healthy come March 28th, spring training was a success. 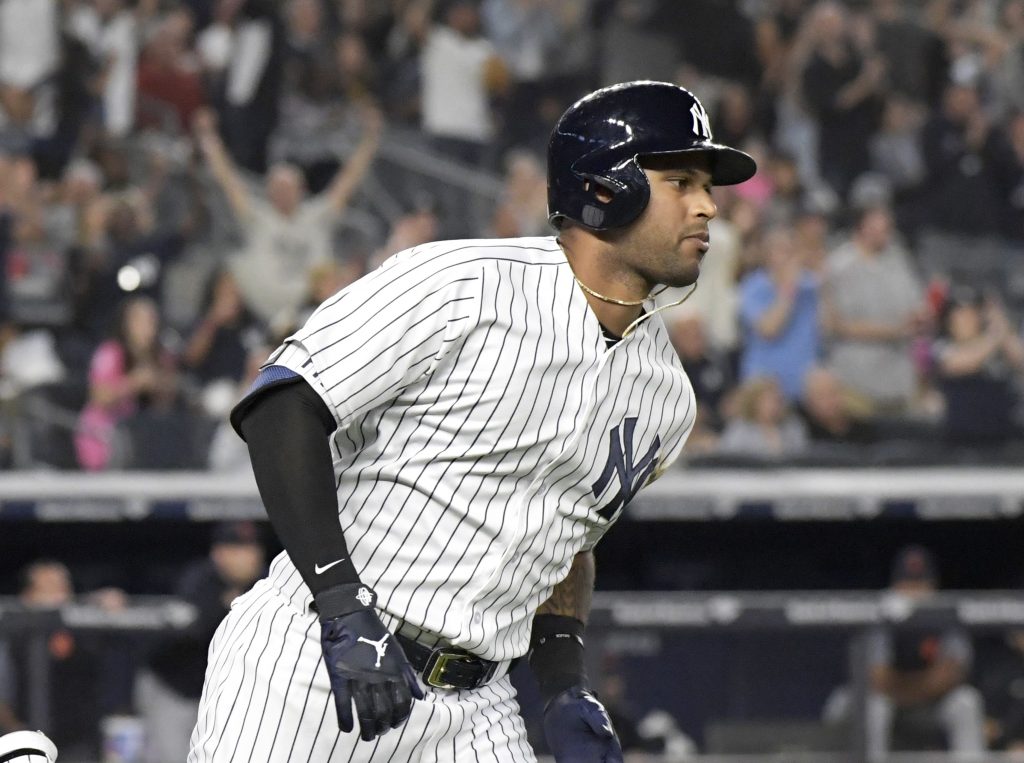 New York Yankees’ Aaron Hicks rounds the bases with a home run during the sixth inning of a baseball game against the Detroit Tigers, Friday, Aug. 31, 2018, at Yankee Stadium in New York. (AP Photo/Bill Kostroun)

Hicks is entering his walk year, as the San Pedro, California native is set to become a free agent this upcoming offseason. The 29-year old has come a long way since being traded to New York by the Minnesota Twins back in November of 2015.

The former first-round draft pick, plays a pretty good centerfield and has proven he can hit for power. The biggest facet that lacks in his game is hitting for average. I would really like for Hicks to really work on this during the spring by controlling the strike zone better. Hicks will look to prepare himself for a career-year in which he looks to secure a big payday following the season. 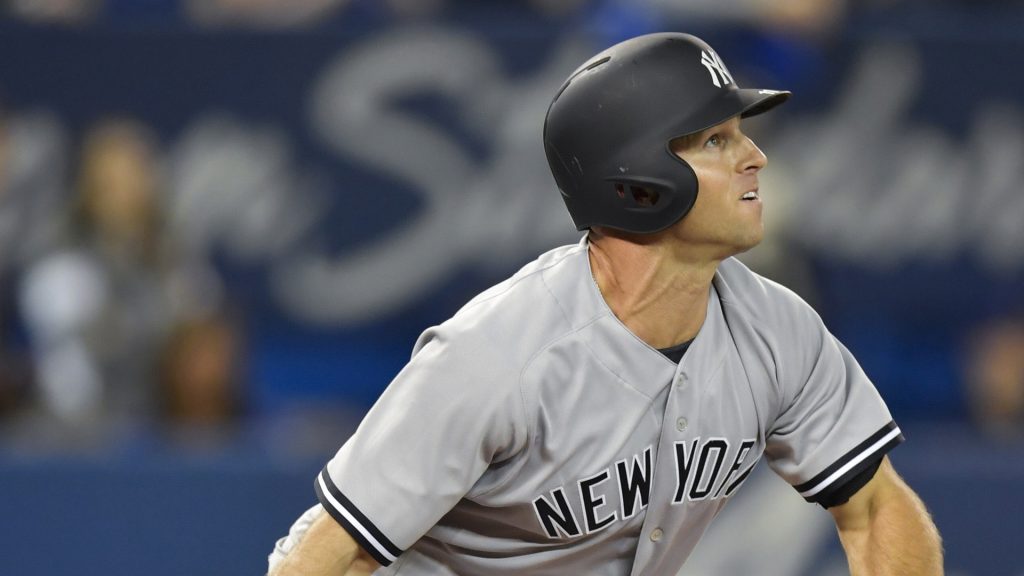 New York quickly signed their veteran clubhouse leader to a $7.5 million after buying out the remainder of his previous contract (for $2 million) that would have seen the South Carolina native earn $12.5 million in 2019.

Gardner, 35, is the longest tenured Yankee as he has spent the entire duration for his 11-year career with New York.

Despite declining offensive numbers, the left fielder remains one of the best defensive outfielders in all of baseball. The former Gold Glove winner, hit .236 at the plate with 12 homers and 45 RBI’s in 2018. He manned left field 107 times during the regular season, which was the most of any player on the roster.

Look for ‘Gardy’ to try to stake his claim and remain a regular-season starter during spring training. He will battle the now-healthy Clint Frazier, who has been very vocal in the media that he is coming for Gardner’s spot this spring.

Frazier, 24, has the most riding on spring training out of any Yankees outfielder. He’s playing not only for a spot on the 25-man roster, but playing time as well.

After sustaining a concussion last spring, Frazier battled symptoms as a result of the injury for the entire duration of 2018. This set back put Frazier in a place where he needs to go out and prove himself. Thus far in his career, he has had just two short stints in the big leagues. They have garnered mixed results.

The Georgia native enters camp with a clean bill of health and has been very public in stating his desire to not only crack the 25-man roster, but start on Opening Day and beyond for the ‘Bronx Bombers’.

After missing the entire 2018 season with hip and oblique injuries, it was announced that Ellsbury will not show up to camp until late March due to a battle with plantar fasciitis.

Signed to a seven-year, $153 million contact in the offseason of 2013, Ellsbury has been deadweight and for the Yankees for several years. With $42.2 million guaranteed left on his pact, and a $5 million buyout for his 2021 option many are wondering if its best to just cut ties with the 35-year old.

The former starting centerfielder is all but a lock to begin the season on the injured list and in my opinion, it wouldn’t be a wise bet to say that Ellsbury will become a factor in the Yankees future plans again.

After a disappointing 2018 and Arizona Fall League appearance in the offseason, Florial looks to regain his once sky-high prospect stock. Despite his offensive struggles, he is still almost unanimously ranked by every media outlet as the Yankees top prospect.

Florial will most likely begin 2019 in Tampa, Florida playing for the Tampa Tarpons (Single-A Advanced). Look for the potential five-tool player to earn a early-season promotion to the Trenton Thunder (Double-A).