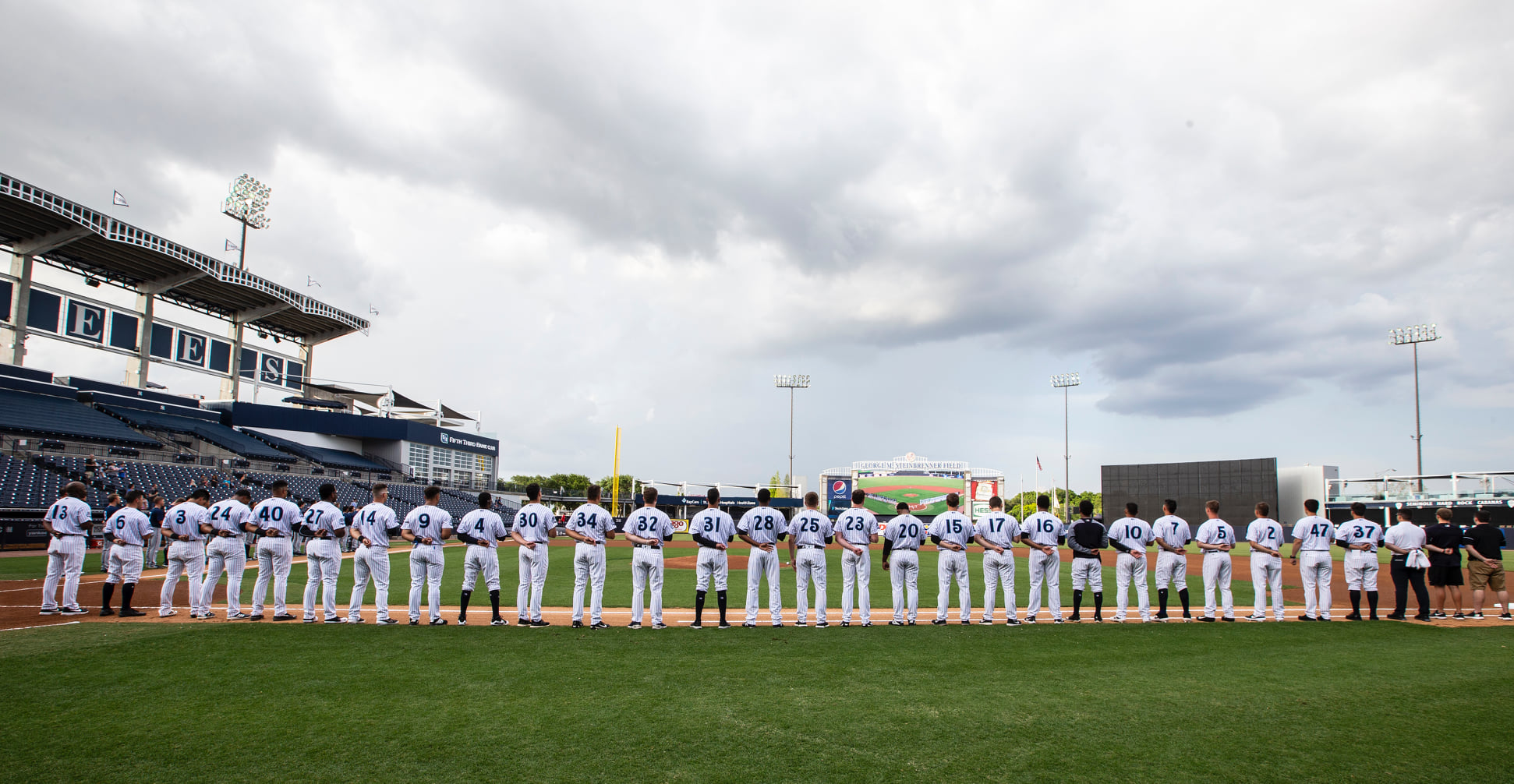 According to multiple reports, Major League Baseball has confirmed and will officially announce this afternoon the cancellation of the 2020 Minor League Baseball season. Teams have been told they can make their announcements following the official announcement from MLB & MiLB. As a result, the season is officially over for the following New York Yankees affiliates: GCL Yankees West (R), GCL Yankees East (R), DSL Yankees (R), Pulaski Yankees (R), Staten Island Yankees (SS), Charleston River Dogs (A), Tampa Tarpons (A-Advanced), Trenton Thunder (AA), and the Scranton/Wilkes-Barre RailRiders (AAA). This news comes out after we find out that Scranton’s PNC Field will host the Yankees taxi squad this summer.

This inevitable news has been looming and while it was expected, this still comes as a major blow to players who have been told to “stay ready” in the case and who were holding onto hope that they would see game action this season. While many Yankee’s minor leaguers are included on the 60-player player pool for “Summer Camp” training, for many others, they are left without a 2020 season and no game action.

“We are disappointed to share with our fans and partners that the 2020 season has been canceled due to COVID-19,” said Thunder GM/COO Jeff Hurley in a statement to the press. “Our staff is already making exciting plans for your Trenton Thunder baseball to return Bigger, Better and Safer than ever in April 2021. We look forward to hosting all the smiles at the newly upgraded ARM & HAMMER Park, home of the best entertainment in the region in a very safe environment. Our entire Thunder family of fans and sponsors will be a part of the Great Comeback of your Trenton Thunder when we celebrate together the 2021 season on the banks of the Delaware River.” 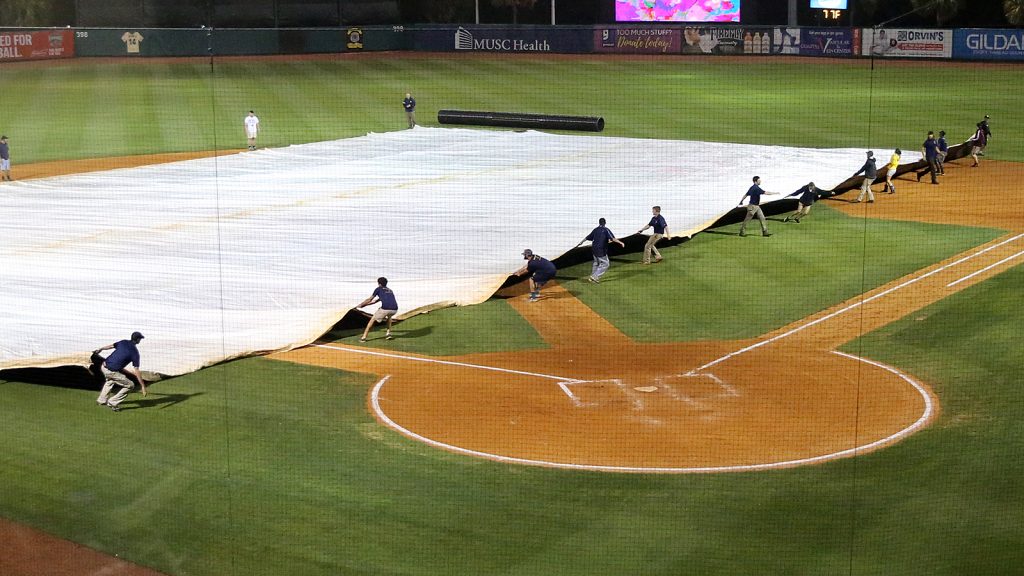 Who would have thought there be a day when we long for the sight of tarp pulls. (Martin Griff)

For teams in the Florida State League, including the Yankees’ Advanced-A affiliate Tampa Tarpons, they have not played a game since August 29, 2019, after the 2019 season was cut short and playoffs were canceled due to the impending impacts of Hurricane Dorian. The Yankees Gulf-Coast League teams were also affected as the state of Florida shut down to brace for possible impacts of Hurricane. For these affiliates and all of the Yankees’ minor league affiliates, they now see their 2020 season canceled completely due to the Coronavirus.

“Although not unexpected, the RiverDogs organization is saddened by this news. However, our ownership and staff are hard at work to ensure that we continue to Make Fun for our fans in Charleston,” said RiverDogs President and General Manager Dave Echols in a press release. “We take our commitment to the Holy City community very seriously. This announcement provides us with an opportunity to showcase the ballpark and the Segra Club on a more comprehensive level than would be afforded during a typical baseball season.”

n recent months, we have seen two possible ideas tossed around for minor league players to get some playing time. These include the possibility of an extended Arizona/Florida Fall League played at Spring Training sites, or an expanded summer/fall instructional league similar to extended spring training.

Currently, COVID-19 numbers in Florida and Arizona are spiking, however, professional sports, including baseball and basketball, have been cleared to move forward and progress with a season. These two options have not been confirmed and are speculated ideas from MLB that could be possibilities for getting players who have remained ready for months, playing time in 2020.

When the Yankees’ open their 2020 regular season against the Washington Nationals on July 23rd, the remaining 30 players assigned to the ‘taxi squad’ will report to PNC Field in Moosic, PA, as we reported in an article earlier this afternoon. The Yankees’ current 2020 player pool included 58 players, including many minor leaguers. However, there is still room for the addition of two more players, which could end up being utilized by players who’s seasons came to an end on Tuesday.

Today, June 30 also marks the end of the payment period committed to by the Yankees for their minor league players. 45 players were cut earlier this month as it was expected that the season would be inevitably canceled due to COVID-19.

The question now for the Yankees’ minor league affiliates is what comes next. Many have taken financial losses and will undoubtedly receive questions from fans and advertisers asking about refunds, advertising costs, etc. that have already been spent. With the economy negatively affected by COVID—19, many companies who advertise at the MiLB ballparks are also struggling to stay afloat. Therefore, it is expected that they will be counting pennies and trying to salvage as much cost as possible. Another option for teams is to get creative with their use of their ballparks while they face an extended off-season. For example, the twins’ AA affiliate Pensacola Blue Wahoos have opened a disc-golf course on the weekends and are utilizing their ballpark as a very popular Airbnb. This is an effort to salvage the jobs of its employees and continue to be a community-friendly ballpark for fans. We could see many teams begin to get creative over the weeks and months to come with the 2020 Minor League Baseball season officially over.

Another looming concern for various clubs and minor league affiliates is the expected contraction of Minor League Baseball at the end of the 2020 season. This contraction was expected to occur at the end of the season even before COVID-19 struck, but has become more likely with teams seeing financial losses as a result of the impact of the virus. For the Yankees, the announcement of the cancellation of the 2020 season could be the official end of Rookie-level affiliate, the Staten Island Yankees, who Baseball America reported back in November is on the chopping block as one of the teams on the list of teams facing possible elimination if the contraction does indeed occur at the end of this season. 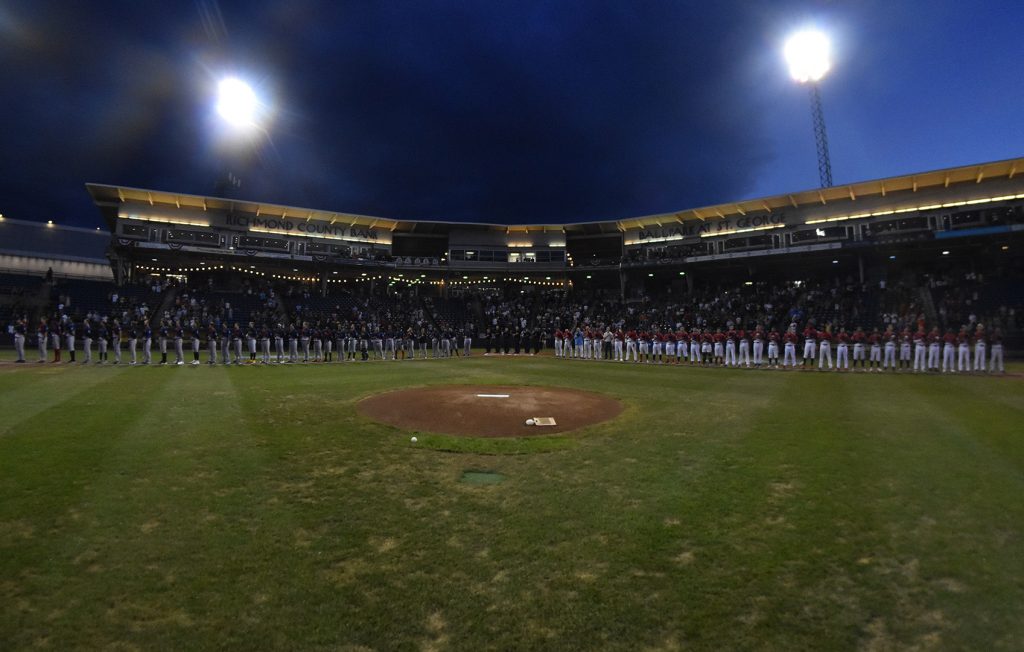 We could have already seen the last game of a Yankees affiliate at the Richmond County Bank Ballpark. (Robert M. Pimpsner)

“We’re thankful an official announcement has been made clarifying the Staten Island Yankees – and all MiLB – seasons,” said Staten Island Yankees President Will Smith via email. “Of course, we are tremendously disappointed we cannot bring our national pastime to Staten Island this summer. We look forward to the day our team, fans, partners, and staff can return to Richmond County Bank Ballpark at St. George and provide our community with much-needed relief from daily life.”

While these contractions are not 100 percent official as of now and the list of teams facing contraction is just a speculation, it is likely that after the 2020 season comes to an end in October, so too, will the affiliation of 42 teams, including the Staten Island Yankees. Another looming concern for various clubs and minor league affiliates is the expected contraction of Minor League teams.

The professional baseball agreement (PBA) between MLB and MiLB is up at the end of this season and with the most recent proposal between the organizations likely to become a reality, the contraction of teams would reduce Minor League Baseball from 160 to 120 teams beginning in the 2021 season. This proposal would also see teams changing leagues. Both sides are expected to formulate and come to an official agreement ahead of the 2021 season. But as we mentioned, should this contraction go through, Staten Island would no longer be an affiliate of Minor League Baseball.

Major League players report to ‘Summer Camp’ tomorrow, with the regular season beginning July 23rd for the Yankees, on the road in Washington. However, for the Yankees’ minor league affiliates and players not included on the 60-man player pool roster, their season has officially come to an abrupt end before even beginning.