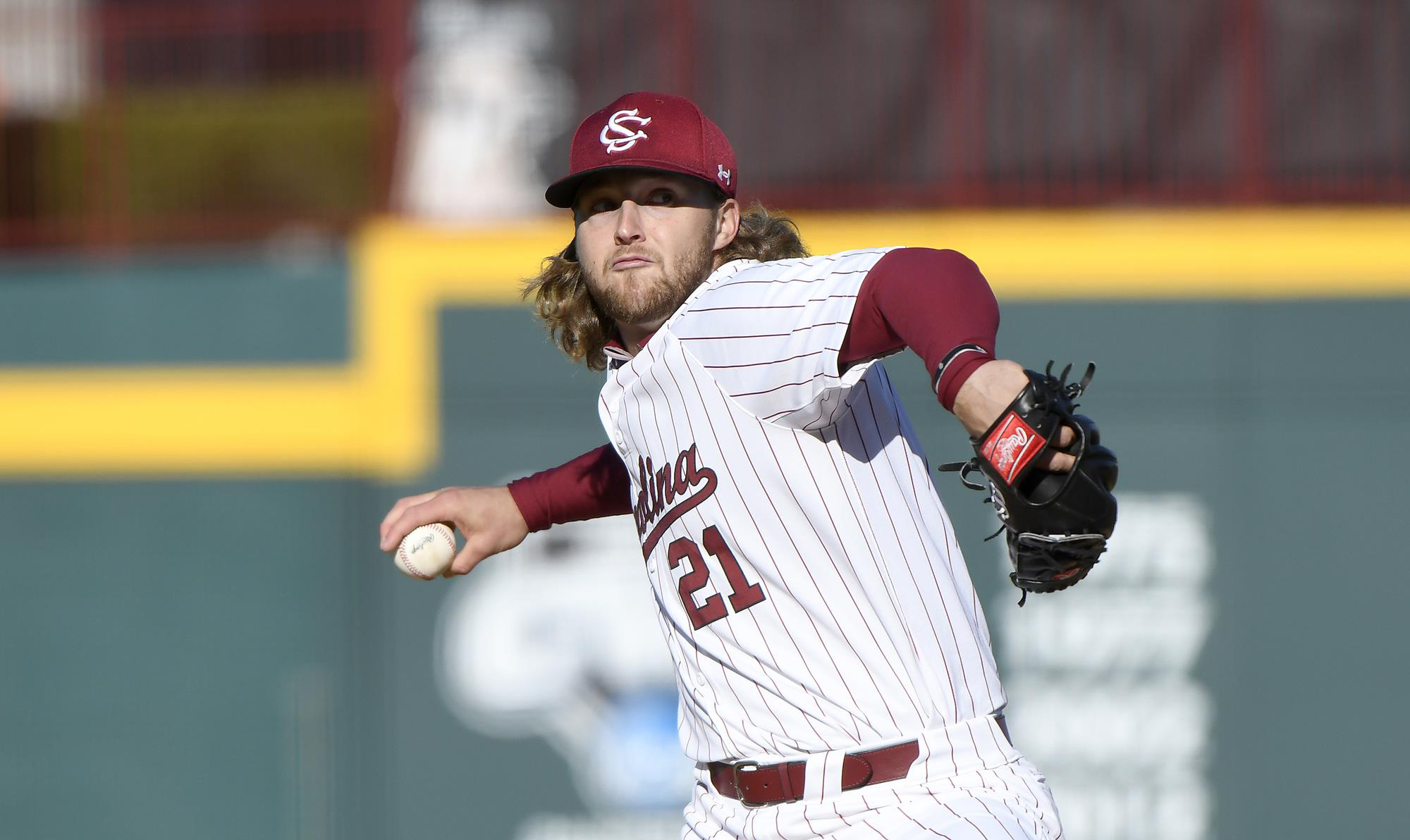 Carmen Mlodzinski began pitching in his junior year in high school. He was still able to turn himself into a top-pitching prospect before the 2017 draft. Heading into the draft, he was rated as the 172nd best overall prospect by Baseball America and the 175th best prep prospect by Perfect Game (PG). PG also ranked him as the best pitcher in South Carolina.

However, before the draft, Mlodzinski informed teams that he intended to stick with his college commitment to the Univerity of South Carolina. This led to Mlodzinski going undrafted in 2017. Most of Mlodzinski’s appearances as a freshman came as a reliever. In total. he pitched 45.2 innings. He put up the following stats: 5.52 ERA, 1.489 WHIP, 4.1 BB/9, and a K/9 of 8.5.

His next season was shortened due to a foot injury he sustained in March of his sophomore year. The injury occurred while pitching when landed on his left foot awkwardly. This injury cost him the rest of his sophomore season. At the time of the injury he only had pitched 10.2 innings. In those innings he had the following numbers: 5.91 ERA, 2.250 WHIP, 9.3 BB/9, and an identical 9.3 K/9.

Fortunately, his injury healed by the summer and he was able to participate in the Cape Cod Baseball League (CCBL). This is where Mlodzinki stock took off, as his stats finally matched his raw talent. In 29.1 innings, he produced the following numbers:2.45 ERA,648 WHIP, 1.2 BB/9, and a K/9 of 12.3.

After the end of the season he was ranked by Baseball America (subscription required) as the second-best prospect in the league and as the best pitcher. Unfortunately, he was not able to carry his momentum into his junior season. In 25.1 innings, he accumulated these stats: 2.84 ERA, 1.303 WHIP, 7.8 K/9, and a BB/9 of 2.8. Overall, his numbers were still better than his freshman and sophomore seasons, but he didn’t show the same dominance that he had in the CCBL. This feature is an example of the type of content that Pinstriped Prospects Dugout Members receive.  Dugout Members get complete access to scouting reports, interviews, and more all with limited advertisements on the website. Click here to sign up!

Below is a video of Mlodzinski striking out a batter in the CCBL:

How is it possible RHP Carmen Mlodzinski of ⁦@GamecockBasebll⁩ didn’t make the ⁦@Official_CCBL⁩ All-Star team?

FB sizzles at 95-96, CV an 83 hammer as he K’s the Cape leading hitter on 3 pitches pic.twitter.com/RXnuE3x8Gb

Mlodzinski was drafting rankings that can be broken down as follows: 21st (MLB.com), 25th (CBS Sports) 27th (BA – subscription), and 37th (FanGraphs). Despite his lack of track record, he is still considered to be a first-round talent. After finishing several other profiles of college pitchers, this is not too surprising. Most of the college arms that might fall to the Yankees have questionable track records. I do not think his track-record is any worse than that of Clayton Beeter, Bryce Jarvis or even Bobby Miller.

Yankees scouting director, Damon Oppenheimer, has made a lot of different types of selection over his 15-year tenure. It isn’t easy to predict what kind of player he likes to draft. However, one thing we know is that he likes to scout the Cape Cod League. So, it’s very likely the Yankees saw Mlodzinski in the Cape, which would mean they saw him at his best. With that in mind, I would not be surprised if he is high on their draft boards.

Another thing to keep in mind is that Mlodzinski attended the University of South Carolina. The Yankees seem to think highly of their program as they’ve made several key selections from that school over the years. Most notably they drafted Clarke Schmidt and Jordan Montgomery, two guys who look like they are on the verge of joining the Yankees rotation.