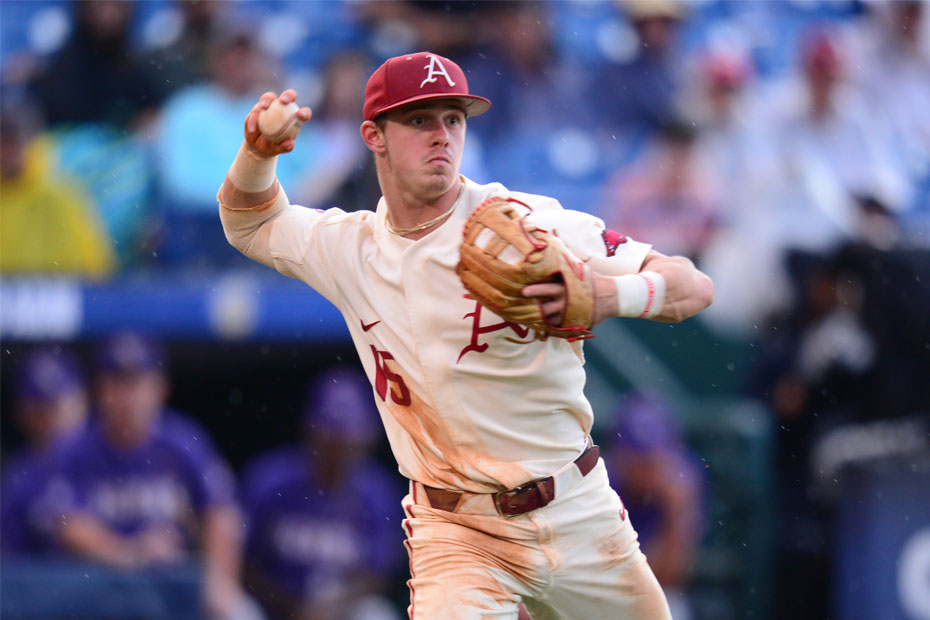 Casey Martin was considered a strong local prospect as a prep player. He was ranked as the third-best prospect in Arkansas by Perfect Game, was named as the 2017 Arkansas Gatorade Player of the Year, and was a part of the 4A All-State and All-Tournament Teams as a junior. However, these accolades and his overall talent were not enough to get him drafted as teams felt that his bat was still raw to enter the minors.

Three years later, he is now a junior at Arkansas University, and while there are still plenty of questions about his bat, his overall game has turned him into a day-one MLB Draft prospect. He started off his college career strong as he had the following slash-line: .345/.418/.556. He regressed the following year and hit: .285/.364/.548. He played one fewer game in 2019 (66) but had 15 more strikeouts, which calls into question whether or not he had the contact ability to be a major league player.

Martin barely had an opportunity to correct the doubts on his hit tool as he only got to play 15 games this year before his junior season was canceled. In those 15 games, he hit: .271/.386/.458/ with 22 strikeouts. Perhaps looking too deeply into that small sample, we can see that he was potentially beginning to turn his season around.

During his first 9 games, he had182 average and had 14 strikeouts. He was benched for a game and worked with the team’s hitting coach to coach to refine his approach and stance. He specifically wanted to work on returning to swing to where it was as a freshman. His work seemingly paid off because in his final six games, he went 10-for-26 and raised his average to .271. He showed a better approach at the plate as he had eight K’s over those 26 at-bats versus 14 in his first 33 at-bats.

In an interview with Matt Jones from wholehogsports.com, Martin details the work he put in to get out of his early season slump:

“Everybody knows I had some mechanical issues and it was causing me to pull off a lot of balls and not see spin out of the hand,” Martin said. “After Houston, after being benched, me and (Arkansas hitting coach Nate) Thompson worked on some stuff. We went back to a toe tap, back to freshman year and I started seeing the ball better, started seeing more spin, started staying on pitches longer and that’s when things started turning around for the better.

The shortened season not only hampered Martin’s ability to prove he can become a better hitter, but also stopped him from showing off his improved base-runner skills. While all scouts agree that Martin is fast, it is worth noting that his speed has not really shown itself in games. His career stolen base total coming into this year was 10 in 66 games. This year, he was beginning to show much more skill at stealing bases, as he was 6-for-6 in attempts in 15 games. This feature is an example of the type of content that Pinstriped Prospects Dugout Members receive.  Dugout Members get complete access to scouting reports, interviews, and more all with limited advertisements on the website. Click here to sign up!

Martin is ranked as the 34th best prospect by FanGraphs, 27th by Baseball America (subscription only), and 30th by MLB.com. Overall, there is a strong chance that Martin will be available at the Yankees pick, which is remarkable when you consider his tools.

Typically, players with Martin’s tools go within the top 10 picks. But, questions of his bat and the fact that he did not really have a junior season has diminished his stock.

With that in mind, it is possible that he might want to bet on himself and return to college. He could really make a lot more money next year if he has a strong season. With that being said, if he is willing to sign a reasonable contract and falls to the Yankees pick, I think he is a player they would consider drafting. The Yankees hired Dillon Lawson as their minor league hitting instructor with the hope that he would help improve their prospects’ pitch-recognition skills and that has really been Martin’s only problem. So, Martin to the Yankees would seem like an ideal pairing.