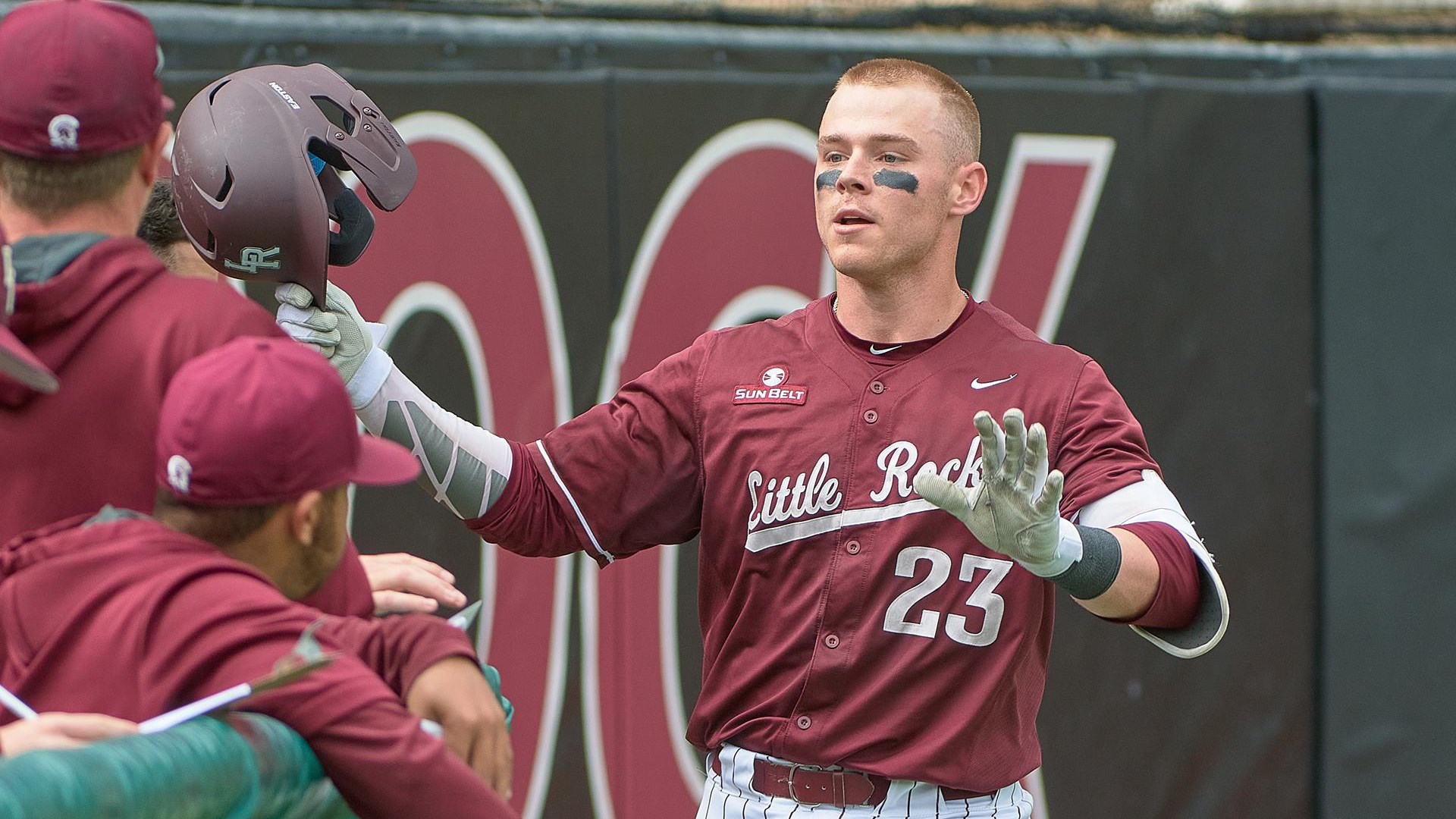 Kale Emshoff was not a well=known high school prospect going into the 2017 MLB draft. However, he did receive a lot of local interest from colleges wanting him to join their baseball program. According to an article from Dan Zielinski of Baseball Prospect Journal, Emshoff chose to attend the University of Arkansas of Little Rock (UALK) because Chris Curry was the club’s manager.

The reason that Emshoff wanted to work with Curry in particular is that Curry was a veteran minor league catcher. Emsoff always took pride in catching and as a prep player posted two videos of containing catching lessons on his YouTube page.

Emshoff clearly cared about being a catcher and felt that Curry could help him get drafted as one. This makes sense, as Curry played the position in the minors for eight-seasons. In an article from Sun Belt Sports, Coach Curry gives his first impression of Kale:

“When Kale arrived here, he had the body of a football tight end,” recalled Curry. “Some junior colleges were interested him, but as a first baseman. That was the perception of him coming out of high school as there were questions as to whether or not he could catch at the college level.”

The other schools that were trying to lure Emshoff wanted him to play first base. Curry’s club lost a catcher and was willing to take a chance on Emshoff. Emshoff’s development was also aided by his new teammate, Cameron Knight. Knight was an established catching prospect who would later end-up being drafted by the St Louis Cardinals.

With the help of Curry and Knight, Emshoff turned into one of the best catching prospects in the 2020 draft.

Emshoff’s journey was anything but easy. He struggled mightily during his freshman year. In 39 games he posted the following stats: .214/.302/.262. Additionally, he hit zero homers, and struck out 30 times. Following the season he went on to play in the MINK Collegiate Summer Baseball League.

MINK league stats are easy to access. So, it’s hard to tell how he did statistically. But we do know how the league impacted him as a hitter. In an interview with Coy Slavik of Callertimes.com, Emshoff describes what he learned in summer ball. Below is an excerpt from the article:

“Going there gave me the opportunity to play a relaxed game of baseball and have fun,” said Emshoff, who batted .269 for the A’s and won the MINK All-Star Game Home Run Derby. “I was relaxing at the plate and seeing the ball as well as I possibly could.”

This improved relaxed approach carried over to his sophomore season. In 56 games as a sophomore, Emshoff put up the following numbers:.273/.377/.415. He also had four homers, 28 walks and 52 strikeouts. Emshoff also received praise for taking a major leadership role on the club. In the before mentioned Callertimes.com article, his coach was quoted stating the following:

“He’s the anchor of our club,” Curry said. “God forbid if we lost Kale. It would spin our team into a bad funk.” Curry also praised the work that Emshoff put in calling baseball games. “The feedback he gives us from a catcher’s standpoint on what hitters are doing has been unbelievable,” Curry said. “He’s going to have a chance to play at the next level. His career is trending really high, really fast.”

After the season ended he went on to play in the Cape Cod Baseball League. However, he was only able to play in three games before injuring his elbow. Emshoff would require Tommy John surgery and ended up having to miss his junior season. He was still a part of team however, as he was used as a first base coach.

Going into the 2020 season, Emshoff made several adjustments at the plate to make his swing more compacted. He broke down the changes in the Zielinski article. Essentially, Emshoff changed his batting stance to incorporate his the lower-half of his body. He worked on cutting down his swing and he claims these changes allowed him to hit for power consistently.

Below is an excerpt from the article where Emshoff describes his adjustments:

I’ve always had the power, but I’d say the new stance allowed me to do it more consistently,” Emshoff said. “Sophomore year, I was kind of standing tall and if I wasn’t on time with the pitch, I didn’t have any power. But now if I am down in my legs and squatted a little more, it just gives me a better chance to barrel up more pitches.”

Below is a video of Emshoff swing in 2020, courtesy of his team’s twitter page.

The changes allowed him to have a dominant 2020 season. In 17 games this season, he put up the following stats: .417/.527/.800. He also had seven homers, 11 strikeouts and 14 walks. His stats show improvement across the board and it led to him being named as a finalist for the 2020 Buster Posey National Collegiate Catcher of the Year Award, which is an award given to the top Division-1 catcher. His performance came in a small size and it wasn’t against the top competition. However, his scouting report suggests that he does have legitimate talent. This feature is an example of the type of content that Pinstriped Prospects Dugout Members receive.  Dugout Members get complete access to scouting reports, interviews, and more all with limited advertisements on the website. Click here to sign up!

I feel that Emshoff would be an appealing late-round target for the Yankees. Emshoff had major draft helium after his hot-start at the plate. It’s possible that if the season had been longer, he would’ve continued to climb up draft boards. People that got to watch him this season were truly impressed. In the above-mentioned Sun Belt Sport article, it mentions that Todd Butler’s opinion on Emshoff.

Todd Butler is a former minor-league baseball player who went on to have a storied college coaching career. He is currently the assistant coach of the Missouri Tigers, and has been involved in college baseball for 27-years. Butler was the head coach of Wichita State from 2013-19 and has also worked for a myriad of programs including McNeese State (1992-94), University of Alabama (1994-2000), and the University of Arkansas (2005-13). In his career he’s coached 150 players that ended up being drafted, including 27 major-league players:

Below is his opinion of Emshoff:

“He was hitting home runs to all parts of the field and you could just tell he was a special talent.”… “I’ve been around this game for a long time, spending 17 years in the SEC, and can say he is one of the best pure hitters I’ve seen,” said Mizzou’s Butler. “Whoever takes him in the draft, they’ll have a solid all-around athlete that is a great hitter, a great fielder and one who clearly has an understanding of the game.”

The Yankees are known to value catchers that can hit. They are known to like high makeup players. Emshoff fits both those categories. He is also the first profiled playe  that might not get selected in the draft. If this happens, I feel like he might be tempted to sign and start his career as a minor-league catcher.