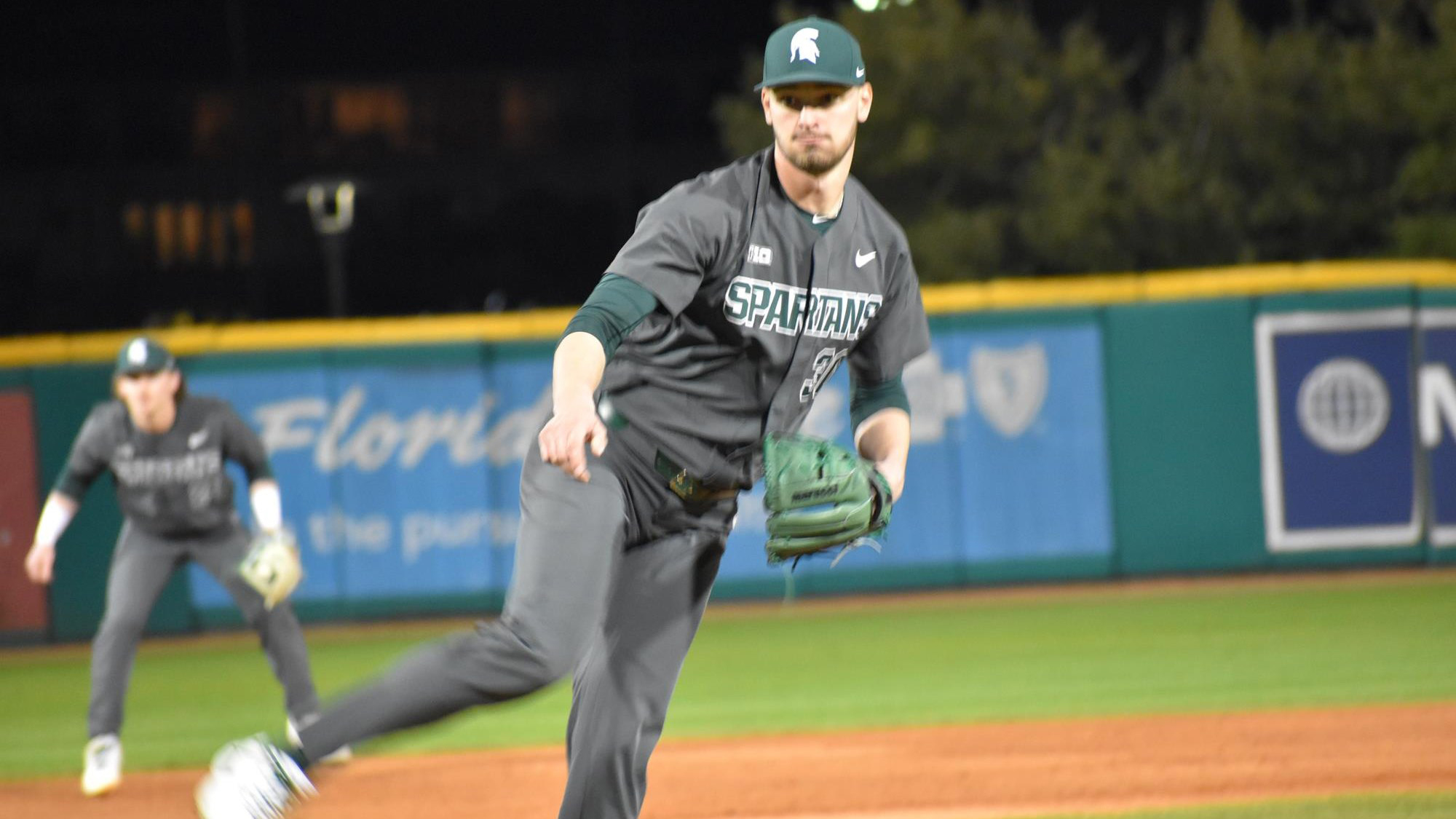 Mason Erla came into 2020 as a guy that really needed a big season to put himself back on the map. Hee certainly accomplished that as he is one of the biggest draft risers in this year’s class. Erla was an interesting prospect coming out of high school. However, over the past few years, he has dealt with injuries and subpar performances, which have damaged his stock.

Erla’s difficulties began in his senior year of high school in 2016. According to Baseball America, Erla had a chance to be ranked as the best prep prospect in the state of Michigan, but he sustained a knee injury playing football. This injury crushed his draft stock and he went undrafted in the 2016 draft. After the draft, Erla enrolled at Michigan State.

Furthermore, he held batters to a .216 average, which was the second-best rate in the Big Ten. He was also 14th in innings pitched, and 16th in strikeouts (63). Erla’s performance led him to be named as a Freshman All-Big-Ten pick. After his redshirt freshman season, he would go on to pitch in the Cape Cod Baseball League but only made one start.

After his disappointing season, Erla elected to skip summer ball and work on his game. Erla worked with his pitching coach, Mark Van Ameyde, to build a program that would lead to increased velocity.

Phil Friend, who is a writer for Lansing State Journal, wrote an article for the paper detailing Erla’s career. In the article, Erla discusses how surprised he was by his velocity, and how it helped him achieve greatness this season. Below is an excerpt from the article.

“The first weekend, especially looking at velocity cards, I know one of our managers was saying how hard I was throwing. I was kind of shocked,” Erla said. “I wasn’t throwing that hard in my preseason (bullpen sessions) and whatnot, I was a couple of miles an hour slower. But to see how hard I was actually throwing and the success I had that first weekend really helped me continue the rest of the year.”

Erla’s awakening as a pitcher is similar to that of Bryce Jarvis, and Landon Knack‘s. These players all skipped summer ball and focused on gaining strength this past off-season. Due to that happening, all three significantly improved their draft stock. The key difference between the three is their history beyond their fastball. Jarvis has a plus change and Knack has plus control. Those were known elements of their game. Erla came into the season as more of an unknown. This feature is an example of the type of content that Pinstriped Prospects Dugout Members receive.  Dugout Members get complete access to scouting reports, interviews, and more all with limited advertisements on the website. Click here to sign up!

Below is a video of Erla pitching in 2020. The video was taken by D1baseball.com.

Due to the shortened season, not a lot of scouts got to see Erla’s transformation. This greatly affects his national rankings. Fangraphs didn’t rank him as a part of their top prospect list of 223 players. Baseball America ranked him as the 166th best prospect (subs, req) and MLB.com had him 92nd.

Erla will mostly be available for the Yankees in the third round. There might be some concern with his signability. At the end of the above-mentioned Lansing Journal article, Erla gave the following quote:

“The ultimate dream is to play professional baseball. That’s what my dream is, but it also depends on the situation I’m at,” Erla said. “I’m not just gonna go play pro ball to play pro ball. If it’s not right for me, it’s not right. Obviously that’s a possibility, but as of right now, I’m planning on coming back to Michigan State. But we’ll see what happens with that.”

It’s possible that he just meant that he’s going to continue working as if he’s going back to school, but it could also mean that he’s undecided. I feel like there’s a good chance that he will sign because while he’s technically a junior, he’s still older than most draft prospects. He will be about 23 years old at the time of the draft. If he doesn’t sign, that would mean entering next year’s draft as a 24-year-old.

If Erla does want to sign, I feel that he would be a very good third-round pick. His fastball is considered a very good swing-and-miss pitch. If he continues to improve his slider, he has a high floor as a solid relief prospect.