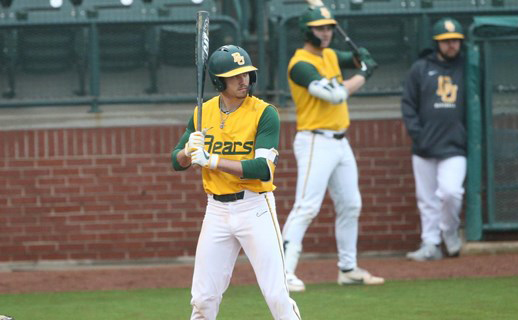 Prior to attending Baylor University, Nick Loftin was relatively unheralded of prospect from Texas. That is not to say he was completely unknown; he was ranked as the 500th best prep player by Perfect Game and named a part of MaxPreps Underclass All-American Team. But his modest success would not be enough to get him drafted in 2017.

After attending Baylor for three years, Loftin has transformed himself into a possible first-round pick, and he is arguably the best college shortstop in the draft. In a previous profile, I said the same thing about Casey Martin and that is because I feel they have a similar story. Both players went undrafted in 2017 and now they have both emerged as potential first-round picks.

While both of their stocks have risen in the past three years, it happened in vastly different ways, Loftin is not nearly as tooled up as Martin. He has achieved his success by being a very well-rounded player with no plus tools, but just one glaring weakness, which is his power tool.

Loftin started his college career as a left fielder, but moved to shortstop in the middle of his freshman year and has been a steady defender at the position. He has become a steady offensive player for Baylor and has improved offensively over the course of his career.

Following his sophomore season, he switched summer leagues and began playing in the Cape Cod League, but he only played 9 games before joining the USA Collegiate National team. In his short stint in the Cape, Loftin hit: .316/.316/.447. Loftin capped off his college career by playing 14 games and hitting: .298/.339/.554.

Additionally, he had an isolated slugging percentage of .264, which was easily the best of his career. It was the first time that he showed he could potentially have average power and this has certainly helped his stock and might be the reason he is drafted in the first round. However, it should be noted that his power surge may have come at the expense of his contact ability as his strikeout percentage rose significantly. As a sophomore, he went 13.8 at-bats between strikeouts, and this year he went 5.18 at-bats per strikeout.

Loftin is ranked as the 29th best prospect by Baseball America (subscription only), as the 36th best prospect by MLB.com, and the 23rd best by FanGraphs. There is no guarantee that he will fall to the Yankees, but if he does, he might be their pick based on their recent selection of high-floor shortstop prospects.

I personally would not love the pick mainly because of his low walk rate, but I do see the value in a player with his ability to avoid strikeouts. It is also possible that the Yankees believe in his power tool.

Even if the power does not come and his walk rate does not improve, Loftin can still be a decent hitter. It is rare, but guys like David Fletcher, Jean Segura, and Kevin Newman all had a decent-to-good season last year without getting on-base via walks and without hitting a lot of homers.