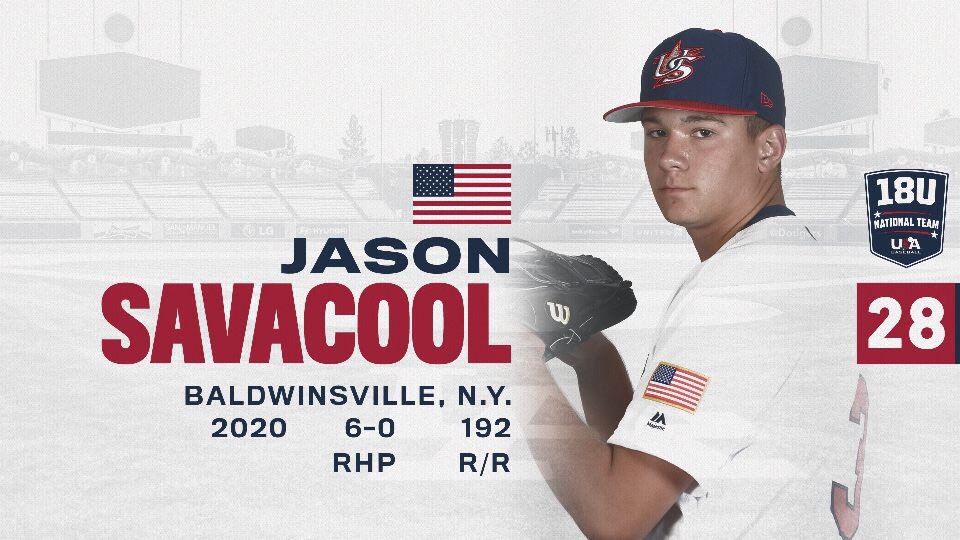 Savacool attends Charles W. Baker High School, a school that once helped develop former major-leaguer Jason Grilli and potential future major-leaguer Scott Blewett. The school has also had success in producing NHL players (Alex Touch & Tim Connolly) and a MLS goalie (Alex Bono). Savacool appears to be next in line as he considered to be the second-best prep pitcher in the Northeast. Savacool has had an impressive high school career. Over the course of three seasons,he’s put up an ERA of 1.41, and a K/9 of 14.6.

After his junior season, he pitched in several prospect showcases. He was chosen to pitch in the MLB Prospect Development Pipeline League (PDP). The PDP is a three-week league, which features the top 80 draft prospects for the 2020 draft. The league is held at the IMG Academy in Bradenton, Florida and is held from mid-June to early July. While performing in the league, he had the opportunity to meet Yankee legends Derek Jeter and Andy Pettitte as well other former major leaguers. In an article with Victor Barbosa from Syracuse.com, Savacool spoke about talking to Pettitte every day as was one of his biggest highlights from the PDP.

At the conclusion of the league, 40 top prospects were chosen to play in inaugural High School All-Star Game. This game was televised on MLB Network during All-Star weekend. Savacool pitched one scoreless inning during game.

After the PDP, Savacool would go on to pitch in East Coast Pro Showcase, Area Code Games and the 2019 Baseball World Cup under-18 tournament. Baseball America scouted his performance at these showcases/tournaments and came away impressed.

BA placed him on their list of standout prospects from the Area Code Games. After watching him in the World Cup, they noted that he was a very studious pitcher who went as far as keeping a notebook with to keep track of his opponent’s tendencies. This feature is an example of the type of content that Pinstriped Prospects Dugout Members receive.  Dugout Members get complete access to scouting reports, interviews, and more all with limited advertisements on the website. Click here to sign up!

Savacool is ranked as the 114th best prospect by BA (subscription only), 157th by MLB.com, and 156th best by FanGraphs. Savacool had the potential to really raise his draft stock if he had a good season. Unfortunately, due to the Coronavirus pandemic, teams weren’t able to see if he could repeat the strong performances that he had over the summer.

At this point,it seems like the Yankees would be able to draft Savacool in the third or even fourth round of the draft, but it really depends on if he actually wants to sign. The Yankees have one of the smallest draft pools for the 2020 MLB Draft. Depending on who they take in the first round, they might not have a whole lot of room left for prep prospects.

It’s not known how hard it would be to break his commitment to Maryland. Recently, the Yankees seem to have begun shying away from prep pitchers, but I feel that Savacool is advanced enough for them to possibly take a risk after the first round if he is signable.