The 2020 Pinstriped Prospect Madness Tournament has reached the semifinals and we have two great matchups set up for you to vote on over the next week. Starting on Friday, you will be able to vote for the first of the two semifinal matchups over on Twitter (@PinstripedPros). Each matchup will be up for two days and the championship match will take place over 3 days beginning on Wednesday.

Before we get to the semifinals, let’s take a look back at how the quarterfinals went down in each of the four regions. Remember, the Cashman Region winner will face the Oppenheimer Region while the Afterman Region winner faces the Rodman Region. 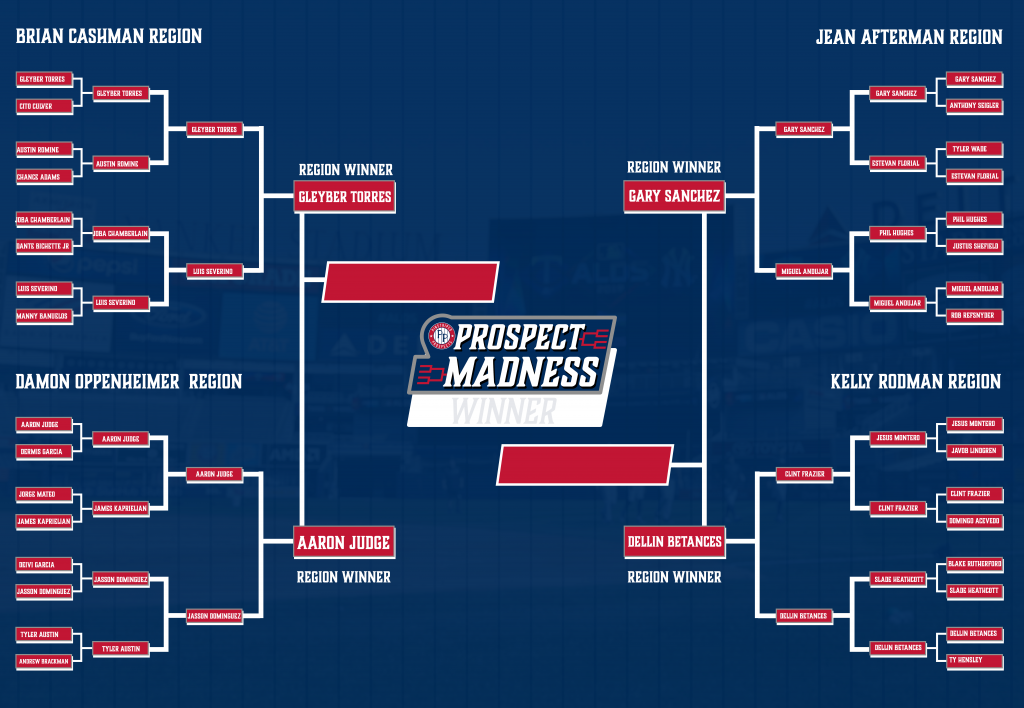 In the Cashman Region, it was a battle of the top two seeds as (1) Gleyber Torres faces (2) Luis Severino. In what was somewhat of a surprise, Torres dominated this matchup as he took 86 percent of the votes in the victory:

We have reached the Elite 8 in #Yankees Prospect Madness. Today and tomorrow, you can vote on the Cashman Regional Final and it is a good one between Gleyber Torres and Luis Severino. #prospectmadness

The Cinderella run for (6) Jasson Dominguez came to an end as the top seed, Aaron Judge, ended up taking the victory to advance to the semifinals with 77 percent of the vote:

Today, we have the Oppenheimer Regional Final where Jasson Dominguez tries to continues his upset run against Aaron Judge #Yankees #ProspectMadness

The first of two semifinal matchup could be a championship matchup in both year as Gleyber Torres takes on Aaron Judge. It’s the battle of a player who was once one of the top prospects in baseball against a former 1st Round pick that has been viewed as the possible next captain of the Yankees.

In the battle of two homegrown Yankees, the top two seeds in this region faced off in the regional final. By a resounding margin, (1) Gary Sanchez took the win over (2) Miguel Andujar with 82 percent of the vote to get to the semifinals.

This matchup ended up being closer than a lot of people thought it would be. (4) Clint Frazier gave (2) Dellin Betances a run for his money, but Betances ended up getting the win by a 56-44 margin of victory.

Today we begin the final quarterfinal matchup of #Yankees #ProspectMadness. In the Rodman Regional final, it is Clint Frazier vs. Dellin Betances

It will be Gary Sanchez against Dellin Betances in the second semifinal. Sanchez had 104 home runs in the Yankees farm system and was one of the club’s best prospects at a young age. As for Betances, most of his minor league outings were as a starter, but the shutdown reliever had 732 strikeouts while playing in the minors.

It is up to you to determine who makes the championship. May the best prospects win.