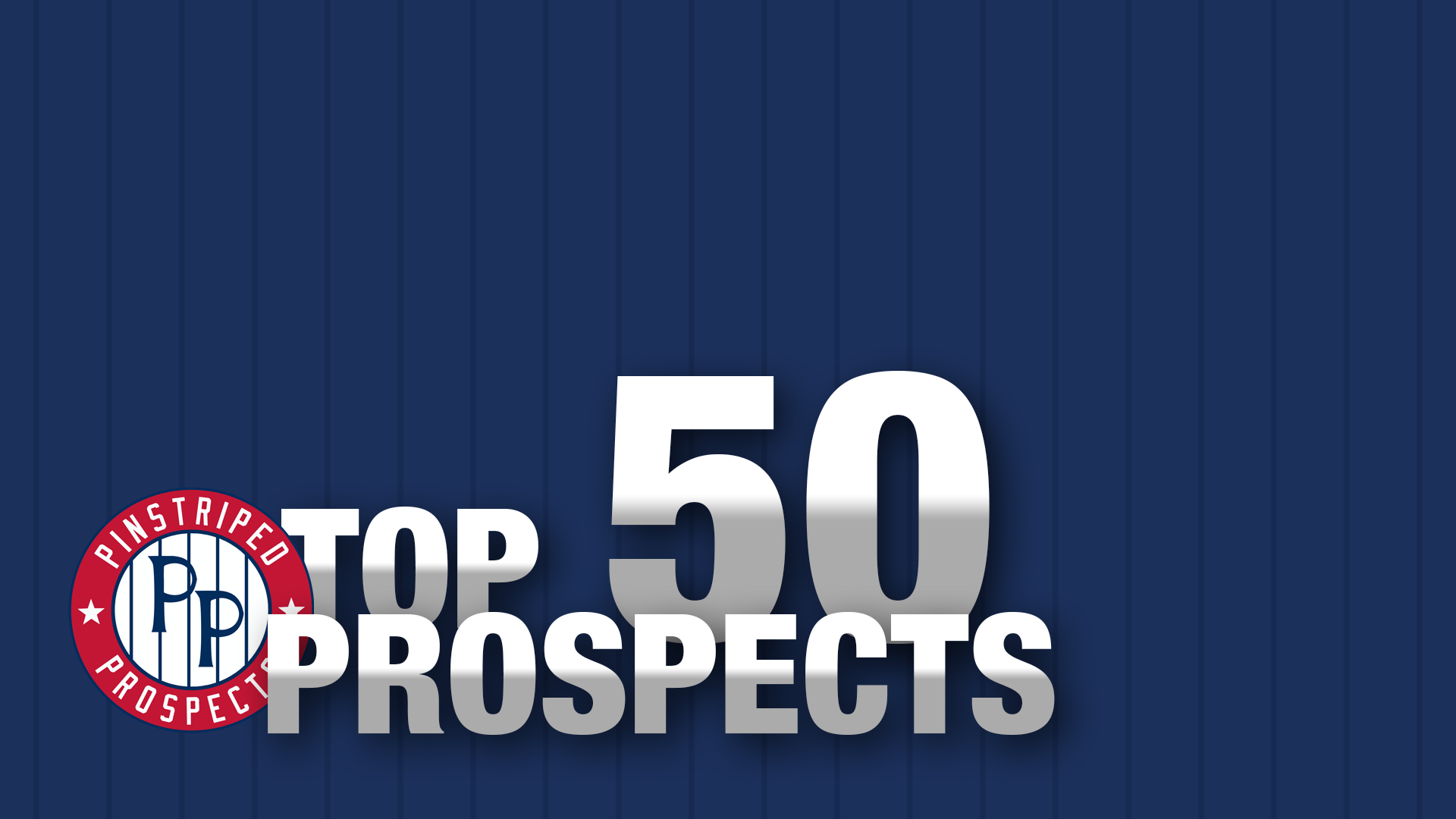 The Yankees come into the 2020 season with some buzz around the farm system, thanks to the addition of outfielder Jasson Dominguez as their top international signee in 2019.  Dominguez joins a system that already had a lot of great lower-level talent to compliment the pipeline of young talented pitchers.

Dominguez joins Deivi Garcia at the top of the Yankees top prospects list with many arms following behind them.  This list is the result of months of work comparing and contrasting prospects and the development of a mathematical formula to help guide the rankings.

The formula takes into account a player’s proximity to the major leagues, the age for their level, ceiling, floor, and risk. Each part is assigned a number and based on the player’s rank value they are assigned an estimated position in the top prospect rankings.  The list began with 120 players in total to be narrowed down to the top 50.

After the system formulates the player’s rank value we take that list and come up with our official rankings.  The rankings then are reviewed by scouts and industry professionals to get their input before being finalized.

Non-Pinstriped Prospects Dugout Members receive free access to capsules for Top Prospects 1-10, and the list of names for #11-30.  Dugout Members receive the complete list plus capsules for all 50 members of the top 50 prospects in the organization as ranked by our experts as well as the names for all 100 of our Yankees top prospects. Members get complete access to scouting reports, interview and more. Click here to sign up!

Bucking the trend in the prospect industry, we are ranking right-handed pitcher Deivi Garcia as the number one prospect in the organization, narrowing beating out uber-prospect Jasson Dominguez and fellow right-hander Clarke Schmidt.  Garcia’s mix of stuff, projectability, risk, proximity to the big leagues, and age all was a formula that easily ranked him above anyone else in the system by a wide margin.

Garcia’s bread and butter pitch is his mid-90s high-spin rate fastball that tops out at 97-98 miles per hour right now.  He compliments that with a plus curveball, an average changeup, and a developing slider that has the potential to be a plus pitch.  Combine his stuff with the maturity and pose he shown on the mound and it is a recipe for a quality major league starting pitcher.  While he may not have the same ceiling as a guy like Clarke Schmidt, there is less risk of him hitting his floor and ending up as a solid number three starter on the Yankees in the near future.

The Yankees’ top signee in the 2019 international free agent class was switch-hitting outfielder Jasson Dominguez.  While he has yet to play in an official game, he has shown off some incredible things in the Tricky League and Instructional League, including towering home runs.  Many believe he is the best international signee by the Yankees ever and raves about his tools.

The youngster comes into 2020 with a lot of high expectations on him with the mythical status those in the industry and fans have given him.  Time will tell if he will be able to live up to the comparisons to Mickey Mantle and Mike Trout.  Expect him to start off against some advanced pitchers in Pulaski or Staten Island.

The Yankees were confident enough to make Schmidt their 16th overall selection in 2017 despite undergoing Tommy John surgery a month prior to the draft. This has paid dividends as the righty made huge strides in 2019. After making his pro debut and pitching sparingly during 2018, there were a lot of questions surrounding Schmidt and how he would handle a full season. Schmidt exceeded expectations in 2019.

Beginning the season in Tampa (Advanced-A) and ending the year in AA after a late-season promotion, Schmidt pitched to the tune of a 3.47 ERA across 90 2/3 innings while striking out 102. Schmidt’s repertoire features three potential plus pitches. His fastball operates at 92-95, topping out at 96 with heavy run and sink. It is thanks to this pitch that contributed to a 53.6% ground ball rate. He also features a curveball and changeup that often showed as plus secondaries. Schmidt’s curveball sits in the low-80’s with a late, nasty 11-5 break. The pitch’s spin rate topped out at 3,100 RPM (MLB average is in the 2,500 RPM range for curveballs).

Schmidt utilizes his changeup as a putaway pitch just as well as his curve at times. When right, the pitch tumbles out of the zone with significant horizontal and vertical movement. Although questions do still remain regarding his durability, Schmidt maintained his velocity and stuff with a strong finish to the year, suggesting he may be ready for a heavier workload in 2020.

The Yankees acquired Luis Gil in 2018 from the Minnesota Twins in exchange for outfielder Jake Cave.  Gil is another Yankees prospect that can easily hit triple-digits with his fastball. His fastball is primarily in the mid-90s and has topped out at 101 mph at times. In one start in Staten Island, the spin rate on his fastball hit 2,700 RPM.

His primarily secondary pitch is his curveball that sits in the low-80s and has a spin rate that at times is over 3,100 RPM and is routinely over 2,700 RPM. His third pitch is a changeup that currently is clocked at around 88 miles per hour but it is still early in its development.

The Yankees liked what they have seen from the 21-year-old and added him to the 40-man roster after the season he pitched 96 innings over 20 starts between the Charleston RiverDogs and Tampa Tarpons.  In total, he was 5-5 with a 2.72 ERA Awith 123 strikeouts.

Outfielder Estevan Florial has fallen off many prospect lists because of the injuries over the last couple of years have piled up, costing him almost a full season in development time.  Unfortunately, for Florial both injuries were to his wrists which zapped some of his ability at the plate.  Despite the injuries the tools that made him a prospect are still there, meaning a healthy season from him will see him rocket back up many lists.

In addition to his physical tools, Florial has the mental makeup to turn heads.  He is a hard worker that routinely shows up early, or stays late to work on what he needs to do.  He also has shown poise, humility, and other aspects behind his years.  Add to that, he is also fluent in English, often acting as a translator for his fellow teammates.

Florial is a true five-tool player with plus bat speed, plus power, plus speed, plus arm, plus defense.  At 22-years-old in 2020, Florial is going to be age-appropriate for High-A but can likely be pushed to Double-A.  Florial had a cup of coffee in Double-A in 2017 but has not reached that level since due to the injuries.

Gomez was signed by the Yankees as an international free agent in 2016 and has cemented himself as one of the Yankees top pitching prospects heading into the 2020 season.  He reached as high as Class-A Charleston in 2019 and features three pitches.  His main pitch is his fastball that has touched as high as 97-98 miles per hour with sink.  His secondary pitches include a curveball that he throws in the high 70s and low 80s as well as a developing changeup.

Gomez is a young, projectable right-handed pitcher that has yet to grow into his body and has plenty of time to do so.  He will be 20 years old in 2020 and will likely return to Charleston.  While the results have not been there in the traditional sense, the stuff is there for a future start pitcher.

Let’s just start out by noting that Medina may have one of the highest ceilings among pitchers in all the Minor Leagues. Armed with an electric heater that regularly reaches triple digits, a knee-buckling curveball that flashes double-plus, and a changeup that has potential to be at least above-average, Medina’s stuff is something out a video game. Unfortunately, these pitches that enamor scouts when everything’s clicking are often wasted due to a repeated theme of lack of control and command. Medina’s walk rate in 2019 was 6.2 BB/9.

The flamethrower does not lack the athleticism or have any major mechanical issues but will need to sharpen his mental game in order to harness the frontline stuff he possesses. On the bright side, Medina did show a brief improvement in the second half in terms of both strike-throwing and results. From July 11 on, Medina pitched to a 1.77 ERA and 3.0 BB/9. Medina will look to build off this late-season success heading into 2020.

The big question for Medina will be if he can continue what he did in the final stretch of the season.  If so, he will be rocketing up prospect lists.

Initially signed by the Yankees as an international free agent in 2016, Contreras, as risen up many prospects, ranks after two good seasons in the low minors. His fastball sits in the low 90s usually 92-94 miles per hour and has reached as high as 98 at times.  He compliments it with a changeup and curveball.

The Yankees signed Yajure in 2015 as an international free agent.  The right-hander reached as high as Double-A in 2019 and was added to the Yankees after having a breakout season.  Yajure features a fastball that sits in the 92-95 miles per hour, topping out at 98 occasionally.  He also features a curveball, cutter, and changeup.

While with the Trenton Thunder, Yajure allowed just one run over two games, 11 innings with 11 strikeouts and just two walks. He made just one appearance in the postseason for Trenton, allowing three earned runs over four innings of work, striking out six batters and walking three.

Kevin Alcantara was one of the Yankees top signees from the 2018 international free agent class.  The young, 17-year-old out of the Dominican Republic owns many impressive tools.  The potential is there for him to become a future five-tool player as he moves up through the system.

At 6-foot 6-inches tall and 188 pounds, Alcantara is very thing and has plenty of time to grow into his body.  His possession of above-average running ability and defense in center field. He projects to remain in center as he moves through the farm system with plenty of evaluators comparing him to a young Dustin Fowler.

At the plate, he has shown off some incredible bat speed and some raw power.  As he matures, the power will become more pronounced in-game action but the ball already flies off of his bat well.  Like many young prospects, he needs to develop better pitch recognition at the plate but that will come as he gets more reps.