This week, we continue our Pinstriped Prospect Madness heads into the Elite 8 with each region playing its respective final. With it being the last 8, we are going to extend the vote to 2 days per matchup to get the most votes. You can head to our Twitter account (@PinstripedPros) to cast your vote.

When you vote, we want to hear from you as to why you made your decision on each matchup. Remember there is no criteria for this tournament in terms of who you should select. Responses could be read on next week’s Pinstriped Prospects Podcast (Episode 10). We will rundown how th the voting went for each second round matchup and you can see the whole bracket below 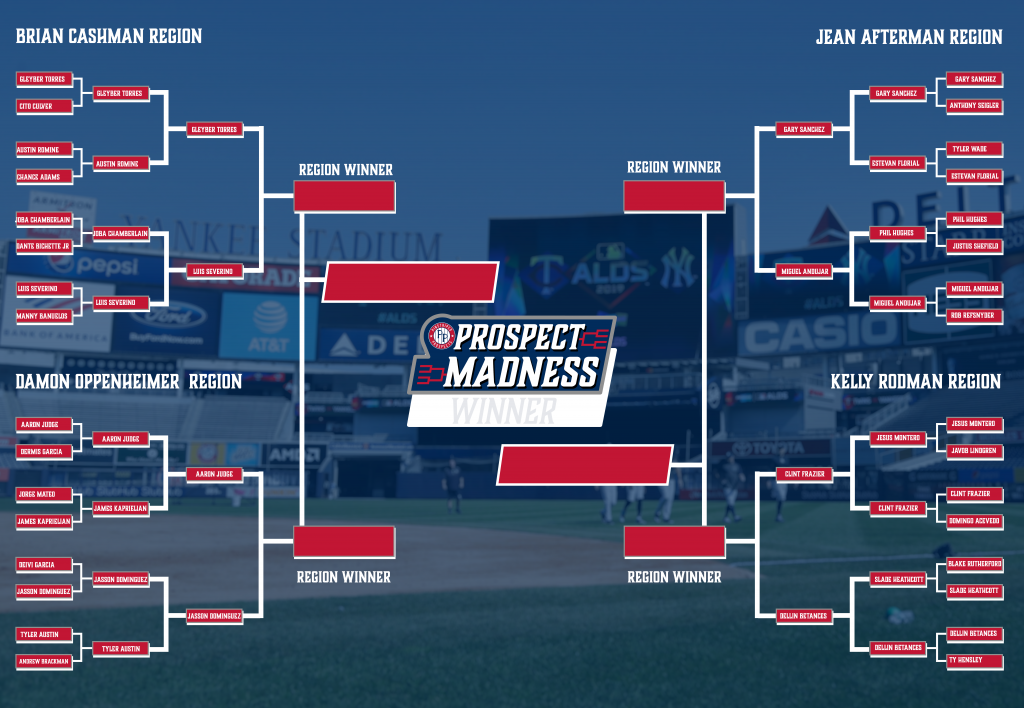 The Cashman Region saw both top seeds advance to the regional final and pretty comfortably. Gleyber Torres dominated in his matchup against Austin Romine while Luis Severino defeated Joba Chamberlain in convincing fashion.

In our second matchup, it is a battle of pitchers past and present as Luis Severino faces Joba Chamberlain

This sets up a great Cashman Regional Final between Torres and Severino. With this matchup, do you take the player who has been one of the top prospects in baseball at one point or the player that was a strong prospect and is a homegrown Yankee? This vote should be the most interesting out of the 4 matchups.

The Oppenheimer Region’s storyline continues to be the cinderella run for Jasson Dominguez. The 6 seed pulled off another upset as he defeated the 2 seed, Tyler Austin. Meanwhile, the top seed, Aaron Judge advanced comfortably over James Kaprielian.

The second matchup is the 2 seed Tyler Austin against the popular 6 seed, Jasson Dominguez

Can Dominguez continue his run into the Final Four or will Judge continue his dominance of this region? It’s the maybe future captain of the Yankees against potentially, the next Yankee phenom.

In this region, the top 2 seeds each were able to advance with ease into the Regional Final. Gary Sanchez cruised in his matchup against Estevan Florial while Miguel Andujar beat a former Yankee prospect of the past in Phil Hughes.

The 2nd matchup is a battle between the 2 seed, Miguel Andujar, and the 3 seed, Phil Hughes

In this matchup, you have two current Yankees going up against each other. Both have had their issues defensively and they have shined at the plate.

The first 1 seed of the tournament went home as Jesus Montero was upset in blowout fashion by the 4 seed, Clint Frazier. Frazier moves on to take on the 2 seed, Dellin Betances. Betances received over 90 percent of the vote in a win over Slade Heathcott.

The other matchup is a pitcher vs. hitter game as the 2 seed Dellin Betances faces 6 seed Slade Heathcott

Right now, Betances looks like he has a clear path to the final in this tournament, but don’t discount Frazier and his chances as some might say his potential has yet to be unlocked.