A Road Game at Home was Quite Surreal 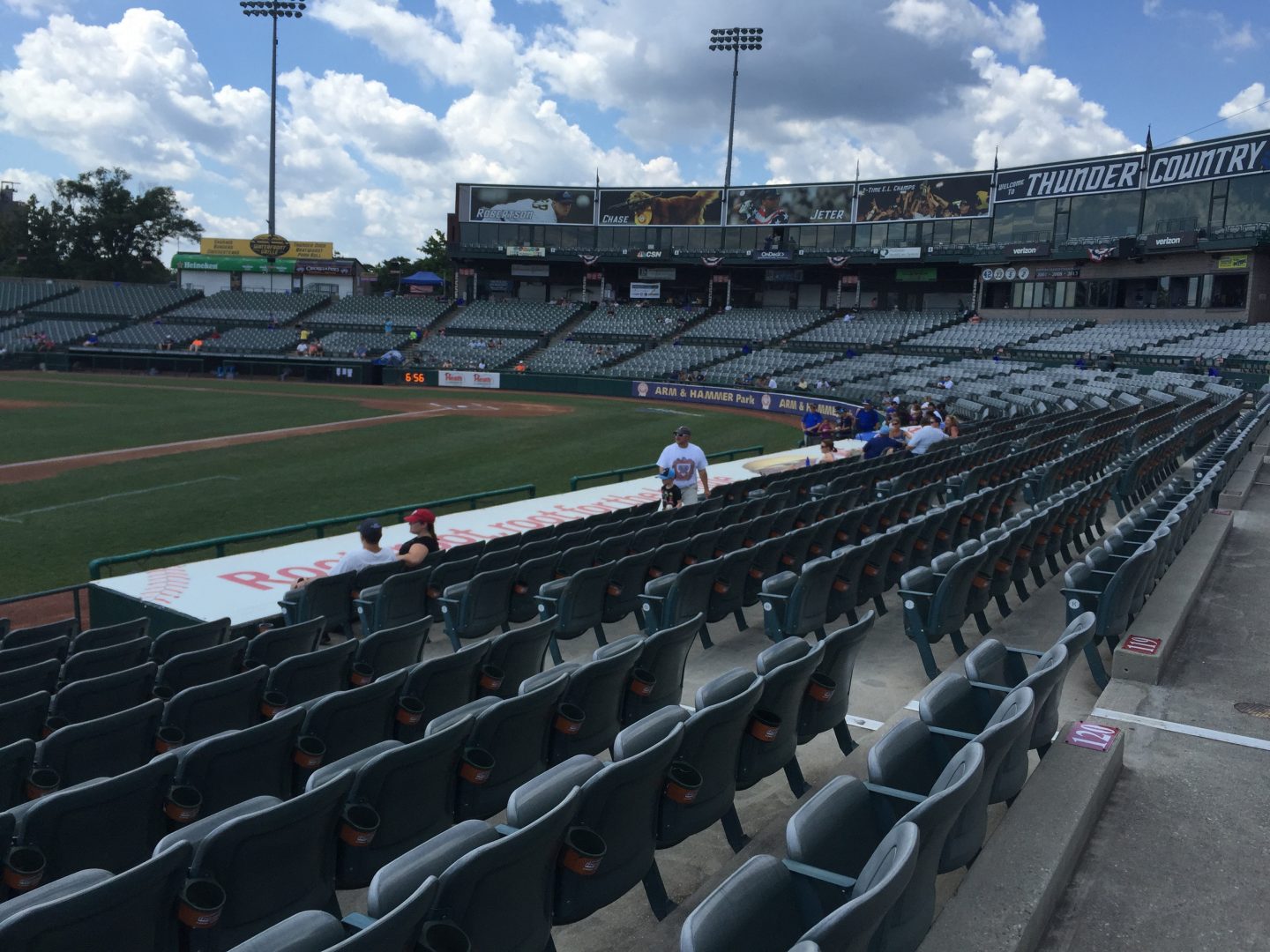 TRENTON, NJ – We knew this was not a Trenton Thunder home game the second we pulled into our usual parking lot at ARM&HAMMER Park Saturday afternoon.

Our friend, the usual parking attendant, was nowhere to be seen. Want to park? Just pull in, find a space and do it for free.

That was just the start. Walking into the ballpark 10 minutes before the first pitch, there were few fans in the stands. The announced paid attendance for the game with the Hartford Yard Goats, whose stadium, Dunkin Donuts Park, is scheduled to open at the start if the 2017 season after numerous delays, was 598.

The Yard Goats (70-54), who trail the 77-49 Thunder by six games with 16 to go for the Eastern League East wild-card playoff spot, have done a remarkable job given they are playing all 142 2016 games on the road. The Thunder were originally supposed to visit Hartford this weekend.

On a given Saturday, the Thunder average about 7,000 fans. This, however was no given Saturday. Not even close. Only one concession stand was open, only serving a limited menu. The right-field grille, so popular with Chickie & Pete’s, was shuttered and not serving those famous Crab Fries.

“We are being a good Eastern League neighbor, trying to help the Yard Goats,” said Thunder Vice President of Ticket Sales John Fierko.

The Thunder had more than enough staff to run the ballpark without a hitch, but many were missing. They had plans for what was supposed to be a weekend off between homestands. Even the club’s heralded mascot, Boomer, was absent. It really seemed surreal with no Boomer race with a young fan.

None of the Thunder’s usual in-game promotions, including the famous “Dizzy Bat Race,” a staple since 1994, and the “Dirtiest Car in the Lot,” were on the agenda. It made one appreciate just what type of in-game atmosphere the Thunder have built since 1994. That was noticeably absent Saturday.

Our National Anthem was not sung live, as is custom at every game.. There was no announced “Seventh Inning Stretch,” though “Take Me Out to the Ball Game.” was played before the bottom of the seventh with the Yard Goats coming to bat.

The only thing that was familiar was what took place on the field, where the Yard Goats notched a 3-1 win to square the three-game series that concludes Sunday. Even that was somewhat off-kilter as well.

The Thunder, as the visiting team in their own ballpark, wore their road grey. They batted first, took batting practice last, but  did stay in their own clubhouse and operate out of the home, first-base dugout. We sat in our usual press box seat and Thunder radio voice Adam Giardino called the game from the home radio booth.

Despite tickets bring priced at $5 on a general-admission basis, the ballpark was virtually empty.

“You just have to get yourself ready to play. The only thing for me today is we got the batting cages second. I would have liked to have spent a bit more time working there.

“It is nice, however, to be able to stay in the area around familiar surroundings.”

We haven’t seen the Thunder play before so few people since April 1994, when the club hosted the Canton-Akron Indians (now the Akron Rubber Ducks) for a three-game series in the now-demolished Veterans Stadium in Philadelphia. The attendance for those three encounters averaged about 350.

The Thunder also played “home games” at Reading and Wilmington that first season, with then-Waterfront Park opening May 9 in 1994. We can understand what the Yard Goats are going through to much more serious degree. Perhaps all the time they have spent on the road have helped them bond.

Normalcy will return Monday evening, when the Bowie BaySox arrive to open a three-game series. The site of Boomer will be one for sore eyes.