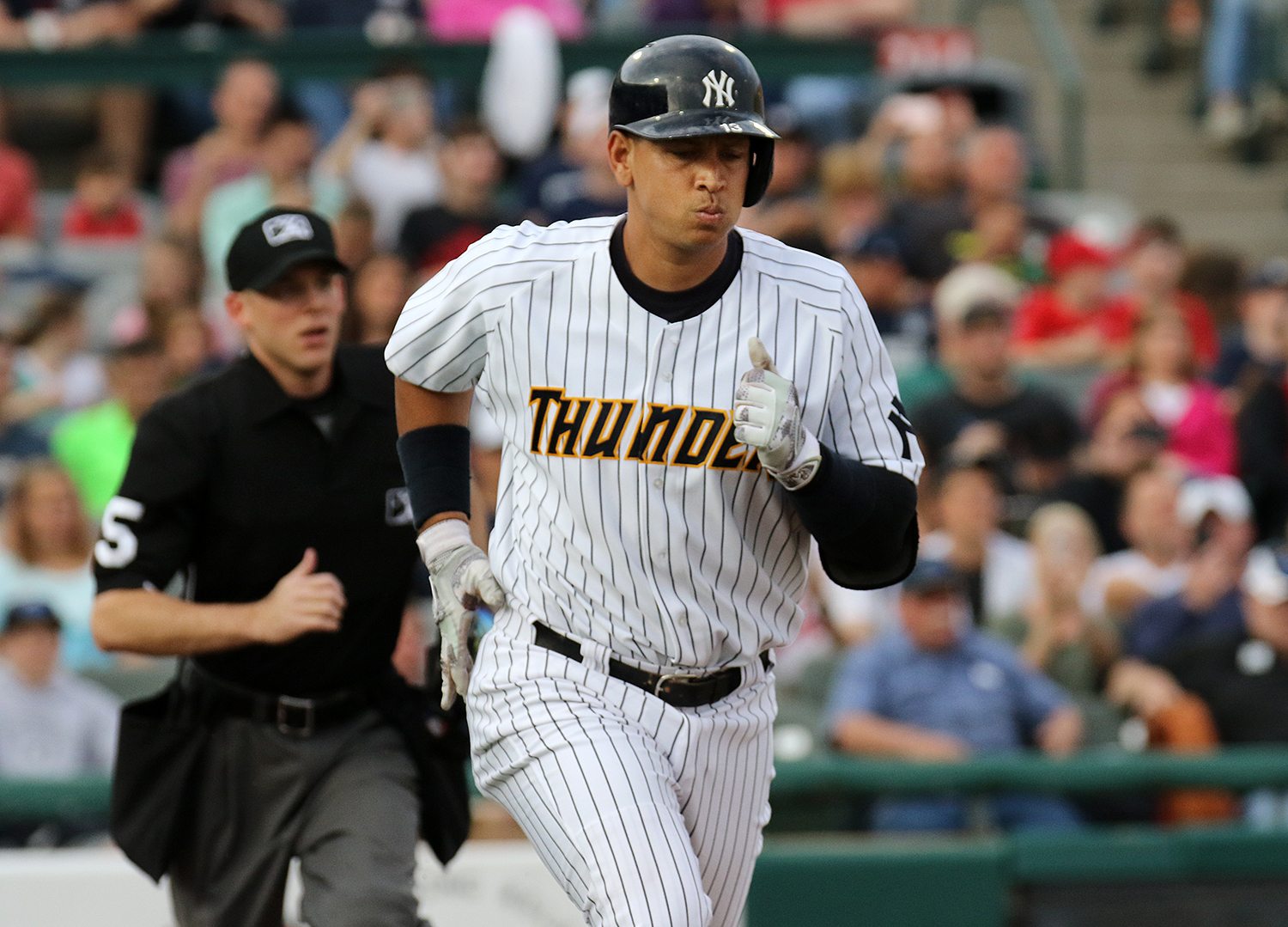 Ales Rodriguez runs to first after popping up to second in the first inning Tuesday. (Photo by Martin Griff)

Following the game, Rodriguez confirmed he would be playing in Trenton Wednesday as well. He has been out since May 4 with a hamstring injury. This is his second rehab appearance with Trenton, having done so previously in 2013.

“Tomorrow is another day, another step,” he told reporters. “I’m playing here tomorrow (Wednesday). That is the plan right now.”  The Yankees want him to get some at-bats before he is reactivated, likely later in the week.

Rodriguez popped out in his first at-bat, but stepped to the plate with runners on first and third base in the third inning. The 40-year-old DH lined a single back through the middle to give the Thunder a 1-0 lead.

That 1-0 lead held for the Thunder into the seventh inning when the Fisher Cats broke through with a pair of doubles from Rowdy Tellez and Dwight Smith Jr. tied the game.

The Thunder offense rallied back in the bottom half of that inning and put two on with one out. Rodriguez stepped to the plate for his final at-bat of the night and singled to left, loading the bases. Tyler Austin worked a bases loaded walk after that to take a 2-1 lead for the Thunder.

In the ninth, New Hampshire saw each of its first three men reach base against Tyler Jones. The tying run came across on Smith Jr’s RBI single with nobody out. The Thunder had a chance in the bottom of the ninth when Silva, pinch-hitting for Rodriguez, wasn’t able to bring home the winning run and neither was Austin.

Cito Culver, who scored all three runs for the Thunder in the game, led off the eleventh inning with a single and got to third with two men out. Silva stepped to the plate and lined a 1-0 pitch into right-center for Trenton’s second walk-off win of the season.

LHP Daniel Camarena threw six shutout innings for the Thunder on Tuesday night, however, he took a no-decision thanks to the late-game lead changes. Camarena allowed three hits, two walks and struck out seven.

Another lefty, Dietrich Enns, back from Triple-A Scranton/Wilkes-Barre, will start for the Thunder at 7 p.m. Wednesday. RHP Casey Lawrence will counter on the mound for New Hampshire.