A Splitting Headache: Tanaka’s Putaway Pitch Is In the Tank 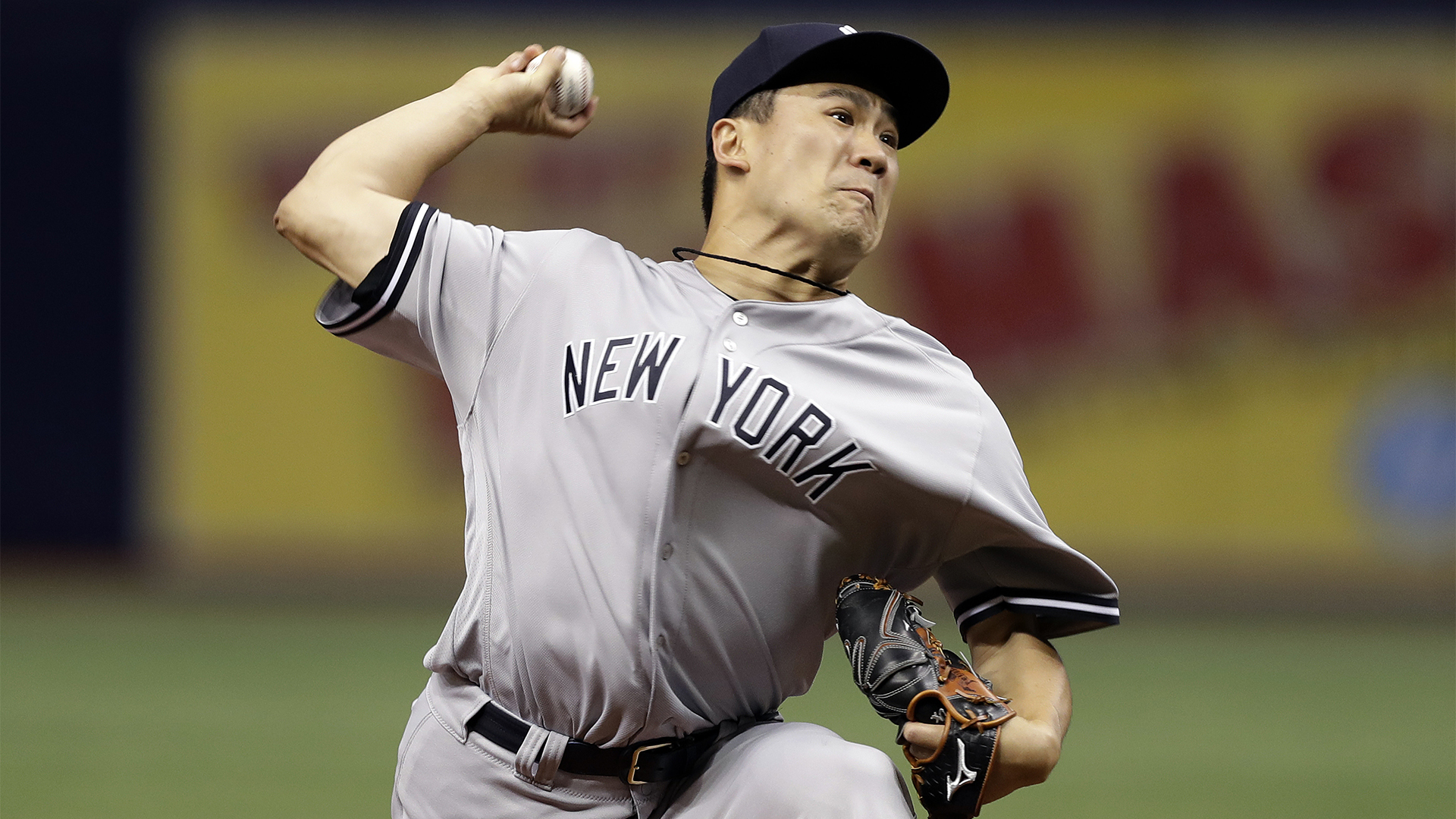 Before we dive into the metrics this week, here’s a room-temperature, highly unscientific take that has bubbled up on Yankees Twitter once every five days for the last five years: Masahiro Tanaka gives up a lot of home runs. Over the course of any given start, the right-hander is bound to hang a slider or a splitter belt-high that ends up in the seats. One can only hope there’s nobody on base when it happens, absorb the blow, and move on. Among the exactly 100 pitchers who threw at least 500 innings between 2014 and last year, Tanaka ranks an ignominious second only to Josh Tomlin in home runs as a percentage of fly balls. 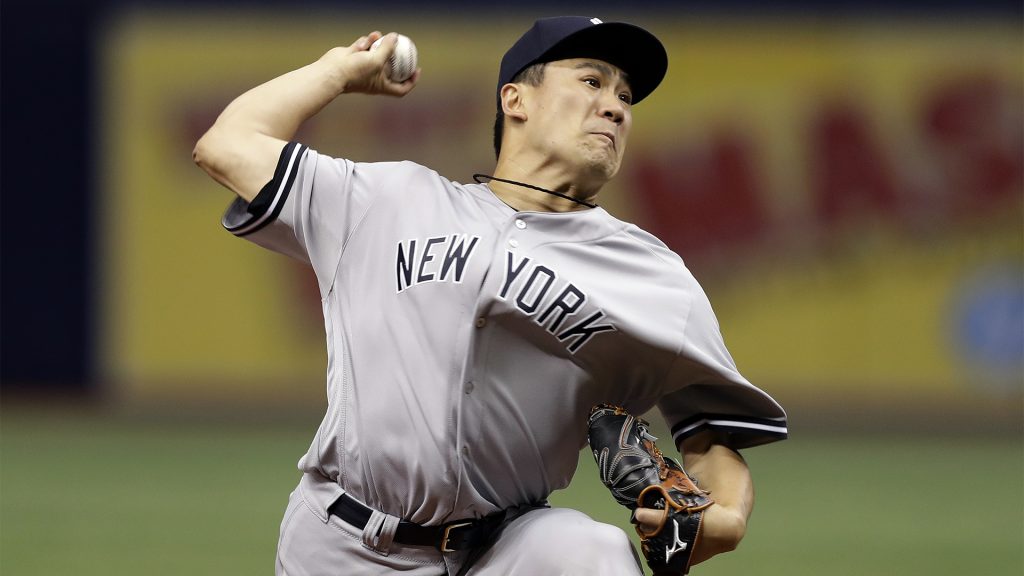 Nonetheless, the fans put up with it because Tanaka has also been one of the league’s best pitchers over that timespan. He ranked in the top 25 on that same list in both ERA- and FIP-. He posted a strikeout-to-walk ratio of roughly 19 percent, on par with Justin Verlander’s. He landed first in chase rate by more than a percentage point, seventh in swinging-strike rate, and tenth in overall contact rate. (Tomlin, by contrast, is tenth from the bottom in that last metric.) These figures paint a very telling picture: Tanaka is an above-average pitcher who shines the brightest when he avoids contact altogether. Statcast information further proves this point: in three out of four seasons for which data is available, Tanaka posted a hard-hit percentage south of the 30th percentile, but a strikeout percentage north of the 65th. The abundance of whiffs and acute paucity of walks more than makeup for the dingers – and one pitch in his unusually diverse repertoire is a big reason why.

Tanaka’s splitter has been arguably the most effective weapon in his arsenal for the entirety of his solid career. It’s perhaps the biggest factor in his ability to maintain such impressive chase rates over the years. The numbers themselves are ludicrous: in all five of Tanaka’s full seasons with the Yankees, hitters have chased over half of his splitters thrown outside the zone. He has also used the pitch to put away a hitter over 20 percent of the time in every season thus far. His hapless competition has posted batting averages of .174, .205, .167, .225, and .210 against the pitch. It’s a devastating offering, with late downward tilt that consistently overwhelms some of the best hitters in the game.

The tables have completely turned over Tanaka’s first six starts this season. The chase rate against his splitter has dropped below 50 percent. Even when hitters do chase the pitch, they’re able to make contact more frequently than ever before – that percentage has jumped above 70. Overall contact sits at a pedestrian 84.6 percent after never rising above 72 in any season prior, and Tanaka is suddenly throwing what should almost always be a chase pitch inside the strike zone 40 percent of the time. Most disturbingly, the splitter’s whiff rate has fallen off a cliff. Check out this chart that compares whiff rate against each Tanaka offering over the years. 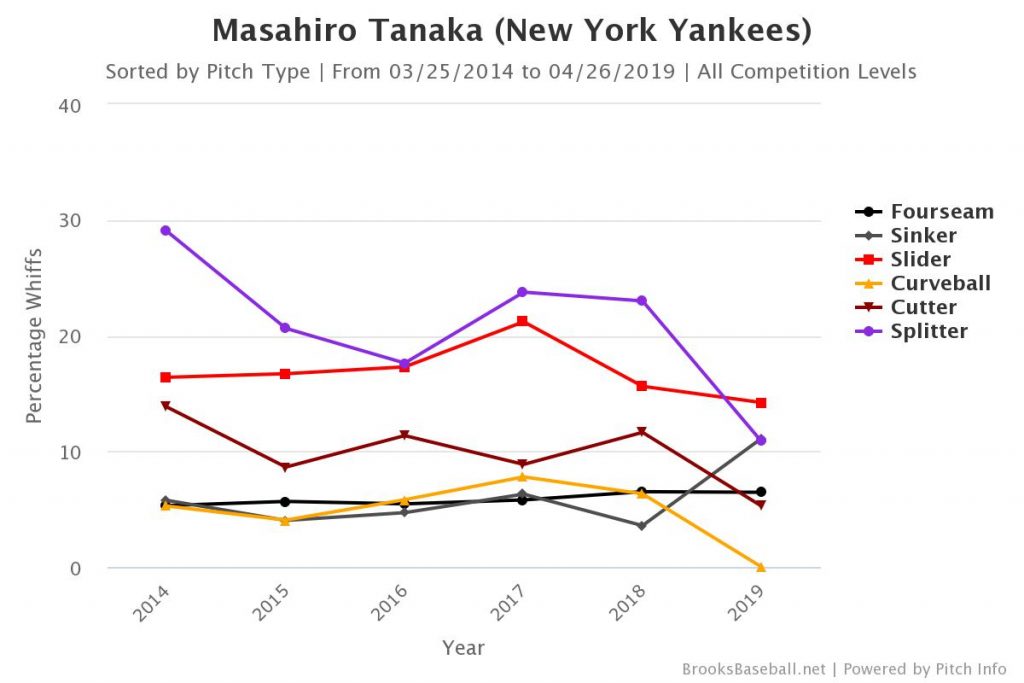 Good grief. Track that purple line – the splitter has descended from Tanaka’s most consistently effective offering to a contact-generating nightmare. The result has been all too predictable: opposing hitters are batting .375 and slugging .516 against the splitter this season, and the percentage of fly balls clearing the wall sits at an astronomical 50. As analysts and savvy fans have always known, Tanaka’s ability to miss bats dictates his success. His most important pitch has simply not been able to do that in the early stages of 2019.

This isn’t to say that Tanaka has been horrible this season. His ERA- and FIP- for the year are both above average at 79 and 90 respectively. His hard contact rate hasn’t spiked hugely, his expected stats per Baseball Savant remain above the 50th percentile, and the 50 percent HR/FB rate on splitters is bound to regress. But there isn’t all that much here that can be written off as small-sample-size noise. Hitters are picking up Tanaka’s splitter out of his hand, chasing it less, and squaring up more of the mistakes that seem to be more frequent. Those trends aren’t the type that smooth themselves out as more innings are thrown. It is, however, early enough in the season that Tanaka could make the necessary adjustments inhis sequencing and location and right the ship with his splitter. Especially with Luis Severino out until midseason, an effective Tanaka is an absolute requirement for the Yankees to hang in the division race. The last thing Yankee fans want is to slog through a season in which #TanakaDinger trends on Twitter every five days.