A Uniformed History of the Staten Island Yankees

From the days of flannel jerseys to today’s technologically advanced moisture controlled materials, nothing showed off the amount of team pride you had than donning the team’s uniform. These days there are no shortage of jerseys you can wear, from game-worn/team issued jerseys to replicas. Since the Staten Island Yankees’ first season in 1999 there have been many versions of the team’s uniforms and with this being their 15th season in Staten Island let’s take a look at the uniformed history of the team.

In 1999 the Watertown Indians signed a Player Development Contract with the New York Yankees and agreed to move the team from the quaint upstate-New York town to the New York City borough of Staten Island. This was of course the same deal that paved the way for the Brooklyn Cyclones a couple of year later and also meant the Yankees long-time relationship with the Oneonta ball club had come to an end. 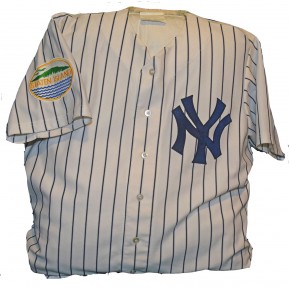 With the move and setting up shop in a new city there wasn’t much time to prepare, a logo was quickly drawn up and sent in to New Era to create the team’s official cap. This logo has stood the test of time and has remained the Staten Island Yankees primary logo for all 15 years and was even modified in 2007 to be used as the logo for the short-lived Scranton/Wilkes-Barre Yankees.

With the rush there was not much time to design a set of uniforms for the team so to make things easier the SI Yanks inherited the old uniforms from the Oneonta Yankees. Only one minor change was made to the jerseys, the addition of a patch on the right sleeve which was the seal of Staten Island. On the road the team wore the standard grey New York Yankees jersey, grey body, alternating blue/white trimming on the sleeves with New York written in block font on the chest in blue/white twill. Both of these uniforms were made by Wilson. For batting practice the team sported the same blue mesh jerseys they did in the majors made by Majestic Athletic, who of course now supplies every MLB team. After the inaugural season the home jerseys were sold to fans while the road and batting practice jerseys were sent to Tampa.

With a full off-season to prepare and their first year under their belt the Staten Island Yankees unveiled new uniforms for their 2000 season. It was a season that saw future MLB players Chien-Ming Wang, Wily Mo Pena, and the first ex-Staten Island Yankee to make the New York Yankees: Jason Anderson. In keeping with tradition the Baby Bombers once again donned pinstripes, this time substituting the Yankees script with the words “Staten Island” written on the tail for the famous interlocking “NY” logo. The left sleeve features the Staten Island Yankees primary logo and on some jerseys it had the Wilson logo as they once again manufactured the team’s home and road uniforms.

On the road the Yankees sported the traditional road grays with the alternating blue/white/blue sleeve trimming with the Yankees script with the words “Staten Island” written on the tail in blue and white twill and the logo patch on the left sleeve. The new uniform changes also extended to their batting practice jerseys which now began to be used as an on-field alternate jersey as well. The new batting practice jersey was a two-button pullover blue mesh jersey that featured the same script logo as the home/road jerseys in white twill and alternating blue/white/blue sleeve trimming.

These uniforms would only receive minor changes in the next couple of years. In 2001 the Minor League Baseball 100th Anniversary patch was added to the right sleeve and in 2002 the American Flag patch was placed on the back above the numbers. A special variation of the home jersey was used in the game on August 16, 2001. In a promotion that was sponsored by eBay’s Half.com the Staten Island Yankees took the field wearing jerseys that featured ½ next to the regular numbers. In the weeks after the game the jerseys were sold online in an auction. One of the jerseys went for many thousands of dollars as it was worn by Orlando “El Duque” Hernandez as he made a rehab start that day.

On August 25, 2002 the Staten Island Yankees once again wore a special jersey as part of a promotion. In support of the Make-A-Wish foundation the Baby Bombers sported 100% cotton red/white/blue tie-dye jerseys made by Augusta Sportswear. These jerseys were auctioned off during the game and were even featured live on the YES Network as the game was televised nationally. YES Network announcer David Cone even donned a jersey with his number to throw out the ceremonial first pitch. That game featured Chien-Ming Wang on the mound and Robinson Cano in the field.

The 2002 season was also the first year the Staten Island Yankees began selling replica jerseys in their team store, at the time only the home pinstripe jersey was for sale and was made by Jersey Express. That year they also introduced their first alternate logo. In keeping with Yankees tradition the team now had an interlocking “SI” logo. This logos was used across advertising and team publications. Many fans wanted to see it on the home uniform, but it would be many years before that came to fruition.

For the 2003 season the SI Yanks uniforms remained pretty much the same, the New York Yankees logo replaced the Staten Island Yankees logo on the left sleeve of the home jerseys. The road uniforms remained the same but the batting practice jerseys saw the interlocking SI logo replacing the script logo. All of the uniforms from this period were made by Wilson. These uniforms would not change in five seasons. The 2003 season also saw the introduction of the new road cap. The cap was grey and had a blue bill with the interlocking “SI” logo on the crown in blue thread. That season Centerplate took over the concessions and merchandising for the team and saw new replicas introduced in the team store, this time made by OT Sports.

Staten Island would not wear any special uniforms again until the 2005 season. On July 3, 2005 in the second game of a doubleheader the Staten Island Yankees came out to the field wearing six-color desert camouflaged jerseys. These jerseys were made by OT Sports and featured the script logo on the chest with the New York Yankees logo on the left sleeve and American flag patch on the right, they were then auctioned off and sold to fans to raise money for the NY-Penn League Charitable Foundation by the Staten Island Yankees Booster Club. Current New York Yankee Brett Gardner was one of the players that night to wear the uniform. 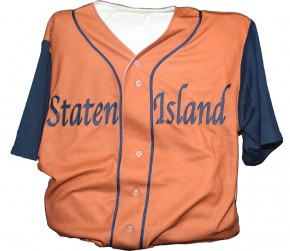 The 2006 season saw the Staten Island Yankees sport two special jerseys. Both jerseys were unique and were made by OT Sports, the first was a special Japanese jersey worn for Japanese Heritage Night and featured the script logo written in Japanese screen printed across the chest. The second was the more popular and more local Staten Island Ferry night jersey. The jerseys featured a rust-orange body reminiscent of the world-famous Staten Island Ferry that is next door to the ballpark and blue sleeves. Staten Island was stitched across the front of the jersey in blue twill and the back numbers were in blue and white twill. That will be the last time the Baby Bombers wore special jerseys.

After the 2006 season a new management company came in and began making changes. The first change made was to modify the interlocking “SI” logo to include the bat-and-hat. This change spruced up the then four year old logo. On the field the team’s uniform remained the same as previous years, not getting an upgrade until 2008. It was in 2008 the interlocking “SI” was placed on the primary home jersey. The new home uniforms sported the interlocking “SI” logo with the hat-and-bat on the left chest and a new “SINY” shield sleeve patch. The new uniform was accompanied by a new hat that featured the interlocking “SI” hat-and-bat logo as well as a new alternate cap that had the “SINY” shield logo. New for that season was an alternate pinstriped jersey that featured a unique script “Y” logo and a cap to match. On the road the Yankees road jersey only saw a minor change, the replacing of the primary logo with the new “SINY” sleeve patch and a new road cap that featured the new “Y” logo.


The new logo would also make its way to the batting practice/alternate jersey. The new BP jersey also dropped the sleeve trimming but retained the two-button pullover style. The batting practice cap was one of the most unique in sports, it featured a hat on a hat. You read that right, the BP cap at the time sported the “Yankees hat” logo on a gray New Era 3930 stretch-fit hat. The hat logo has proven to be popular with many hat enthusiasts across the nation.

For the most part the uniforms have remained the same since. In 2011 the Staten Island Yankees were sold yet again and after that season they dropped the second pinstripe jersey and the batting practice jersey. Now the team only wears two jerseys, the home pinstripe jersey and the road grays. This year the team will introduce a new batting practice cap that features a white version of the “Y” logo on a gray hat. Who knows what new fashion trends will happen in Minor League Baseball in the future and no one knows the future of the Staten Island Yankees uniform.