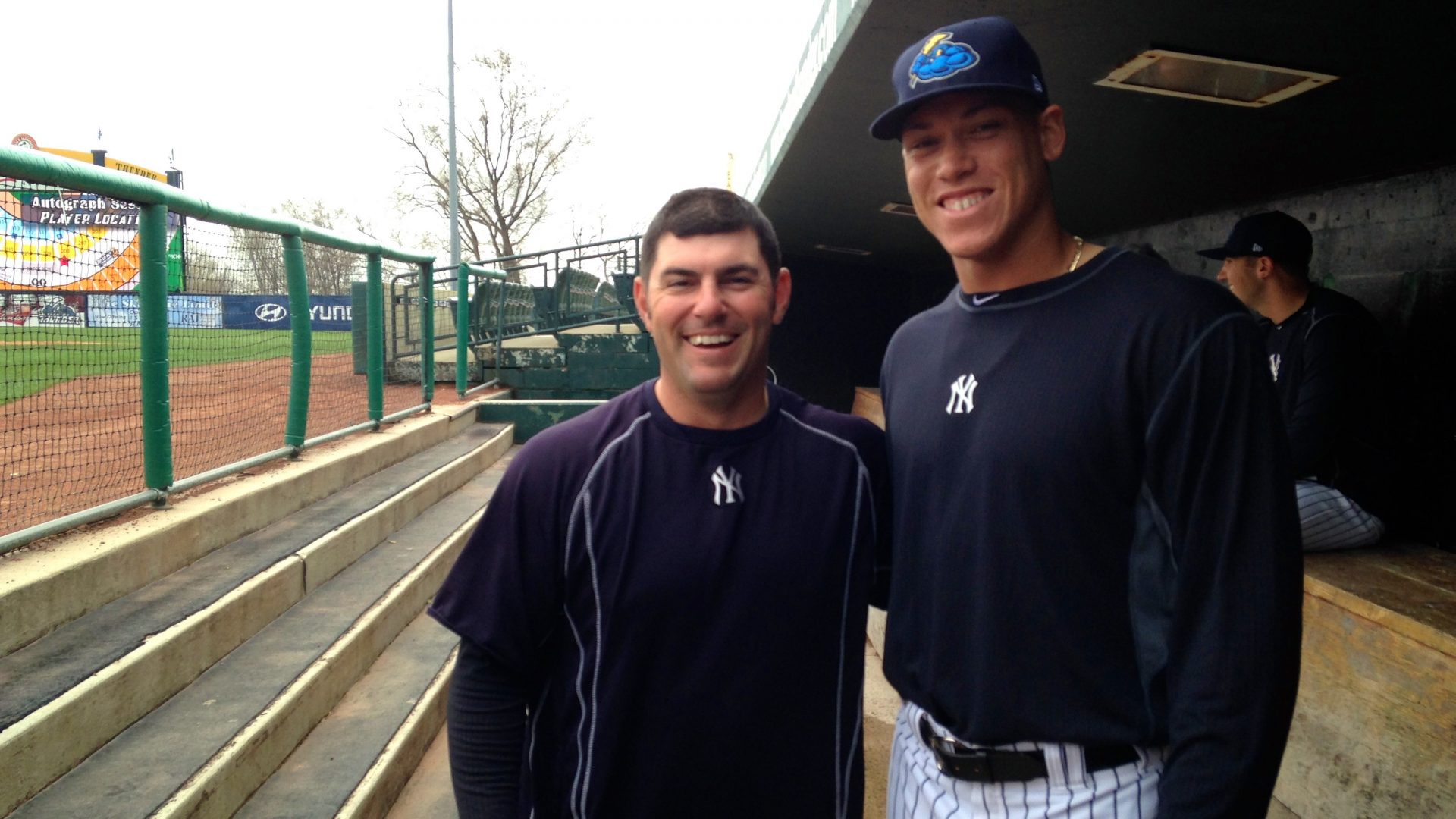 Yet, at his size, and with what he’s accomplished lately, that’s not easy to do.

“I know people have written a lot about me,” Judge said with a chuckle at Tuesday’s Trenton Thunder media day at Arm & Hammer Park. “I try not to read those stories. Problem is, my parents keep sending me a lot of the stories.”

The situation is this. Your power is rated plus-plus to begin with. In your first full year of professional baseball, you bat .308 (144-for-467) with 17 homers and 78 RBIs at Class-A stops Charleston and Tampa. That gets it started.

Then, after hitting ,278 (25-for-90) and impressing many with four home runs produced by this plus-plus power, more notice, and your Twitter account @TheJudge44 has well over 7,000 followers.  But what is described on that account – “If what you did yesterday still seems big today, then you haven’t done anything today,” keeps things in perspective for you.

Even if you hit a three-run homer to tie the Yankees’ Grapefruit League opener vs. the Phillies in Clearwater, Fla., a shot that came off lefty Mario Hollands, a pretty solid major-league reliever.

“I know I’m in the spotlight,” Judge, drafted in the first round in 2013 out of Fresno State, admits. “But all I think about is going out and playing my game.”

Which is a good approach, since just about every move Judge makes with manager Al Pedrique’s team will be chronicled, analyzed, gone over, digested, you name it, by who knows how many.

Judge is the type of person, not just a baseball player, who is comfortable in his own skin. He loves the game, enjoys the banter with the media and, everyday, is getting closer to maturing into the next great slugger to hit a certain stadium that stands at 161st and River in The Bronx.

And, aside from the power, this is a man, had he played a full season in either the South Atlantic League or Florida State League in 2014, would have led either in walks.

“I just want to go up there and get my pitch,” Judge said. “I’m a big guy, I can hit it. I would like an 80 miles-per-hour fastball down the middle, but I don’t think I will get any of those.”

Chances are, Eastern League pitchers will avoid throwing Judge any fastballs, even if they are 95 mph and in the strike zone. He will be challenged by every type of junk, off-speed stuff, slop, that a pitcher can dig up in this Double-A league. For that, he is ready and willing.

“If they throw all kinds of junk at me, and at a lot of other guys we have on this team who can hit, so be it,” he said. “I’ll still look to get my pitch.”

“I’ve played with the same guys as we’ve moved through the system. I know, if I mess something up, somebody will pick me up. It’s a comfortable feeling.”

It will be interesting to see what Judge is offered in the Thunder’s first series beginning Thursday in Erie’s Jerry Uht Park, a homer-happy edifice if there ever was one.

Judge is also becoming an excellent right fielder. If all goes well, he could reach The Bronx sometime during the 2016 season. Yet, there is still room, as Pedrique mentioned, for a little more patience with some of the off-speed stuff he will see at bat. Judge handles that, and he’s on his way.

Defensively, he wants to fine-tune his play.

“I’m working on making sure I have good reads and have good routes to the ball,” Judge said.

Both the Arizona Fall League and Spring Training gave him a taste if what it would be like in the majors.

“The Arizona Fall League gave me the opportunity to play with a lot of guys I had just heard about,” said Judge. “I got to meet them and talk to them. They all are regular guys, they’re just good at baseball. I hope to play well here, get a chance to go to Triple-A this year and play with and against them again.”

Certainly understandable. Judge fits right into that group which is certainly “good at baseball.”