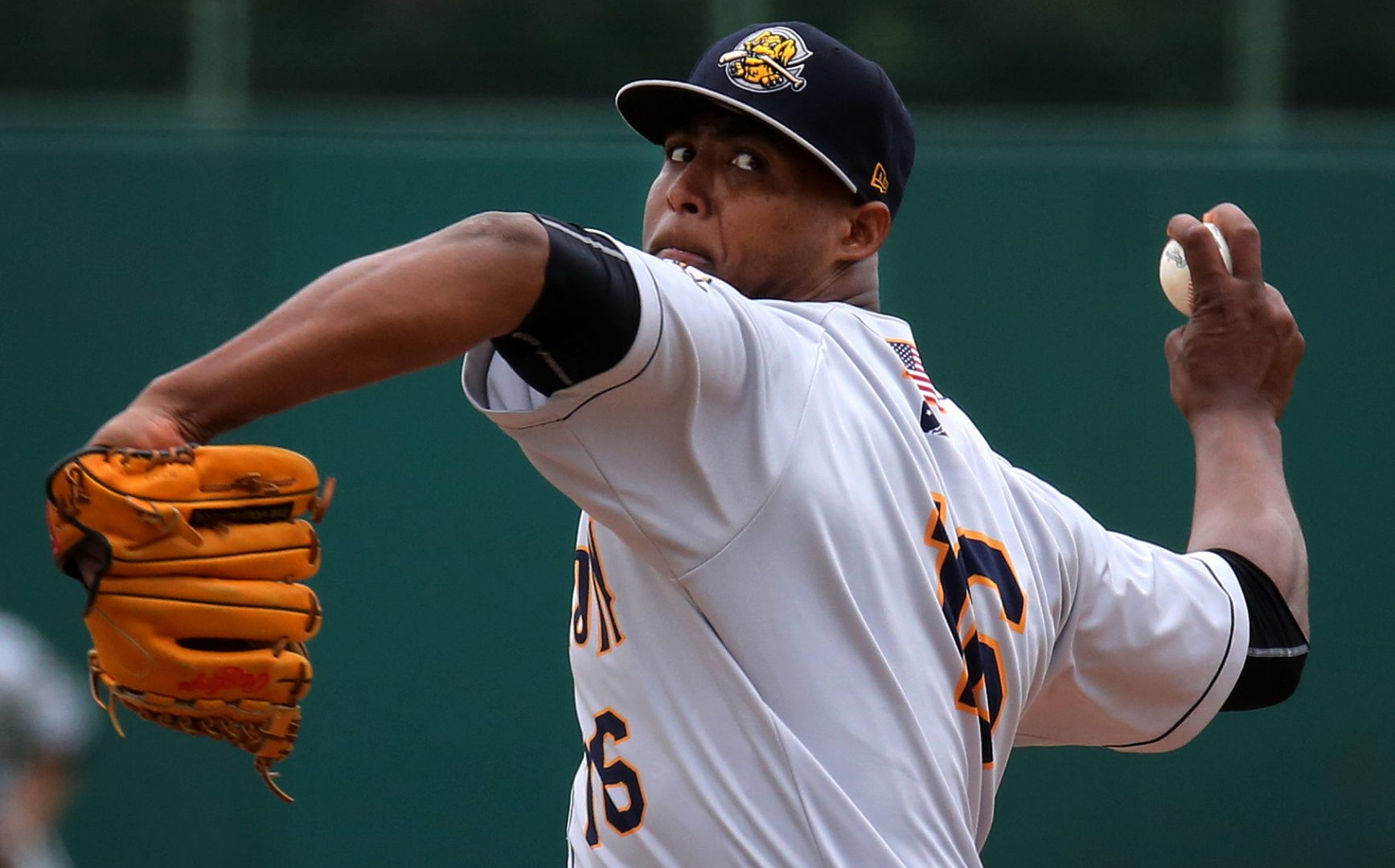 Charleston RiverDogs starting pitcher Domingo Acevedo works against the Lakewood BlueClaws at FirstEnergy Park in Lakewood on Wednesday, April 27, 2016. Acevedo chalked up a W with the RiverDogs beating the BlueClaws 3-2. Photo by Martin Griff

Yankees No. 5 prospect allows just two hits through eight innings as the RiverDogs clinch their fifth series victory of the season

LAKEWOOD, NJ – Domingo Acevedo dominated for eight innings while striking out nine and the RiverDogs broke up a 1-1 tie with a pair of runs in the eighth inning to take a 3-2 victory over the BlueClaws on Wednesday afternoon at FirstEnergy Park.

With fans on hand just two hours away from nearby Yankee Stadium to catch a glimpse of the No. 5 prospect in the New York system according to Baseball America, Acevedo (2-0) did not disappoint, punching out nine batters and allowing just two runs (one earned) on two hits and a walk to pick up his second win of the season.

The 6’7” righty out of Villa Almacigos, Dominican Republic was perfect through the first four innings and retired the first 16 batters he faced before yielding a one-out double to BlueClaws designated hitter Damek Tomscha in the bottom of the fifth. On the next play, a ground ball from centerfielder Jiandido Tromp was bobbled by Angel Aguilar at second, allowing Tomscha to score and make it 1-0 Lakewood.

Aguilar quickly atoned for his mistake by cranking his second home run of the season over the left field wall to lead off the seventh to tie the ballgame up at one apiece.

Lakewood threatened in the seventh when highly touted Phillies prospect Jose Pujols walked with one out, but a spectacular over-the-shoulder catch by Jeff Hendrix in center robbed Tomscha of extra bases and kept the game deadlocked at one.

After collecting just three hits off of BlueClaws starter Shane Watson over the first seven innings, Charleston matched their output with three hits in a row off of lefty reliever Zach Morris (0-1), all with two outs, to take a 3-1 lead in the top of the eighth. RiverDogs catcher Radley Haddad ripped a double to the right field corner to start the two-out parade, and Hendrix and Thairo Estrada followed up with a pair of RBI singles to put Charleston on top.

Acevedo stepped back onto the mound for his eighth inning of work and made just his second mistake of the ballgame, a two-out solo home run on a pitch to Lakewood left fielder Venn Biter that trimmed Charleston’s lead to just a run.

Andrew Schwaab entered the ballgame in the bottom of the ninth to pick up his fourth save of the season after allowing Josh Tobias to lead off the inning with a single.

Acevedo’s eight innings was the longest start put in by a RiverDogs arm this season and it was the third time Charleston’s staff held opponents to three or fewer hits in a ballgame. RiverDogs pitching leads the South Atlantic League with an impressive 216 Ks on the season through 20 games.

The RiverDogs will go for the sweep of the BlueClaws on Thursday night at 6:35pm in the finale of the three-game series in Lakewood. The RiverDogs will send RHP Yefrey Ramirez (NR, 0.00) who will make his 2016 debut after getting the call up from Extended Spring Training on Tuesday, while the BlueClaws will counter with RHP Luke Leftwich (0-1, 3.75).