Aguilar Off To Hot Start With A New Approach 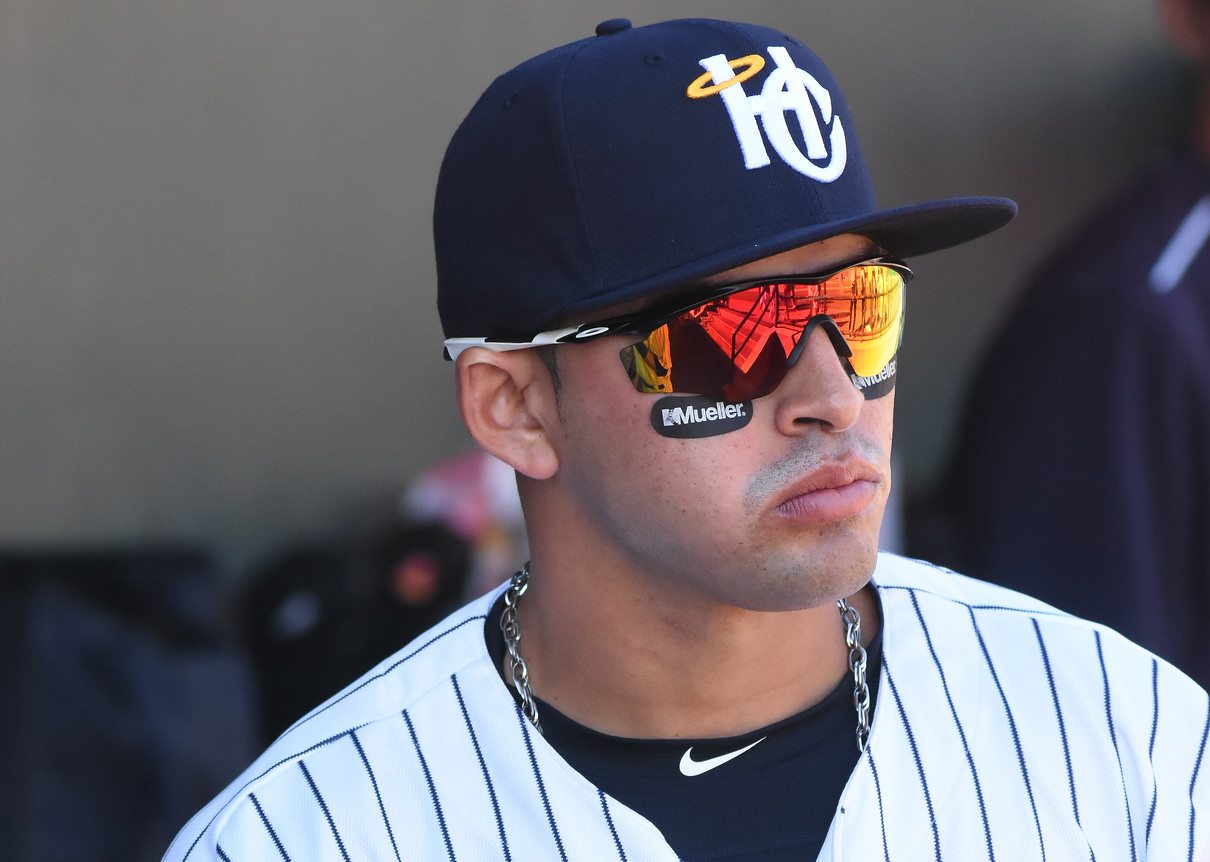 Angel Aguilar has been one of the most important players on the Charleston RiverDogs this season. Aguilar is currently batting .330 with six doubles, one home run, and 17 RBI. After struggling with injury last season, he’s come back healthy and focused for 2017.

“I’m good to go. I worked hard in the offseason, and my body’s in good shape,” Aguilar said.

Aguilar started off last season with the RiverDogs, but then after he got hurt, he was sent to Staten Island when he came off the disabled list.

The New York Yankees had signed Aguilar as an international free agent in 2012 from Venezuela at the age of 17. He will turn 22 in June and is entering his fifth full year in the organization. 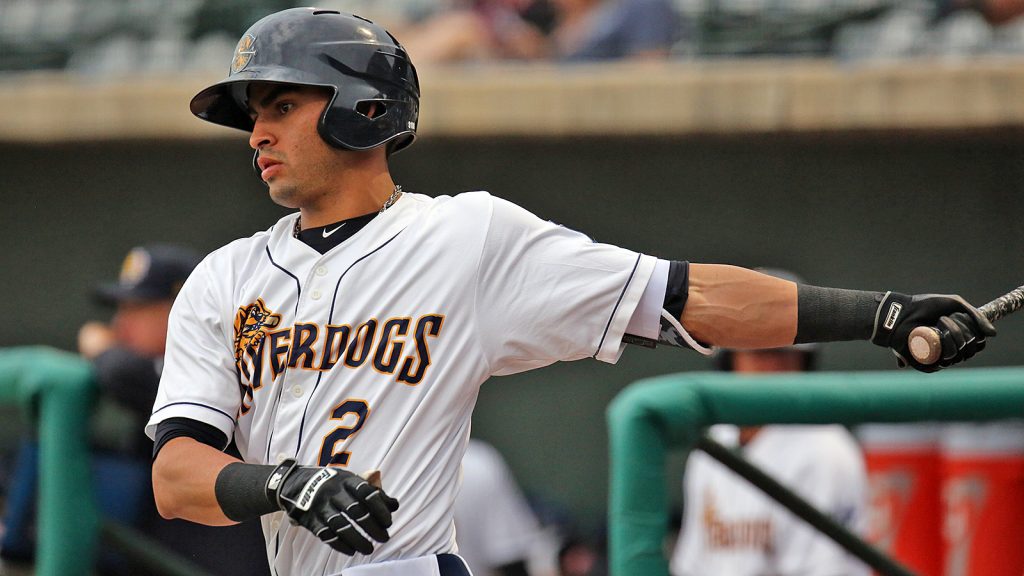 Aguilar has revamped his approach at the plate and is excelling. (Martin Griff)

When Aguilar was sent down to play for Staten Island last season, the Yankees wanted Aguilar to get some more time at shortstop, as Hoy Jun Park and Kyle Holder were sharing time primarily at that position in Charleston. While with the RiverDogs last year, Aguilar played mostly third base and adapted well to the position.

Aguilar struggled offensively last year producing a slash line of .221/.266/.373 between Charleston and Staten Island. Aguilar attributes those struggles to trying to hit the ball too hard and not focusing enough on making good contact. “A year ago, I was focusing on trying to hit the ball hard, and this year my approach has been to maybe not worry about if I hit the ball a long way, but on making more contact and making better contact especially when I’m behind in the count.” This year, his revamped approach is working as he’s been a dangerous bat in the RiverDogs lineup. 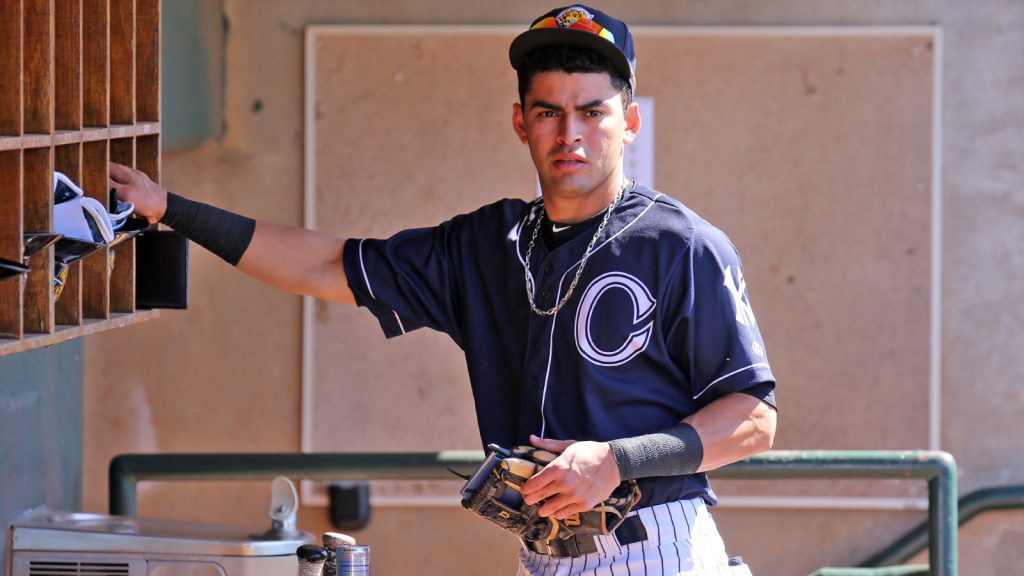 Aguilar always had the tools and now is reaping the benefits. (Martin Griff)

Part of what’s also helped Aguilar succeed is seeing a new, but familiar face in the dugout. First-year RiverDogs manager Pat Osborn had managed Aguilar in 2014 with the Yankees West Gulf Coast League rookie team. “I had him in the Gulf Coast League, and he was, for me, the best player in the league and it wasn’t even close. The last couple of years, he’s ran into some troubles. Tools-wise, he’s got everything you want,” Osborn said of Aguilar.

“Obviously I think a lot of Pat because he’s treated me very professionally with a lot of respect and the opportunities he gave me a couple of years ago and this year has helped him to relax and I feel like I can play better because he has shown the confidence in me both in the Gulf Coast League and in Charleston as well. He’s one of the best managers I’ve played for,” Aguilar said about his current manager.

He also attributes the atmosphere in the clubhouse for his success this year. “Because of the number of the guys have played together for years, it’s like we’re family. We take losing hard, and we celebrate winning together. We pick each other up to make sure that no one feels left out no matter what happens,” Aguilar said. 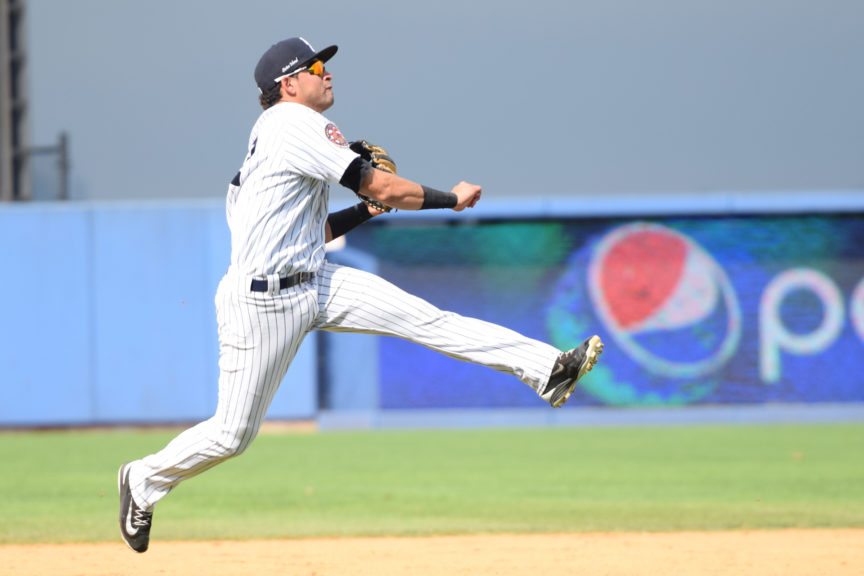 Angel Aguilar has shown he can get it done in the field in the past, now showing he can succeed at the plate. (Robert M. Pimpsner)

This year, Aguilar finds himself playing mostly third base once again in Charleston. “I didn’t notice that much of a difference. I just had to get used to the ball coming off the bat a little bit, but it wasn’t that different,” Aguilar said of his transition from playing middle infield.

As for his goals for 2017, Aguilar is focusing on staying healthy and preparation. “My goal is to work is hard as I could every day and to stay healthy and see how far I can move up in the organization,” Aguilar said.

Aguilar also leans on family and faith to get through the long season. “I have a wife, and I love her and my family, and I’m a man of God, and I’m a very religious person. I would like people to know I’m a very, very humble man.”