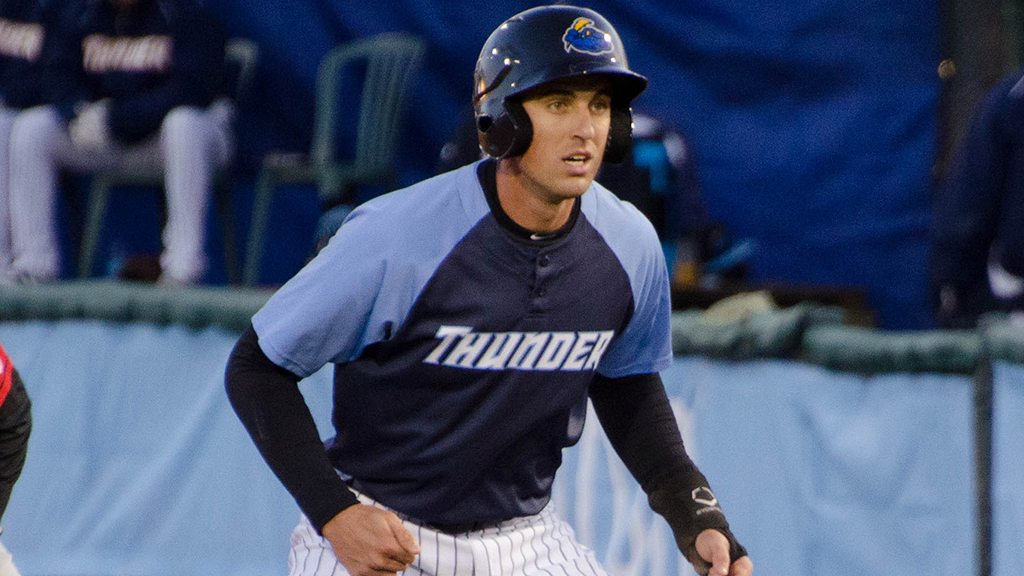 To begin, he was a star basketball player in high school – at Red Oak High School in Red Oak, Okla. He finished his career with 3,251 points, which is fifth-most in Oklahoma high-school history. He was about to accept a basketball scholarship offer to Missouri State University, but, after being drafted by the Kansas City Royals in the 13th round of the 2009 selections, he opted for professional baseball.

At 6-foot-4, 220-pounds, he displayed his jumping ability in the Thunder’s 4-0 opening loss to Erie Thursday night before 6,502 fans at ARM & HAMMER Park, leaping well off the warning track at the right-field wall, robbing Erie’s Dean Green of a potential hone run.

“I’m glad to be with the Yankees,” said Adams, a native of Talihina, Okla., who turned 26 last Nov. 13. “I know they like athletic outfielders – you can see that with the guys they have here and at Triple-A – and I certainly think I am in the athletic category.”

Nobody doubts that of Adams, who has the genuine ability to play in the major leagues. The second matter he can claim by himself in the Thunder clubhouse is he actually has played in “The Show,” having appeared in six games with the Royals in 2014.

“That’s certainly where I want to get to again,” he said.

Then, to clear a spot on the Yankees 40-man roster, he was designated for assignment Feb. 1, then outrighted to the minors Feb. 10 – with an invitation to Spring Training  – in what was a numbers game. This all went on while he was playing winter ball for Zulia in the Venezuelan League, batting .273 (27-for-99), with three homers and 16 RBIs in 24 games.

Not even fellow Thunder outfielder Jake Cave had as much off-season paperwork. All in all, in Arkansas, Nebraska and Venezuela,  Adams belted 21 homers.

“I hope to help this team with some power, speed and defense,” Adams said. “I’m just looking to contribute. Where I am, or what level I am at, is out of my control. I just want to contribute with the ability I have.”

He feels something important to minor-league players is taken care of by both the Royals and Yankees.

‘”Everybody talks about how the Royals take care of their players,” said Adams. “The Yankees do as well. So far  I’m enjoying things with the Yankees. This is a great clubhouse, and I can see (2016 Thunder manager) Bobby (Mitchell) will be great to play for.”

“I’m just happy with the opportunity.”

The Yankees thought enough of Adams to give him a shot, They took a long look at him in Spring Training and liked a lot of what they saw. A few solid weeks would likely lead to a promotion to Triple-A for him.

Right now, he’s happy with a new chance with a new organization in New Jersey.