You could not have asked for a more perfect day to host a Back-to-Baseball Bash than yesterday. The sun was out and it was a comfortable 70 degrees as the Staten Island Yankees opened the gates to the Richmond County Bank Ballpark to give the fans a small taste of what is to come for their fifteenth season.

The day started off at 9:00 a.m. as fans began to lineup at the ticket booth to be the first to purchase single-game tickets for the 2014 season. Those who purchased tickets then had the opportunity to meet New York Yankees great and former World Series MVP Hideki Matsui for an autograph signing in the team store. The chance to meet Matsui was a big draw for the Baby Bombers as hundreds of fans lined up around the block and down the entire length of the stadium concourse.

That is not all that was on hand at the ballpark. Fans in attendance were able to check out some new merchandise in the team store, including the team’s brand new Diamond Era Batting Practice Cap. The kids had the opportunity to have some fun down in the Kid’s Zone in left field. Scooter and Pinstriped Patrol member Caitlin entertained the crowd with some impromptu dancing. After fans were treated to a Wagner SeaHawks Double Header.

One of the big changes this year at the ballpark will be concessions. Gone is old frozen, generic stadium pizza as it has been replaced with oven-fresh pizza from nearby Pier 76. I had the chance to sample a couple of slices of pizza and enjoyed the traditional NYC thin crust pizza. As a foodie and a pizza lover I have strong faith that the ballpark fans will love the change. 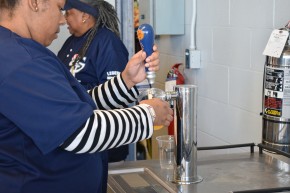 The very first America’s Pastime Summer Ale being poured at the ballpark.

In addition to the delicious new pizza the Ballpark at St. George will have another piece of local flavor. Staten Island’s own Flagship Brewery Company will have a special America’s Pastime Summer Ale on tap. The Flagship Brewery is the first Brewery to call the island home in over 60 years and is located just down the block from the stadium. You will not find a fresher beer in the stadium. Having the chance to sample one of the first cups of the beer to be poured in the stadium, I can vouch that it is great.

This coming season you will see more of what makes Minor League Baseball great at the ballpark. In addition to the play of the field the team has many great promotional and theme nights planned including a world record attempt on Opening Day, WWE Hall of Famer Sgt. Slaughter will be on hand for a game as well as Jersey give-a-ways and even a 15th birthday celebration for Scooter “The Holy Cow.”

Overall it looks like the team is going to be a great season at the Ballpark at St. George.

The very first America’s Pastime Summer Ale being poured at the ballpark.