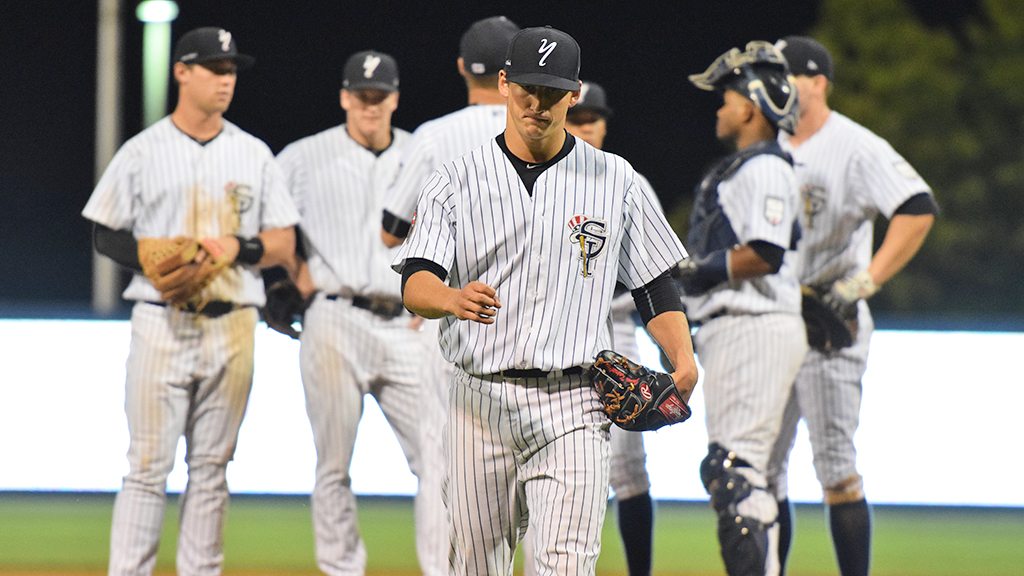 STATEN ISLAND, NY –With a sweep of the Tri-City Valleycats, the Staten Island Yankees advanced to their seventh New York-Penn League Championship Series, where they had never ended up on the losing side.

Unfortunately, as the Yankees learned on Tuesday night, there’s a first time for everything.

Casey Hughson of the West Virginia Black Bears hit a two run blast off of Josh Roeder, as the couple runs scored on the hit that sailed over the right field electronic scoreboard at Richmond County Bank Ballpark was just enough to clinch the franchise’s first NYPL title in a 3-1 victory.

Not even 24 hours earlier, the Yankees fell 4-3 in West Virginia in 11 innings, allowing the Black Bears to complete the series sweep. The Pittsburgh Pirates’ affiliated organization won the title in their first year in West Virginia, having spent almost two decades under the Jamestown Jammers moniker.

“It’s very disappointing,” said Staten Island manager Pat Osborn, who just completed his first year with the team. “I think it’ll be a good experience for these kids, though. They were just involved in four games that went down to the wire. They were close, they were tough, we went ahead, we fell behind. That experience shows that these kids have matured which is all you can ask for.”

Lost in the heartbreak of defeat was the magnificent start of James Kaprielian, the Major League Yankees’ 1st round pick who spent the final four weeks of his first professional season in Staten Island. Tasked with keeping Staten Island’s season alive, Kaprielian struggled in the early going, walking the first two batters he faced.

“I struggled early on and made some mistakes,” said the 1st round pick out of UCLA. “It obviously wasn’t what I wanted. I had to change the approach. I was trying to do too much.”

However, he would go onto to retire the next 12 Black Bears in order, allowing the Yankees to keep pace. In the bottom of the 6th, it looked like his domination was finally going to pay off, as Jhalan Jackson, who smacked a solo shot in his first Staten Island game back in June, duplicated the feat in what’s likely to be his last, giving the ball a one way trip toward the Empire State Building and Staten Island a 1-0 lead.

“At the end of the day, I just want to put zeros on the scoreboard and keep these guys in the game,” he said. “It is what it is, and I just want to give these guys an opportunity to stay in the game and win. Overall, I think I did ok, but I need to learn how to make adjustments sooner. You’re not always going to make it out of situations like that that easily.”

Kaprielian would start the 7th inning, armed with the 1-0 lead, and managed to get the first out of the frame, but was removed the game afterwards. His night would end with 6 ⅓ shutout frames, allowing 3 hits and no walks after the duo he threw in the opening stages. He also struck out six, which tied his career high, set September 3. The 6 ⅓ innings thrown broke his career record, set in Game 1 of the 1st round against Tri-City.

“I really wish I could’ve let (Kaprielian) stay out and pitch the 7th. But his health is first and foremost. He’ll get that opportunity when he’s in the big leagues. I’m glad I got to experience this kid he has a bright future.”

“I felt good to go,” Kaprielian said when asked about pitching the 7th. “I had a tight grip on the ball but I recognize (Pat) is doing is job and there’s people protecting me. There’s an understanding and a plan for me. My job is to compete and work hard every day and trust what they’re doing.”

However, despite his taming of the Black Bears, Kaprielian’s first professional win was not meant to be.

With James Reeves subbing in, Carlos Munoz hit a solo shot into right, tying the game up at a run each. Staten Island worked its way into a prime opportunity to score with runners at 1st and 3rd and 1 out in the bottom half of the 8th, but the West Virginia bullpen worked around to preserve the tie that set up Hughson’s heroics.

Despite falling in the championship series, Osborn, in his first year as Staten Island skipper acknowledged how special the team was, and how much he enjoyed his first experience in managing professional baseball.

“It was a heck of a year,” Osborn said. “We got better and that’s all you can ask for. I’m really pleased with the way we conducted ourselves all year long. It was a real exciting team.“