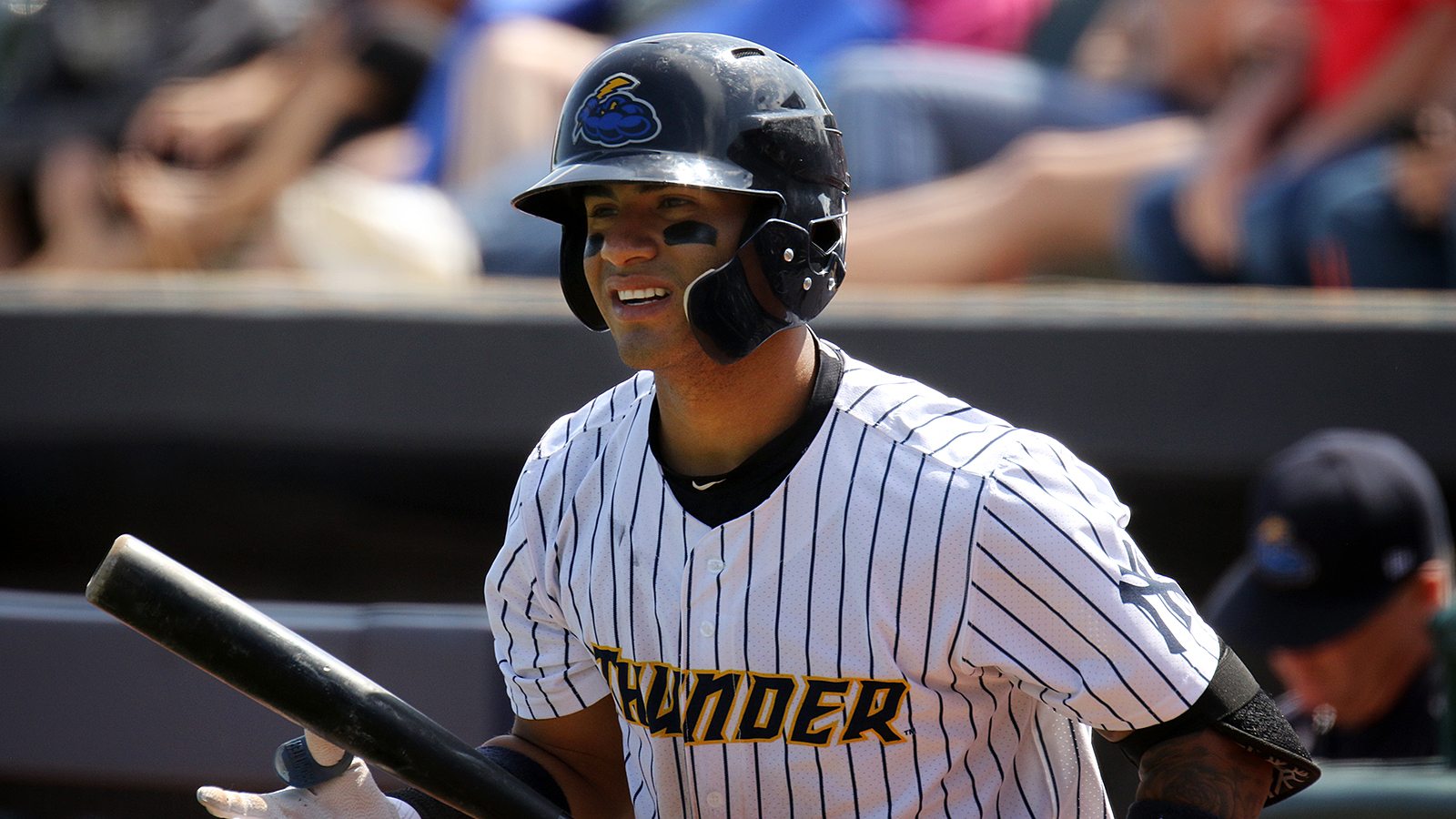 Feature Sized- Trenton Thunder’s Gleyber Torres during a game against the Portland Sea Dogs at ARM & HAMMER Park in Trenton on Sunday, May 21, 2017. (Martin Griff)

It is always interesting to see how different sites and publications view a New York Yankees farm system that has grown into one of the best in baseball. Today, it was Baseball Prospectus who unveiled their list of the top ten prospects in the Yankees organization.

Of course, due to the deals at the deadline, the list is going to look a lot different than it did last year as right-hander James Kaprielian, infielder Jorge Mateo, and outfielder Blake Rutherford are all in different organizations.

With that being said, the main constant on both of these lists is infielder Gleyber Torres, who is ranked as the top Yankees prospect. Despite having his 2017 season cut short due to Tommy John surgery, the 20-year-old infielder shined at Double-A Trenton and Triple-A Scranton Wilkes-Barre (.287/.333/.480, seven home runs, 34 RBI’s, seven steals in 55 bases).

While it would be tough to see Torres start 2018 in the big leagues because of his injury, he is a player worth the price of admission due to his ability to play all over the infield and his constant contact hitting at the plate. It has helped him become one of the top prospects in all of baseball.

On Baseball Prospectus’ list, there are three players that fans are getting to know right now in the Arizona Fall League. Those three are outfielder Estevan Florial (number two), left-hander Justus Sheffield, and right-hander Albert Abreu.

Florial got to play in the Futures Game this past July in Miami and excelled at Low-A Charleston before spending the final 19 games at High-A Tampa. With the Riverdogs, the 19-year-old had a slash line of .297/.373/.483 with 11 home runs and 43 RBI’s. He is tied for third among all Scottsdale Scorpions in runs scored.

Sheffield got the chance to start in the Fall Stars game last Saturday (one run allowed in two innings). While he spent almost two months on the disabled list this year, he was still tied for second on the Thunder in strikeouts with 82.

Abreu has had some issues with his control so far in the AFL (12 walks in five games). Despite the high walk total, there is a lot of potential (acquired in the Brian McCann deal). He had two stints on the DL this year, but there is a lot to like about the 22-year-old who had 11 strikeouts in an outing with Charleston back on April 12.

Sheffield’s teammate at Trenton, Domingo Acevedo, also made the list at number seven. Acevedo is known for his fastball that can reach up to triple digits in velocity. The 23-year-old right-hander did have ten outings in which he had seven or more strikeouts in 2017.

When you look at this list carefully, the Yankees have seven pitchers in the top ten. This includes the last three on the top ten in right-handers Domingo German (made his big league debut this season), Matt Sauer (Second-Round pick in the 2017 MLB Draft), and Luis Medina (9.1 strikeouts per nine innings in Gulf Coast League and Rookie-level Pulaski).

The pitcher who ranked the highest on their list was right-hander Chance Adams. The 23-year-old played the bulk of this season for the RailRiders and went 11-5 with a 2.89 ERA in 21 starts. While he was the only Scranton pitcher to go over 100 strikeouts (103), he also did lead the team in walks (43 in 115.1 innings).

After Torres and Florial, the other position player on the list is third baseman Miguel Andujar (number six). Andujar had an eventful big league debut against the White Sox (3-for-4, four RBI’s on June 28). While with Trenton and Scranton, the 22-year-old hit .315 with 16 home runs and drove in 82 runs. Also, he had 72 hits in 58 games with the RailRiders.

Of course, with the Yankees, some notable prospects are going to be left off some lists because of the depth of talent in the organization. One name that was given honorable mention that can rise this list as 2018 progresses is infielder Thairo Estrada.

While the big names of Aaron Judge, Luis Severino, Gary Sanchez, and Clint Frazier are no longer on these lists, the New York Yankees farm system still has a lot of notable names that are worth keeping an eye on.