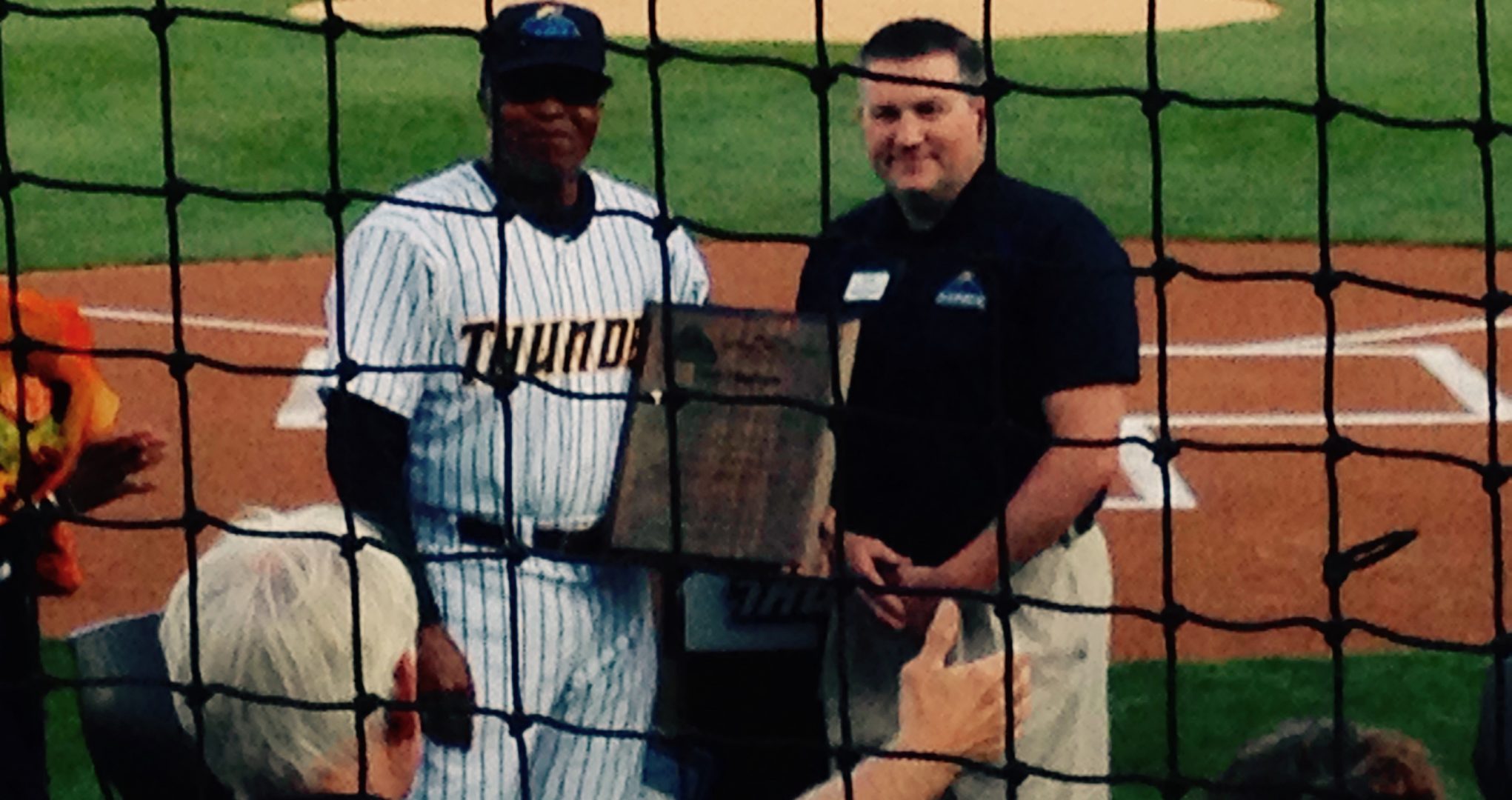 Not even with his wife, Haiba, with him from Los Angeles on this trip, as he returned to Trenton to fill in for present Trenton skipper Al Pedrique, who is in Seattle for his daughter’s high-school graduation this weekend.

“I thought about this (the Trenton Baseball Hall of Fame induction) all night, sleep-thinking,” said Franklin. “It really is some kind of honor. Everybody in this community was so great to me during the eight years (2007-14) I was here. The Thunder have some of the most passionate fans in baseball.

“When guys like David Phelps came back for a rehab assignment, we saw how much better they were compared to when we had them here.”

With Franklin on the field with his wife and Thunder dignitaries, that was confirmed in four video tributes from a quartet of present Yankees – pitchers Adam Warren, who threw 6.2 innings of effective baseball in Saturday night’s Yankees victory, and Dellin Betances, outfielder Brett Gardner and infielder Jose Pirela, which left Franklin touched.

Warren, Betances and Gardner talked about “how great it was to play for Tony” when they were in Trenton and “how you helped put us on the road to the majors.” Pirela mentioned how, “Tony’s help was a major factor in my becoming a major-league player.”

As Thunder broadcaster Jon Mozes read what was on the plaque to the Arm&Hammer Park crowd of 6,689, a montage of Franklin’s accomplishments, his lifting of Eastern League Championship trophies from 2007, 2008 and 2013 and other moments of Thunder triumph, played on the video board. Credit the Thunder, as always, with doing a superb job with ceremonies such as this.

Franklin is the longest tenured manager in Trenton franchise history and led the Thunder to each of those three championships,.  Over his eight seasons at the helm, the Thunder went 635-532 (.544 winning percentage). The 2013 Thunder went 6-0 in the playoffs, making them the league’s first team to go undefeated in the postseason since 1991. Overall, the Thunder made the playoffs five times in eight seasons under Franklin and compiled a 26-10 record in postseason play.

It was brought up Franklin could add three wins to that Eastern League record total this weekend. He now actually has 637 Eastern League triumphs after Saturday night.

“Not worried about that,” Franklin chuckled. “Al’s team is playing really well. It’s a great bunch.”

As he always has been, Franklin was gracious, telling the crowd he enjoyed “the opportunity be a part of so many summers in Trenton.”

He received the expected standing ovation from the Arm&Hammer Park crowd.

The Thunder (32-24) responded by winning their seventh straight game, 6-2 over Harrisburg, rallying with five runs in the eighth inning. The key blow was a three-run homer off the bat of Gary Sanchez. Jake Cave, Jose Rosario and Ali Castillo each had a pair of hits. Brady Lail threw a strong seven innings in a no-decision, allowing two runs, five hits, no walks and notching eight strikeouts.

Franklin will return to Tampa after his weekend, with the draft beginning Monday and the selection of players for short-season Staten Island, his Pulaski team and the two Gulf Coast League clubs taking place. Then his Pulaski team will open its 2015 Appalachian League season June 23.

“What the Yankees want me to do is instill what it takes to play the game consistently and advance, with the major leagues as a goal, with the younger players,” said Franklin. “It’s an important part of our whole development program.”

And Hall-of-Famer Franklin is playing a rather important part.