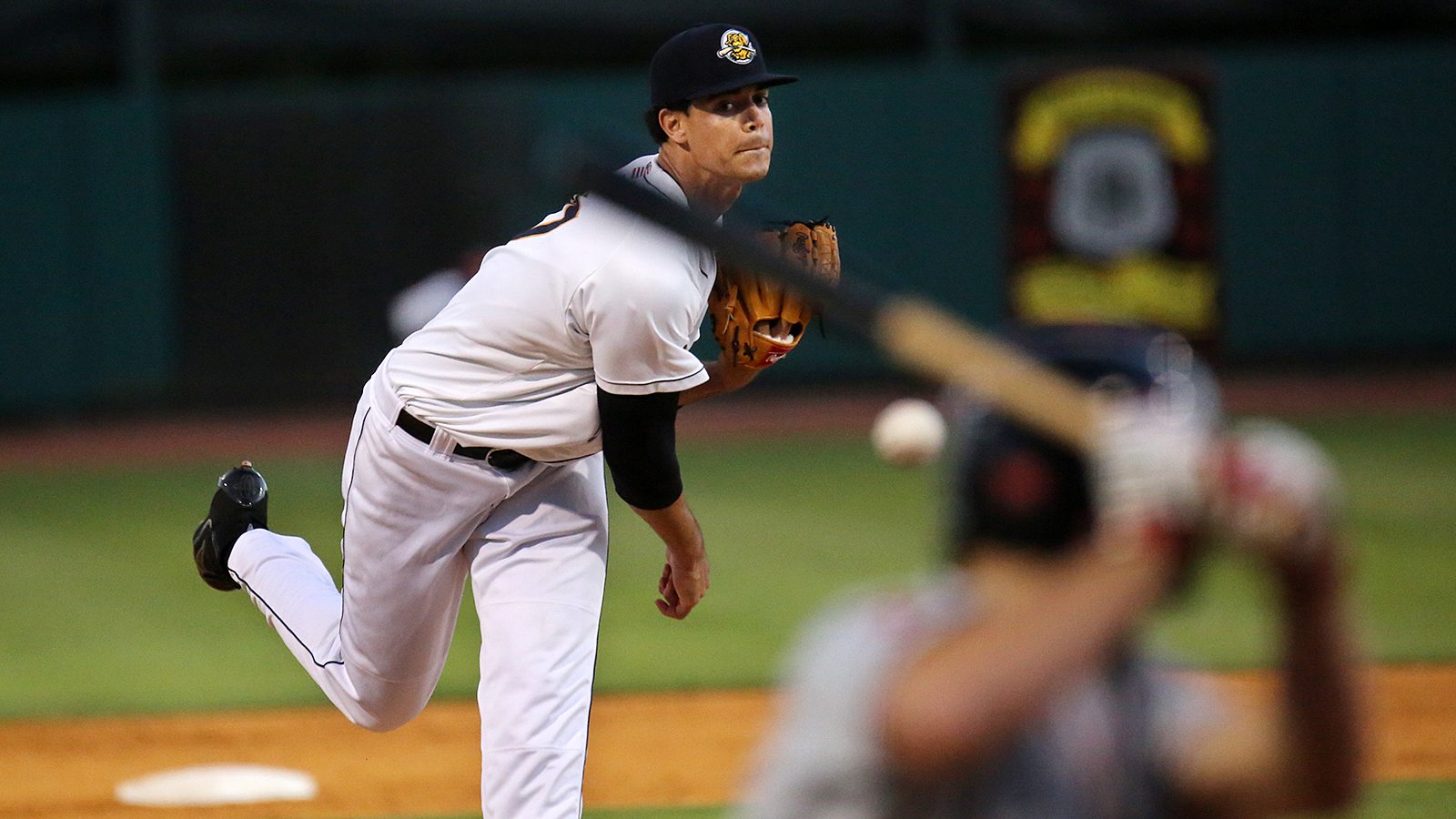 Another Greenvile-Charleston game, another pitcher’s duel. The Charleston RiverDogs defeated the Greenville Drive by the score of 1-0 Saturday night at Joe Riley Park. The Drive won game won of the series Thursday night by the same score and the Dogs took game two Friday night by the score of 2-1 in 13 innings. “It’s funny, I was talking to their manager at the plate meeting and apparently they’ve played in a ton of one run games this year. It’s continued to appear this series, but good pitching, good defense,” RiverDogs manager Patrick Osborn said.

The RiverDogs sent Frecier Perez to the mound to face off against the Drive and he pitched six strong innings allowing just four hits and striking out five. “Really good command of the strike zone. He’s repeating his delivery. He’s really, really coming on. It’s fun to watch,” Patrick Osborn said of his starting pitcher’s effort.

Perez did run into trouble in the seventh though when he walked Ryan Scott to start the inning, followed by single off the bat of Tyler Hill to left field putting runners on first and second. Christian Morris (W, 2-1, 1.80 ERA) came into relieve Perez and Roldani Baldwin laid down a bunt to move the runners to second and third. The Dogs then pulled the infield in and got Tucker Tubbs to hit it right to shortstop Oswaldo Cabrera who checked the runners and got the out at first. The Dogs then placed Mitchell Gunsolous at first with an intentional walk. Chris Madera then grouunded back up the middle which was speared by Morris who threw on to first to record the final out of the inning and keep the game scoreless.

In the bottom of the seventh, Angel Aguilar ripped a double to left field to lead things off for Charleston that chased Greenville starter Robby Sexton (L, 0-5) out of the game. Hunter Smith came into relieve Sexton and got Isiah Gilliam to line out to second base. Ben Ruta followed that by ripping a single up the middle to score Aguilar with the only run of the game. The RiverDogs collected just three hits in the game. “It’s kind of been who comes up with the big hit and tonight we got it with a leadoff double there in the seventh and Ben Ruta comes up with the one-out single to center field to push across the run,” Osborn said.

“I was looking for a pitch out over the plate and he threw me a first pitch changeup. I saw it up, I saw it early and I was able to keep my hands back to drive it up the middle,” Ruta said of his at-bat.

Trevor Lane picked up his first save of the season pitching the ninth inning. He allowed a leadoff to Scott, but he induced a 6-4-3 double play from Hill. He then got Roldani Baldwin to line out to Gilliam in right field to secure the victory. “Christian Morris was great coming into the middle innings and Trevor Lane to close it out,” Osborn said.

The RiverDogs move to 25-23 on the season while the Drive fall to 29-18. The RiverDogs are now just four and a half games behind the first place Drive in the first half Southern Division race. The two teams face each other in the final game of their four game series Sunday at 5:05 PM at Joe Riley Park.