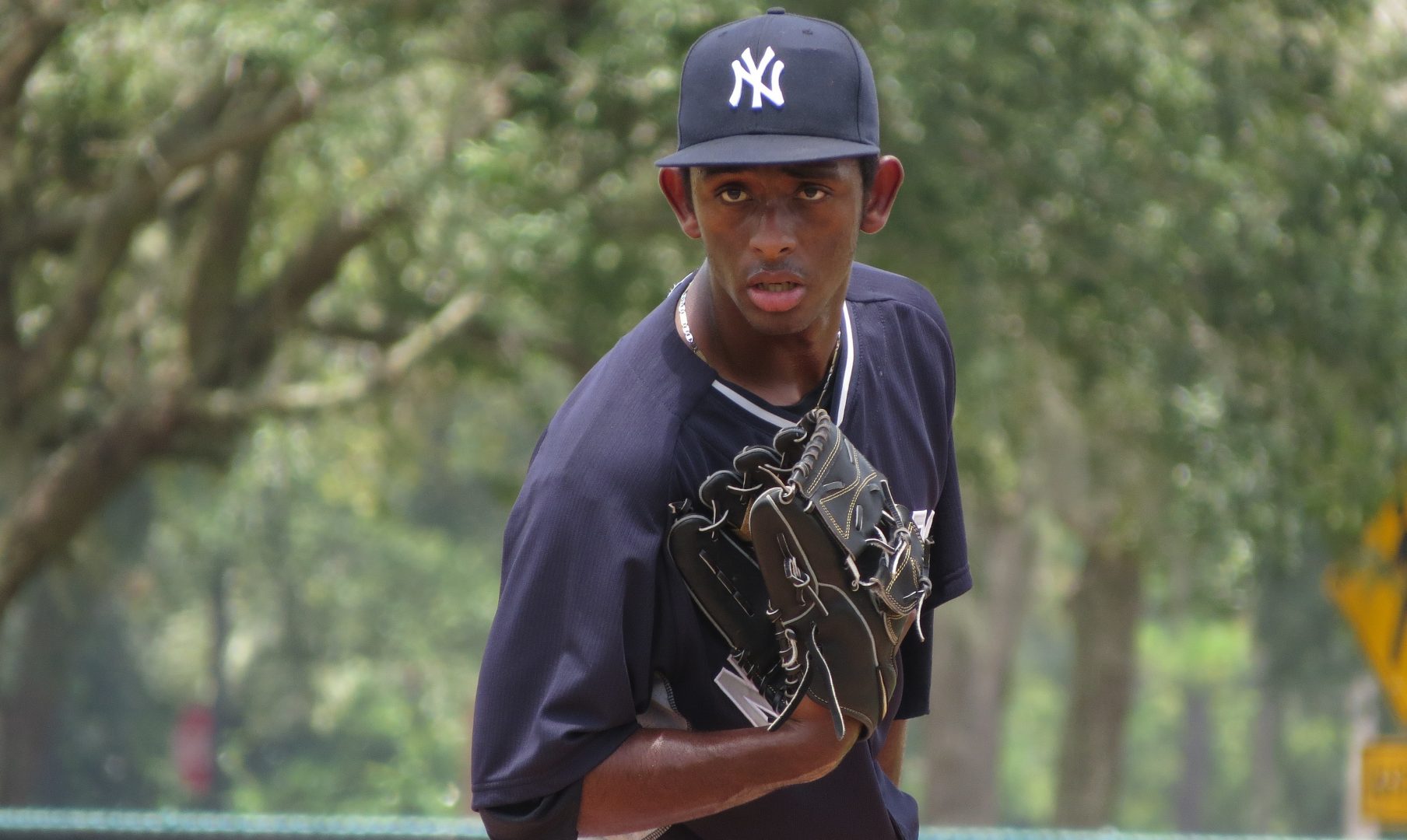 The Yankees at any one time have over 225 players signed to minor league contracts so it can become difficult to narrow it down to the top 50-60 prospects in the organization.  We looked at who made our official top 50 prospects list, and those who just missed the cut and ranked #51-60.  Now let’s take a look at the best of the rest, 10 prospects that you should keep an eye on in 2016.

[nextpage title=”1″ ]Click the numbers to navigate through the list.[/nextpage]

Signed as a non-drafted free agent on August 1, 2013 Jaron Long has been a pleasant surprise for the Yankees. In 63 games in the minors he owns a 21-19 record with a 3.26 ERA and 234 strike outs in 309 2/3 innings pitched, reaching as high as Triple-A this past season.  A three-pitch pitcher but does not overpowering stuff, relying on command and control to induce groundballs to get batters out.  He can find himself in the Triple-A rotation in 2016 and possibly make his MLB debut if he continues his success.[/nextpage]

Billy Fleming is another non-drafted free agent that was signed by the Yankees and one that has the ability to contribute in the minors as well. He signed on July 23, 2014 and started his career hitting .330 in 31 games between the GCL and the NY-Penn League.  He started the 2015 season with 5 games in Tampa in May, hitting .364 with 2 walks before going back to extended spring training.

Fleming then was assigned to the Pulaski Yankees where he continued to hit, hitting .338 in 15 games and began bouncing the system.  He spent 26 games with the Charleston RiverDogs where he hit .330, 14 games in Double-A Trenton where he hit .250 and eventually 2 more games in Tampa where he went hitless to lower his season average to .235 with the T-Yanks.

Singed as an international free agent by the Yankees on June 1, 2013 Anderson Severino is a pitcher that prospect fans should keep an eye on. At 5-foot 10-inches tall he is not intimidating but has the stuff to contribute. In 2014 he made his professional debut as a 19-year old with the DSL Yankees appearing in 4 games, making 2 starts, throwing 11 1/3 innings and striking out 17 batters.  The young lefty made his state-side debut in 2015 where he was 2-3 with a 2.61 ERA striking out 32 over 41 1/3 innings in 11 games.  He limited hitters to a .204 in the Gulf Coast League.[/nextpage]

Drafted out of Fresno State in the 23rd round of the 2015 draft Garrett Mundell had one impressive debut season. In 18 games between Rookie-level Pulaski and Single-A Charleston he has yet to allow a run.  In addition, he struck out 35 batters over 26 innings of work, walking just 7 batters while limiting opposing hitters to just a .156 batting average.  Armed with three pitches, a splitter, a slider and a fastball that usually sits 90-92 miles per hour that has topped out at 94-95 miles per hour.[/nextpage]

Originally signed as an international free agent by the Los Angeles Dodgers, Miguel Sulbaran is one of the best pitchers to not be featured in our Top 50 prospects list. At 21 years old he has already got a taste of the minor’s highest level and in 92 games in the minors he owns a 29-20 record with a 3.47 ERA, striking out 356 batters in 425 2/3 innings pitched.  He was placed on the disabled list on June 26, 2015 and missed the second half of the season.[/nextpage]

Signed as a non-drafted free agent in 2013, Eric Ruth can be compared to fellow Yankees prospect Jaron Long. Both don’t throw hard, instead relying on command and control to get batters out.  In 80 minor league games he owns a 15-9 record with a 3.17 ERA and 230 strike outs over 264 innings pitched.  This past season was his best season throwing 146 1/3 innings over 3 different levels including 2 games at Triple-A.[/nextpage]

The Yankees signed Simon De La Rosa as an International free agent in 2013 and in 39 games as a professional he owns a 10-6 record with a 3.71 ERA and 180 strikeouts in 141 1/3 innings. He has worked 95 batters in his minor league career and this past season the 22-year old was 6-2 with a 3.71 ERA for the Pulaski Yankees.  He is one guy that could break out as a top prospect if he begins to locate his pitches better.  When the Yankees signed him Baseball America deemed him one of the possible sleepers in their IFA class and that is still very much the consensus.  De La Rosa is developing but has not yet taken that step to make the jump from sleeper to top prospect.[/nextpage]

A former second round draft pick and top prospect, Gosuke Katoh has had a tough time after jumping to the Charleston RiverDogs in 2014. After hitting .310 in 50 games in his professional debut in 2013 with the Gulf Coast Yankees the Yankees promoted him to Charleston in 2014 where he struggled, hitting just .222.  Katoh went back to the RiverDogs to start 2015 and continued to struggle, hitting just .161 in 39 games before being demoted to extended spring training. After being assigned to the Pulaski Yankees he was able to find his swing again, hitting .287 in 59 games in the Appalachian League.[/nextpage]

Drafted in the 11th round of the 2013 draft outfielder Kendall Coleman has had a tough time adjusting to professional caliber pitching, hitting just .217 in 76 games. Coleman is a corner outfielder with a below average arm and speed but the Yankees like him.[/nextpage]

The Yankees drafted Brody Koerner in the 17th round of the 2015 draft out of Clemson and the 22-year old was impressive in his first season. In 21 games between Rookie-level Pulaski and Class-A Charleston he allowed just 4 earned runs and earned a 3-1 record with a 1.23 ERA. He struck out 25, walked just 7 in 29 1/3 innings pitched picking up 8 saves in 9 chances.[/nextpage]