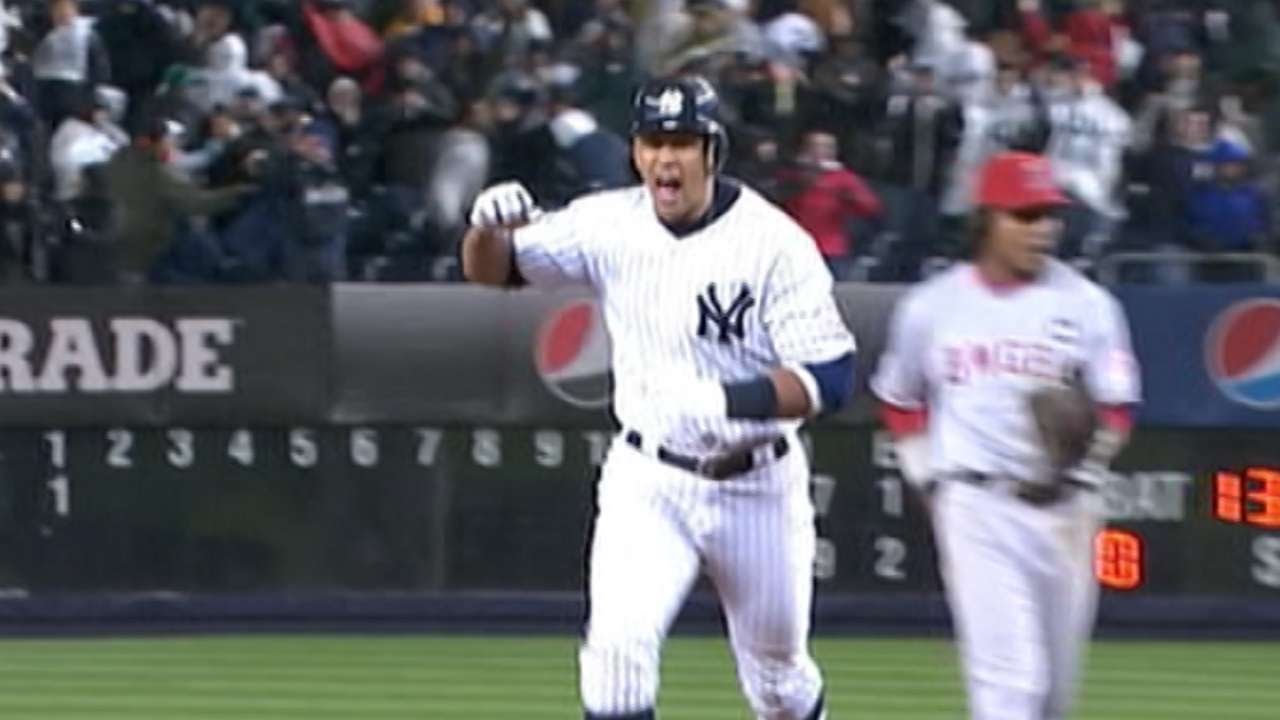 One thing we may start doing more of at Pinstriped Prospects is going back into the time machine a little bit. We all miss baseball. We all miss it because of the memories we have formed throughout our years of watching this beautiful game. That’s why, today, I want to go back in time. I want to look at probably the best Yankee game that I have been to, 2009 ALDS Game 2 between the New York Yankees and the Minnesota Twins.

I was 12 years old at this game, and it’s the first Yankee game that I can really remember start to finish that I was at. I even remember Reggie Jackson, Mr. October himself, coming out to throw the ceremonial first pitch and the whole stadium chanting “REG-GIE REG-GIE.” For how this game went, this was pretty fitting.

This game was also A.J Burnett’s first career playoff start as a New York Yankee. He would face off against Nick Blackburn, who was having a decent season. In 205.2 Innings Pitched he recorded a 4.03 ERA and was known as more of a junk-ball pitcher that was going to get you out on soft contact rather than strikeouts. His K/9 was just 4.29.

There wasn’t much action in this game until the top of the 4th inning with two outs. A.J Burnett hit two batters in a row, Delmon Young and Carlos Gomez. That brought up lefty Matt Tolbert to the plate, who smacked a first pitch fastball up the middle, which had appeared was going to give the Twins the lead. However, Carlos Gomez being the aggressive baserunner that he is, started rounding second as Nick Swisher fired the ball in from right field. Jeter corralled Swisher’s throw and turned to tag Gomez, and as that was happening Delmon Young was pulling up slowly into home. Because of that, the inning was over and Young’s run didn’t count. It was still 0-0 after three and a half innings.

Things Start to Heat Up

A few more scoreless innings later and we are in the top of the sixth inning with two outs, Brendan Harris at the plate, and a runner on second. The Yankees have looked incompetent against Blackburn all night, grounding out on swinging bunts and getting caught looking at nasty off-speed. Thus, every run was important.

On a 3-1 pitch Harris smacked a fastball to left-center field that Johnny Damon just came up short of hauling in. In retrospect, Burnett is lucky the ball didn’t leave the yard. A run scored and Harris pulled into 3rd. Burnett had to shift his focus to the next batter, and he would get Nick Punto to ground out softly to end the inning.

In the bottom half of the 6th the Yankees started making some noise. Jeter smacked a one out double to right center field and Damon followed that up with a walk. Blackburn got a long talking to before facing Mark Teixeira with two on and one out. I don’t remember this exact moment, but looking back at the film Tex had a 2-0 count. He got a 90 MPH fastball right over the middle that, off the bat, appeared gone over the right field fence. When I tell you this ball just hooked foul, it juuuuuuust hooked foul. Tex would find himself in a 3-2 count that same at-bat and ended it with a shallow popup. Two outs.

Then stepped to the plate was Alex Rodriguez. In A-Rod’s entire career with the Yankees to this point one thing was clear; he couldn’t come through in October. This very at-bat with two runners on and two outs in the bottom of the 6th inning down 1-0 was where it all flipped.

A-Rod ripped a 1-0 fastball on the ground and into left field, tying the game at one. You could hear the excitement and relief at the same time that A-Rod had came through. Fans were ready to boo him off the field. Nothing more would come of the inning, though, and no action would come until the top of the 8th inning with Phil Hughes on the mound

Hughes had worked himself into a Jam that found him stuck with runners on 1st and 3rd facing Nick Punto with two outs. Punto punched a breaking ball into Center Field, giving the Twins a late 2-1 lead. The very next batter, Denard Span, would follow up with a soft base hit of his own against the one and only Mariano Rivera, giving the Twins a more comfortable 3-1 lead.

Mariano would get out of that inning, the Yankees would go quietly in the 8th, Mariano got through the top of the 9th, and we ended up in the bottom of the 9th. Alex Rodriguez came to the plate with a runner on. Mark Teixiera led off the inning with a base hit to right field to set the stage.

A-Rod worked the count to 3-1 and got a pitch he liked. A 94 mph, outer half Joe Nathan fastball got hit right back where it came from. A booming, majestic right-center field home run for Alex Rodriguez that gave birth to the first iconic moment at New Yankee Stadium. Prior to 2017, when it became consensus that the old soundtrack was back, Yankee Stadium had always had a bad rap as not being as loud as the old place.

I can say with 100 percent certainty that this moment matched any at the old stadium. I remember just looking around at the 50,000 fans in absolute awe of how crazy everyone was going. Grown men dog-piling on top of one another, beer flying everywhere. It was chaos and the Yankees hadn’t even won the game yet. What made the moment even more special was that it was A-Rod’s first “moment” in the playoffs as a New York Yankee. People had been waiting years for something like this out of him in October, and we finally got it. There’s a bunch of great videos on Youtube of this home run, but this one takes the cake.

The game was far from over, though, even with an iconic moment in our back pocket. The crowd was still buzzing for the entire half inning. Nonetheless, other than Nick Swisher just missing a walk-off home run with one out, nothing else happened in that bottom half. It was time for extra innings.

In the top of the 10th Alfredo Aceves would work into and out of a jam to get to the bottom half. Jorge Posada would lead off the bottom of the 10th with a one-out single into center. Brett Gardner then came on to pinch run for him. Gardner stole second base on a 2-0 count, and then two pitches later Joe Nathan would try to pick him off, but sailed the throw into center field instead. Gardner scampered to third and with one out and a man on third Derek Jeter had a golden opportunity to win the game.

Jeter would walk, Nathan got replaced with Jose Mijares, and Johnny Damon stepped to the plate. On a 3-2 count Damon hit a line drive right at the shortstop Cabrera. Gardner got caught not freezing on the line drive, and the inning was over.

Just a Little Bit of Luck

Damaso Marte would come in to pitch the top of the 11th inning. This is where things got really interesting. Joe Mauer was the lead off batter. He hit a fly ball down the left field line that bounced into the crowd and was called foul.

In 2019, Mauer would have had himself a ground-rule double after review. However the ball was called foul and the Yankees wouldn’t suffer from a leadoff double. Mauer would still end up singling to lead off the inning, though. Marte would then give up a base hit to Jason Kubel, which may have otherise scored Mauer. David Robertson then came in to replace Marte, giving up a single to Michael Cuddyer. Bases loaded nobody out.

Delmon Young would come to the plate and line out sharply to first. One out. Carlos Gomez would then chop one to first. The drawn-in infield would nab the go ahead run at home with a force out. Two away. Robertson would then get Brendan Harris to fly out to center field. They don’t call Robertson Houdini for nothing.

The Walk-Off And Why We Love Baseball

Due up first in the bottom of the 11th inning was Mark Teixeira. This time, against Jose Mijares, he was batting from the right side. He would work the count to 2-1 and promptly smack a fastball down the left field line. The ball scraped the top of the fence and went over. Ballgame.

The game had gone from a sure loss to an exhilarating victory. Looking back on it, this feels like the game that propelled the Yankees to their most recent World Series. More importantly, I think it gave A-Rod the confidence he needed. Because of this game he was able to carry the Yankees with his bat the rest of that postseason. He was confident and you could tell.

As a young 12 year old Yankee Fan sitting in section 217 with my dad, this was and still is the best Yankee game I have ever been to. With sports on pause for now, going back in time like this gives us an opportunity to remember why we love this game so much. 50,000 fans going absolutely ballistic over a team they have loved their entire lives. We have no idea when the next time will be that we can experience something like that night. Thus it’s important to remember the times that we had in a pre-pandemic world. For now, we can only hope to soon be able to experience more moments like October 9, 2009.