The New York Yankees instructional league roster is now out, and it is a virtual “Who’s who” of prospects.  In total 53 players will be in Tampa for the first of the annual off-season leagues, six of them will be heading to Arizona for the Arizona Fall League.

Breaking down the roster, 23 of 53 players are pitchers; five are catchers, 15 infielders and 10 are outfielders.  They will be working with 20 coaches, not including coordinators and roving instructors. The roster is made up of 11 members of the 2018 draft class, 28 international players, two non-drafted free agents, 12 draftees from other years.

Several prospects participating in the instructional league are recovering from injuries that cost them their 2018 seasons.  Among them are pitchers Jhony Brito and Glenn Otto, catcher Anthony Seigler and outfielder Brandon Lockridge. 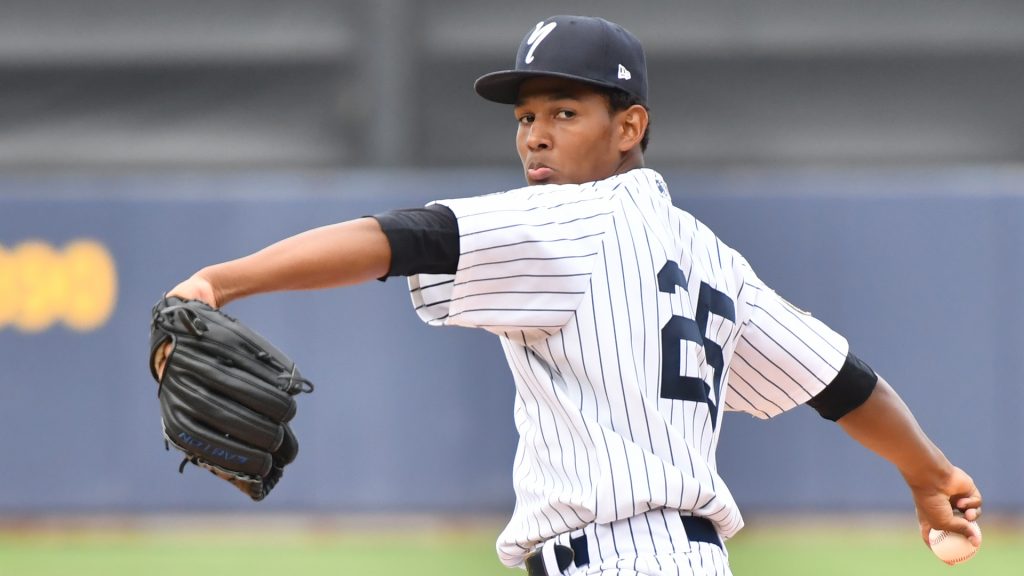 Jhony Brito missed all of 2018 rehabbing from an arm injury (Robert M. Pimpsner)

Jhony Brito missed all the 2018 season and most of the 2017 season after battling several arm injuries.  The right-hander last pitched on July 29, 2017, for the Staten Island Yankees, as part of a combined no-hitter.  He spent most of the 2018 season rehabbing at the Yankees complex in the Dominican Republic before coming state-side this past month.

Otto, the Yankees fifth round in 2017 was shut down on April 18 after a blood clot was discovered in his shoulder.  He successfully underwent surgery to remove the clot but missed the rest of the 2018 season after pitching in just two games.

The 2018 first-round draft pick was having a solid debut season with both the Gulf Coast League Yankees and the Pulaski Yankees before being shut down due to a concussion.  In 24 games between the two-Rookie league affiliates, he hit .269/.379/.342.

Brandon Lockridge’s season was cut short after July 31, 2018, due to a torn UCL in his left thumb that required surgery.  Lockridge suffered the injury in one of his early games in Staten Island but played through before finally being shut down.  His operation was successful, and he had a five-week rehab before being able to resume activities. In 26 games the 2018 fifth rounder hit .272/.378/.444. 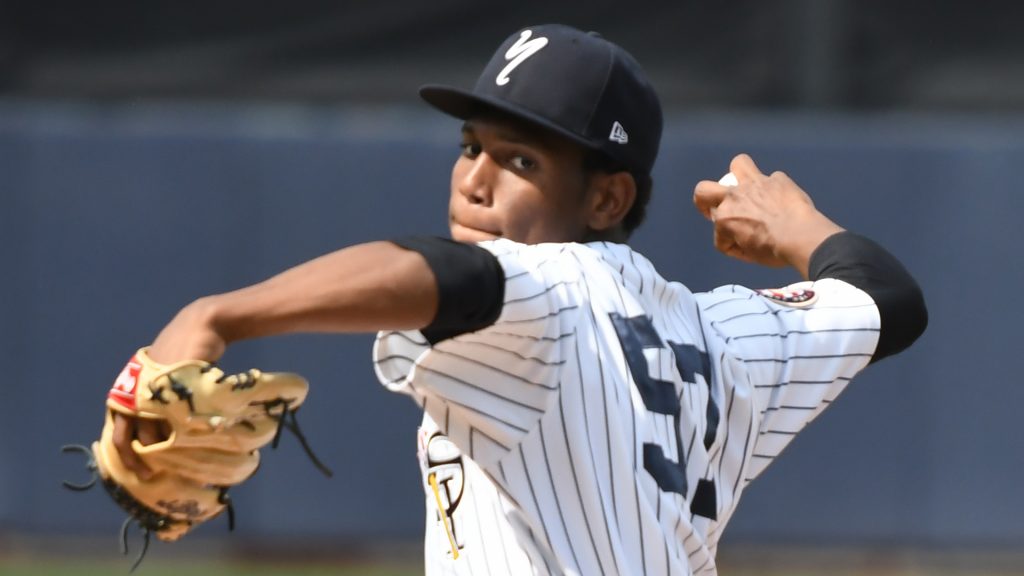 Contreras made a name for himself on the prospect circuit in 2018.  His fastball jumped from being around 88-90 miles per hour as an amateur to hit as high as 98 this past season with the Staten Island Yankees and Charleston RiverDogs.

Medina had a somewhat disappointing season in 2018, repeating the Appalachian League where he was 1-3 with a 6.25 ERA and 46 walks in 36 innings pitched.  While his velocity has been impressive, he is struggling with command as evident by his walk totals for the season.

Garcia is another prospect that made a big name for himself in 2018, starting the season in Charleston with the RiverDogs, before ending it in Double-A with the Trenton Thunder.  The 19-year old is said to have spin rates that help his pitches play up.

Dermis Garcia is one of several players that are eligible for the Rule 5 draft this December. (Bryan Green)

In total 10 players on the instructional league roster are eligible for the annual Rule 5 draft in December.  A few, such as pitchers Jordan Foley and Anderson Severino, qualify for the second year.

Among those who are eligible for the first time are pitchers Hobie Harris and Pedro Espinola, catchers Donny Sands and Jason Lopez, and infielders Dermis Garcia, Wilkerman Garcia, Brandon Wagner, and Nelson Gomez.

Below is the Yankees 2018 Instructional League schedule: