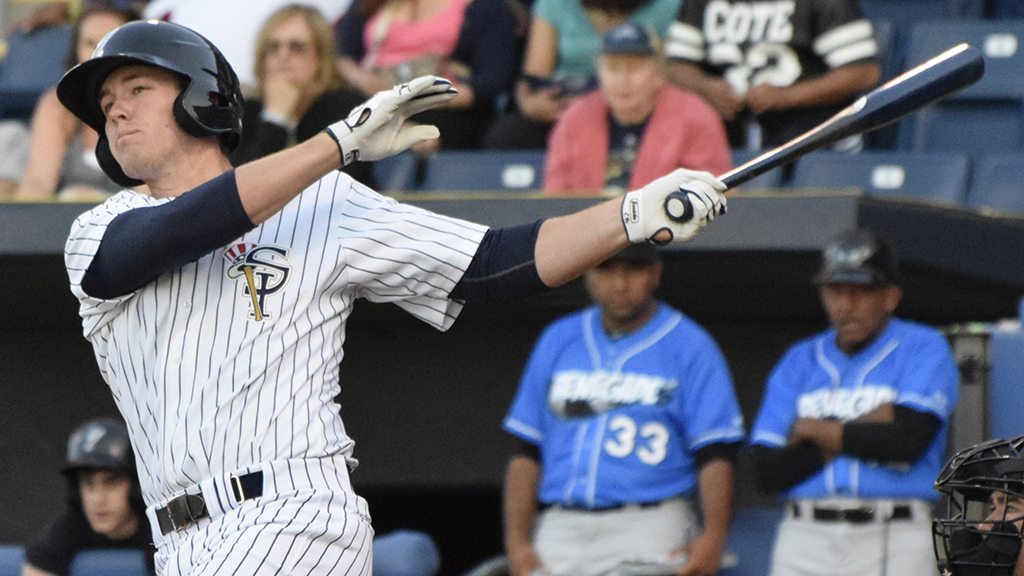 Yankees’ prospect Chris Breen is a versatile athlete whose hard work and dedication to the game, both offensively and defensively, continues to impress as he makes his journey through the organization.

The 6 foot 3 inch tall Breen, who was drafted in the 12th round of the 2012 MLB Draft, can play outfield, first base, and catcher but to him as long as he plays it does not matter which position he takes, “I prefer outfield over first base simply because I feel like I am able to showcase my athleticism more in the outfield. Plus, there are three outfield positions and only one first base position. Ultimately, it really does not matter to me though. I will play anywhere that will get me in the lineup and that can help me team win.”

The 20 year old began playing baseball at four years old as well as spending his childhood playing multiple sports including football. “My dad built me a tee and I had a pitch-back net that I would throw the ball into and it would bounce back. I always trained hard and it was my goal to become a professional baseball player ever since I could remember.”

But, during high school he wasn’t seeing the interest from college scouts like he had hoped. “I played summer travel ball for a top team from the beginning of my high school career and was a top performer each summer. Entering my senior year of high school I was discouraged that I had not really gotten any legitimate baseball scholarship offers so I decided to give up football to solely focus on baseball and adding strength. I committed to play at a nearby community college but it was not until the middle of senior year when I realized that professional baseball might not be an option.”

So, as Breen does, he continued to work hard to gain the attention of professional scouts. “After playing with another guy on my high school team, Jon Sandfort [who was drafted by the Pittsburgh Pirates in the same draft] and having a good year in front of all the scouts that came to watch him pitch, I got a chance to go to the State All-Star game for Florida high schools. It was not until I had the weekend of my life, I actually was the MVP of the East Squad I was on, in front of so many scouts that I realized professional baseball would be an option right out of high school.”

Breen’s realization became a reality when he was drafted in June of 2012 and became a part of the 27-time World Champion New York Yankees. “Being drafted by such a historic franchise and taking a step closer towards one of your lifelong goals was a great feeling. No matter if you follow baseball or not, everybody knows the Yankees; it’s just a cool thing to be a part of.”

Breen’s first season of pro ball would come on the summer of 2012, just after signing with the Yankees, in the Gulf Coast Leagues where he maintained a .274 batting average along with 7 RBIs. He then returned to the GCL Yanks in 2013 where his batting average slipped a bit to .214 but racked up 5 homers and increased his RBI count to 34. Then, in 2014 Breen made the move to the New York Penn League where he spent the season with the Staten Island Yankees.

His power and athleticism help him while batting but, it’s his mindset at the plate that helps him the most, “I try to keep it simple as possible but always have a plan before I step in the box. Paying attention to the warm-up pitches and the hitters at-bats before me is the first key, trying to pick up tendencies or sequences. Next, is to evaluate the game situation. Then, from there it is simply just to try to square the ball up on the barrel of the bat unless the game calls from something a little more specific.”

With the game of baseball continuing to change and with the MLB testing the new “pace of play” rules, Breen says, “If the experiment is beneficial to the game for the players, coaches and fans, then I don’t see why it couldn’t be a good thing.”

Growing up in Winter Springs, Florida, Chris talks about his childhood memories of watching baseball, “The player I followed and was the biggest fan of when I was younger was Chipper Jones. He is from an area not far from where I grew up, so I became interested and followed his career. The team I grew up watching and was a fan of was the Atlanta Braves. The Braves games were always televised on TBS in our area so that was the team I had the most access to and always watched. Plus, the Braves Spring Training home is Wide World of Sports which is only about 45 minutes from my house.”

As Breen gets ready for the quickly approaching season he says that he just wants to “improve all around in both areas [either side of the ball]”. He continues with, “The offseason is a fun time for me because I really enjoy lifting weights, running and sticking to a good diet.” He mentions how staying focused and busy helps him stay ready all year long. Also in the offseason he says that in his free time he likes to “spend time with my younger brother and family. I also enjoy fishing, going to college football games and pretty much anything that involves being outside and playing sports.” He also mentions how he would love to further his education in the future and enjoys reading a few books a year.

So, as the season begins, what are Chris Breen’s goals? “My main goal is to continue to go out there and do whatever I have to do make a name for myself in baseball, while helping my team [wherever I am this year] try to win a championship. I set statistical goals every year pretty high. Some may call that ridiculous but that keeps me hungry and always working for something.”

And, he leaves you with this, “Realistically, all the awards and great stats don’t matter unless you make it to the “Bigs”, then, once you have achieved that a whole other set of goals present themselves.”