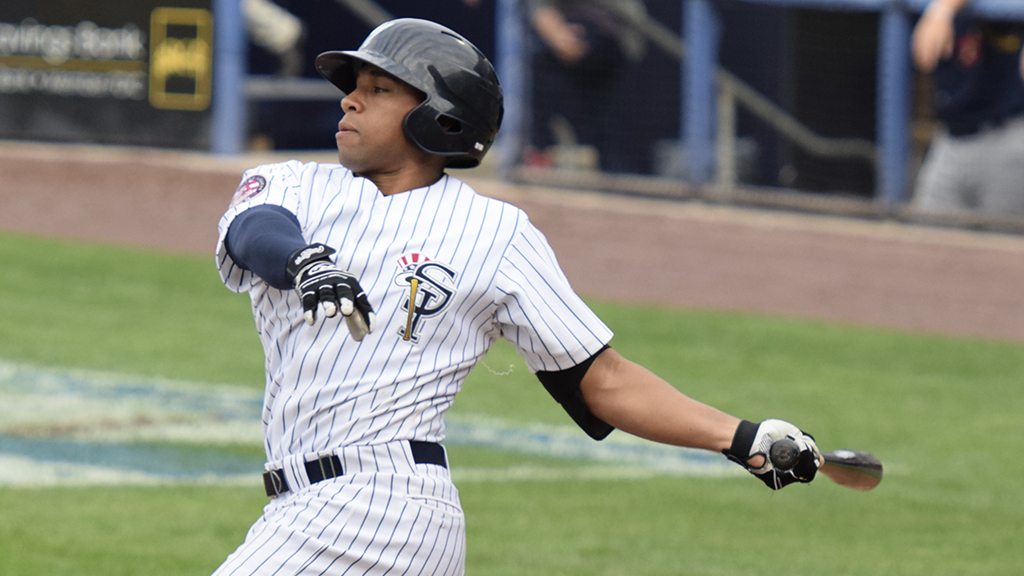 KJ Alexander had 3 hits in the game (Robert M Pimpsner)

AUBURN, NY – The bottom of the order all had multiple hits but the Staten Island Yankees bullpen failed to hold onto the lead as the Baby Bombers dropped the final game of a 3-game set to the Auburn Doubledays. However due to a Brooklyn loss earlier in the day the Yankees remain 2 games back in the division.

Auburn got the scoring going early on in the bottom of the first inning when they plated 2 runs off of Yankees starter Matt Borens. Borens went on to pitch 4 1/3 innings, allowing 6 runs, 5 earned, on 7 hits and 2 walks. He was followed by Brett Marks who pitched only 2/3 of an inning allowing 2 runs on 2 hits and walk.

Staten Island took the lead in the top of the second inning. Jhalan Jackson reached on a fielding error to start the inning, went to third on a single by Drew Bridges before Brandon Wagner singled to bring him home. KJ Alexander then tripled to clear the bases scoring both Bridges and Wagner. A Ryan Grill double brought home Alexander and the Yankees had a 4-2 lead.

After the Doubledays plated a third run in the bottom of the fourth inning the Baby Bombers added 3 runs to their total in the top of the fifth. With 2 outs on Brandon Wagner and KJ Alexander hit back-to-back singles to put men on the corners. A wild pitch by pitcher Luis Torres moved Alexander to second and allowed Wagner to score. Alexander came home when Ryan Krill double to left. Junior Valera then tripled to right to bring home Krill and give the Yankees a 7-3 lead.

However the Yankees could not hold onto that lead for much longer as in the bottom of the fifth the Auburn Doubledays would take the lead back for good. They plated 5 runs off Staten Island pitchers in that inning before going on to plate single runs in the seventh and eighth innings to give them the 10-7 victory.

Some good news in the game as the bottom of the Yankees order came alive. Brandon Wagner, Ryan Krill and Junior Valera all had 2 hits in the game while KJ Alexander contributed 3 hits. Jeff Hendrix and Drew Bridges also had hits while Kyle Holder was originally credited with hit but it was taken away by the official scorer.

The Staten Island Yankees are enjoying a rare off day in the NY-Penn League before returning home on Wednesday night to start a 3-game home and home series with the Brooklyn Cyclones.