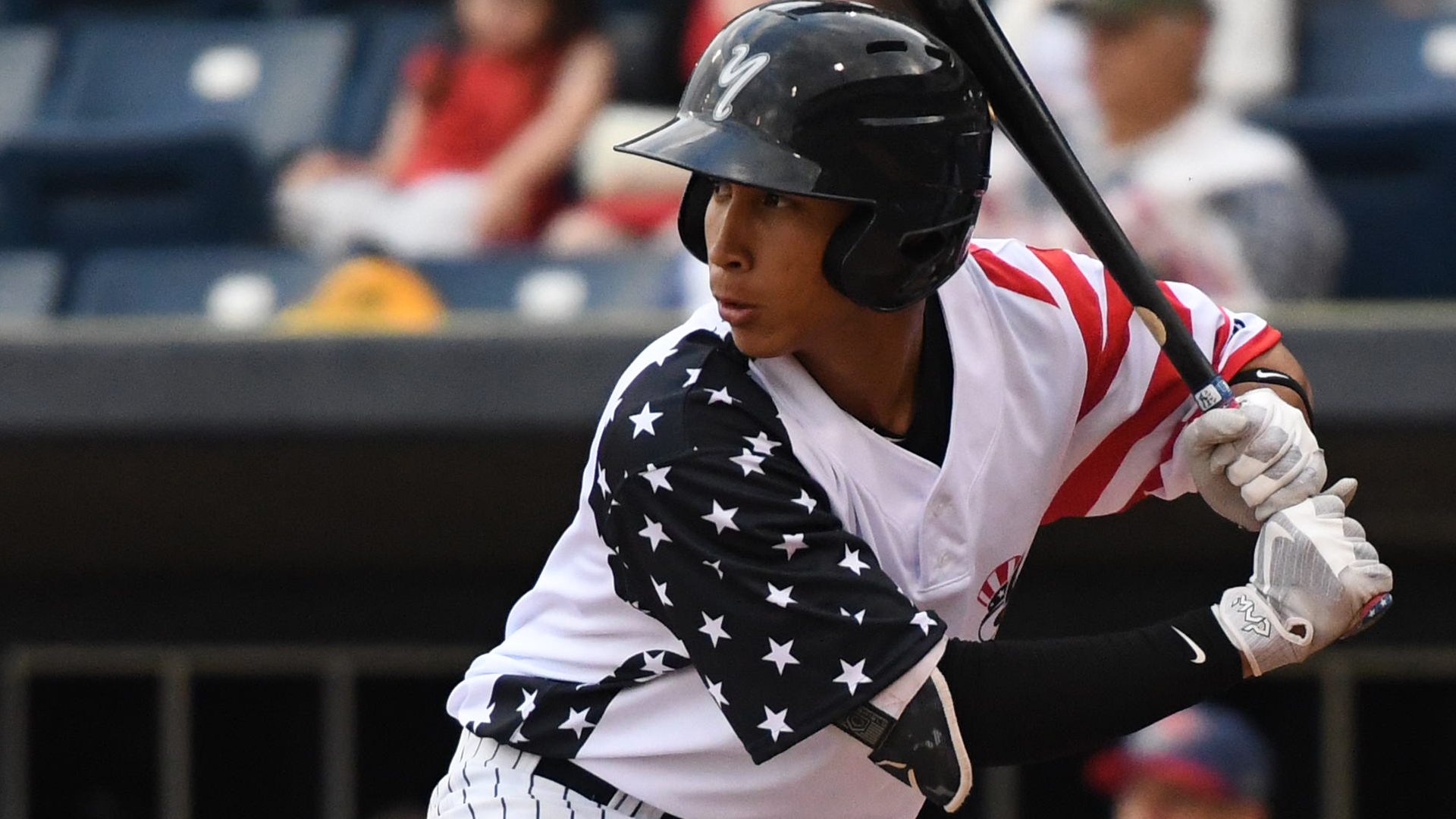 STATEN ISLAND, N.Y. – Statistical data can tell you a great deal about past performance, but it cannot always predict things to come. The Staten Island Yankees learned this lesson during an unexpected five-run outburst by the Hudson Valley Renegades in the top of the ninth inning to erase what looked like a sure victory. But they quickly rebounded when Oswaldo Cabrera singled home Nelson Gomez in the bottom of the inning for a 6-5 Independence Day walk-off win.

“We couldn’t have had a better guy out there in that situation,” Staten Island manager Julio Mosquera said of Cabrera. “He’s been swinging the bat really well with a good level to his swing, and he competes out there every day.”

Cabrera, who’s emerged into one of the most consistent hitters on the team, collected four RBIs on the evening, including a two-run double in the eighth inning to extend the Staten Island advantage to five at the time. He also singled home a run in a three-run second inning to open the scoring for his team. His impact in the leadoff spot helps him build confidence while having the support of his teammates.

“I was really prepared for the moment,” Cabrera said. I told my teammate Wilkerman Garcia that ‘my day is coming today. This is my opportunity. When I stepped into the batter’s box, I was comfortable. I knew where I wanted to be. Confidence builds throughout the game, so it definitely helped me.”

Cabrera’s opportunity came after Hudson Valley sent nine men to the plate in the top of the ninth inning, walking four times against relievers Alex Bisacca and Braden Bristo. A Bill Pujols walk with the bases loaded ended a streak of 25 consecutive scoreless innings, spanning three games and a bid for back-to-back shutouts. With two outs in the inning, first baseman Matt Dacey tripled home two runs to even the score and took advantage of the bullpen’s struggles.

“Those things will happen sometimes,” Mosquera explains. “You are going to have one of those days where pitchers are going to walk guys. We have been pretty good lately, so those days are coming. It didn’t really faze me that much because you have to come back and compete.” 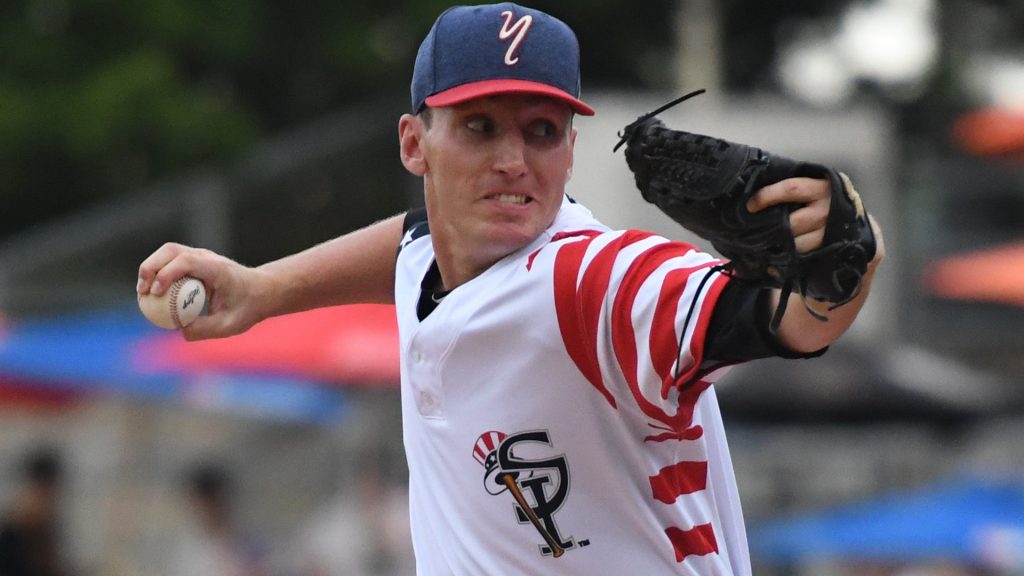 Third-round pick Trevor Stephan started the game for Staten Island, making his first appearance in the New York-Penn League after debuting professionally with the Gulf Coast Yankees at the end of June. The Arkansas product quickly asserted himself to his new surroundings, striking out two in the first inning. He also had the help of his catcher Manny Argomaniz, who threw out Emilio Gustave attempting to swipe second base following a walk. Mixing his fastball, slider, and changeup, Stephan racked up four strikeouts and allowed just two hits and one walk in 2.2 innings.

“I’m a firm believer in watching the guys pitch and letting them show you who they are,” Mosquera said. “He showed me he likes to have the ball in his hand and that he is a competitor. He’s got good stuff, and that’s why he is a top round pick for us, and the college experience helps because he played competitive baseball in his school days and it helps him a lot.”

Drew Finley took the ball in relief following Stephan and Christian Morris and had a strong performance in his first game at Richmond County Bank Ballpark for nearly twelve months, throwing 76 pitches in 4.1 scoreless innings, while striking out three. He also relied on his defense to aid him through jams.

A diving stop by Oswaldo Cabrera at second base in the sixth inning helped Finley preserve a three-run lead and worked his way back to fan catcher Rafelin Lorenzo with the bases loaded to end the threat. For Finley, it was his strongest effort in his comeback from a flexor tendon injury in his right elbow. 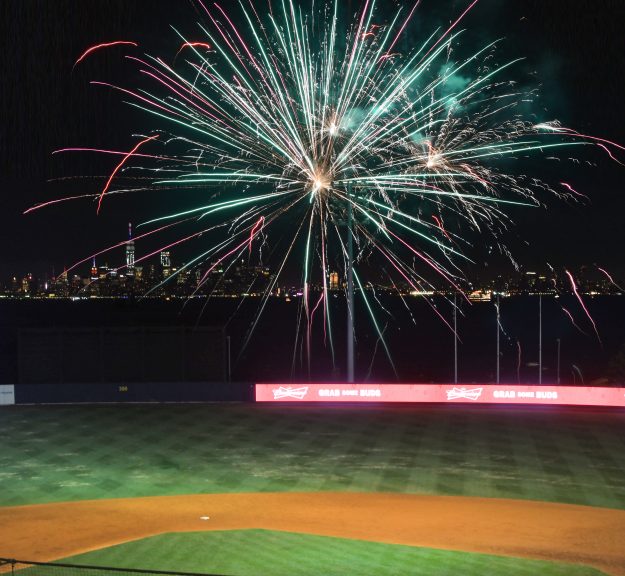 After the game the players and fans were treated to a spectacular fireworks display with the skyline as the backdrop. (Robert M. Pimpsner)

“He came out, and he was working. That’s a good thing. When you come out in a game like that, and you also have the lead he did, it helps a lot. It gives him a lot more confidence to compete. He was able to attack the strike zone a little bit more, and I guess it’s a good thing when you start an outing with that lead.”

Following their dramatic victory on July 4, Staten Island holds an 11-2 record and matches the mark set during the 2016 season when the club started similarly and parlayed their quick start into qualifying for the New York-Penn League Wild Card. Despite their difficulties in the ninth inning on Tuesday, the team ranks among the league leaders in ERA and rely heavily on their starting pitching to give them an opportunity to win. The venue will shift to Wappingers Falls for the second game of the series with Juan De Paula taking the hill for Staten Island.