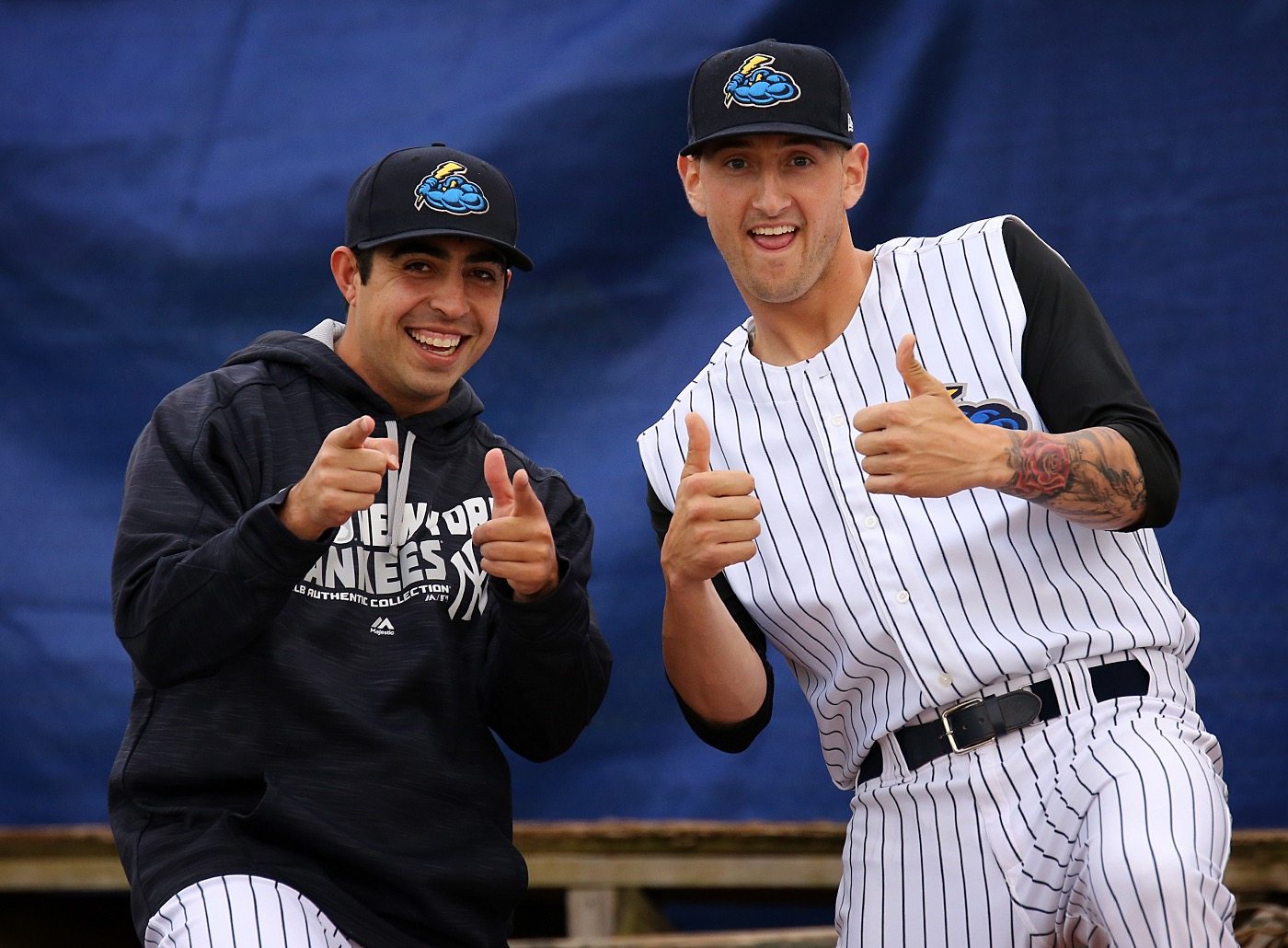 Daniel Camarena. left, who is 4-0 with Trenton, has fun with former Thunder pitcher David Kubiak. (Photo by Martin Griff)

ERIE, PA – The Trenton Thunder recorded a season-high 15 hits at Jerry Uht Park in a 7-4 win over the Erie SeaWolves Friday night.

Eight of the nine men in the Thunder lineup recorded a hit in the ballgame, including seven-of-nine with two-hit nights. The offense started late, but it erased a 1-0 deficit in the 6th inning as Michael O’Neill ignited the offense with a leadoff triple in the inning. With the infield drawn in for Erie, Cito Culver bashed a groundball single off a dive of the shortstop Casey Frawley to tie the game. Later in the inning, Culver scored on an RBI single from Sebastian Valle.

The game remained 2-1 in favor of the Thunder with Daniel Camarena tossing another scoreless inning in the bottom of the 6th. With two on and two outs in the top of the 7th inning against Erie starting pitcher Josh Turley, Tyler Wade worked an eight-pitch walk to load the bases and force Turley from the game after 101 pitches. Joe Mantiply entered out of the bullpen and the first pitch he offered to Dustin Fowler was ripped the other way for an opposite-field double, clearing the bases for a 5-1 lead.

Camarena allowed a run in the 4th inning when Connor Harrell took him deep after the Thunder lefty had retired the first 11 men he faced in the ballgame. The southpaw did not allow another run until a second solo home run was hit off of him in the bottom of the 7th inning by Drew Longley, bringing the SeaWolves back to within three runs at 5-2.

The Thunder padded the lead in the top of the 8th inning with a pair of runs, before Alex Smith entered out of the bullpen for the final six outs. After a scoreless 8th inning, the SeaWolves scored twice in the 9th inning but never brought the tying run to the plate in the inning.

The Thunder and SeaWolves return to action Saturday for a doubleheader. First pitch of Game 1 is scheduled for 4:35 p.m. at Jerry Uht Park. Coverage can be heard on 91.3 FM WTSR and online at www.trentonthunder.com.