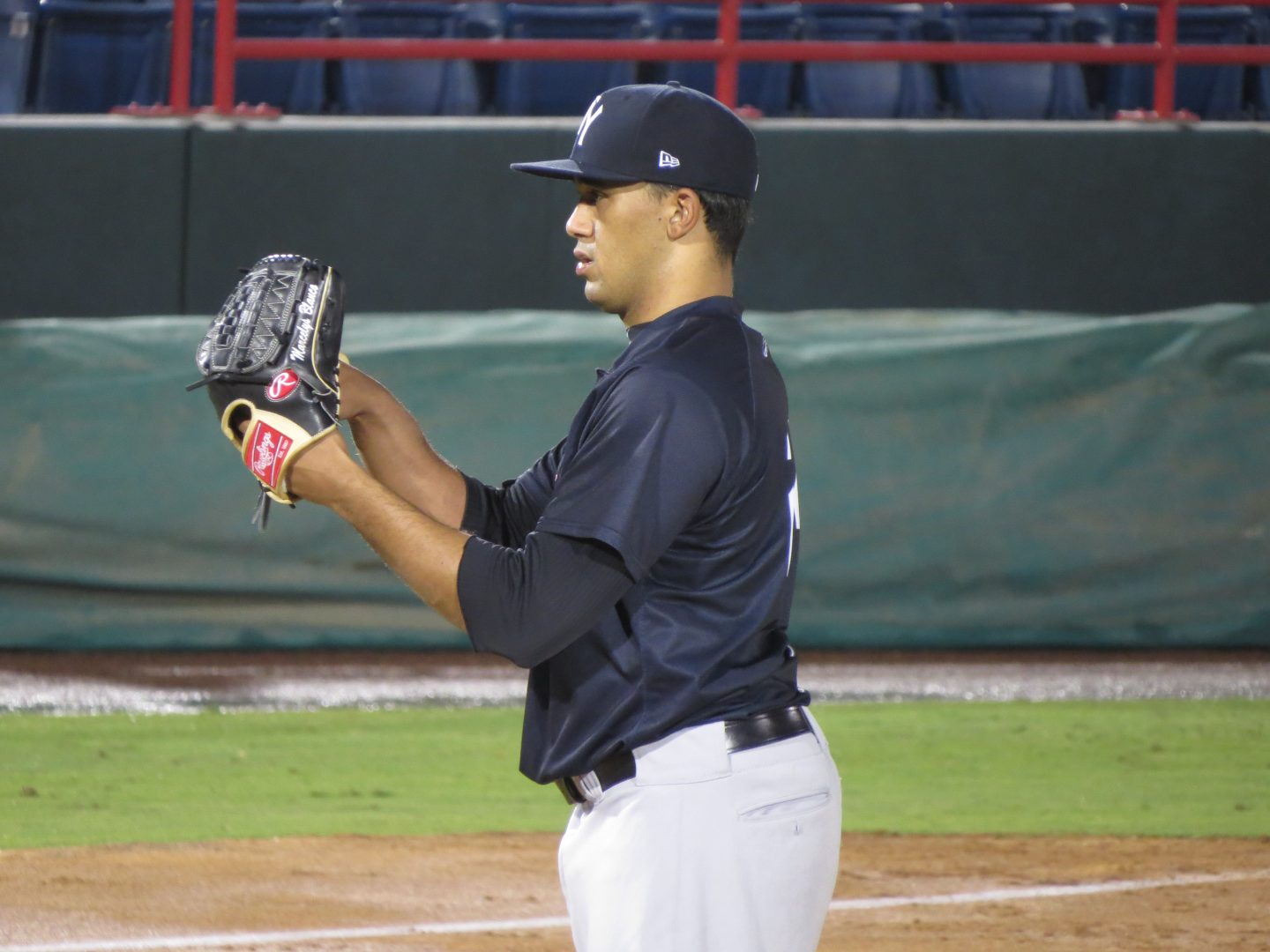 Right-hander Vicente Campos is throwing strikes with all his pitches.

TRENTON, NJ – Back on January 23, 2012, the Yankees and Seattle Mariners made a trade that seemed to be star-crossed.

The Bronx Bombers sent then-touted catching prospect Jesus Montero and right-handed pitcher Hector Noesi, who had shown potential in the minors, to the Great Northwest for right-handed pitchers Michael Pineda and Jose Campos, as he was then known. Montero is in the Toronto system, Noesi in South Korea after faltering in the majors. Pineda, of course, has been wildly inconsistent with the Yankees.

And when Vicente (nee Jose) Campos missed the entire 2014 season due to Tommy John Surgery, it looked like this trade night go down in history as a total wash. Campos, by himself, has changed that perception.

The 6-foot 3, 230-pound, 23-year-old native of La Guaira, Venezuela, is coming off a seven-inning, complete-game shutout in a 3-0 Trenton victory at Bowie Wednesday evening.

“I must admit, I chuckled, like many others, when I thought of this trade,” said a scout from a National League West team. “I’ve seen Campos pitch twice this season. The Yankees have something there.

“He is past surgery and looks great.”

Campos, so far, is throwing a 95 mph fastball, mixed with a curve and change that are improving rapidly. He is not afraid to pitch to contact and seems to relish challenging the hitters. The move from the Florida State League to the Eastern League has not impeded his progress. He is pitching better at Trenton than at Tampa.

“I know how important this Double-A level is to me,” said Campos. “I just want to continue to show I belong at this level and get better. I am not afraid to throw strikes and go after the hitters.”

That reasoning, according to Trenton pitching coach Jose Rosado, is why Campos is having success in the Eastern League without missing a beat.

“What we really like with Campos is he has the ability to throw strikes, on both sides of the plate,” said Rosado. “He has confidence in his pitches and challenges the hitters.

“The other difference is his secondary pitches have really improved. He throws them for strikes as well. Mixing those with his fastball the way he has gives opposing hitters a lot of problems. He has a great arm.”

While Campos feels his curve and change still need improvement, they have come a long way since he was first acquired by the Yankees. His secondary offerings, due to excellent command, are well on their way to becoming quality pitches.

“I really didn’t know that much about Campos since this is my first year with the Yankees,” said Thunder manager Bobby Mitchell. “He’s a great addition to our staff.”

The Yankees are thrilled not only with Campos’ progress, but his durability so far. He threw 87 innings in 2013 before his right elbow began acting up and led to surgery. With 85.1 so far in 2016, he will likely, without any other setbacks, throw in the 135-145 range, which would make for an excellent season on all counts.

Some scouts thought the Yankees got a steal with Campos in that January 2012 trade with Seattle. It does seem, after all that transpired with the four players involved in that swap, those thoughts now ring true.