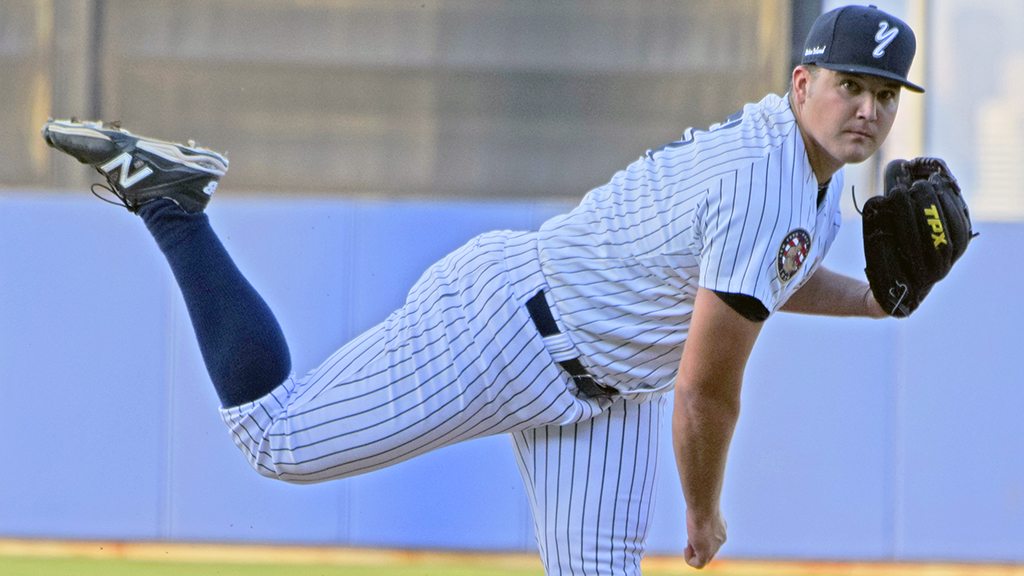 Sean Carley earned his second save of the season. (Robert M Pimpsner)

ABERDEEN, MD – Staten Island Yankees pitcher Sean Carley has found his roll with the Baby Bombers at the back of the bullpen.  In his second consecutive game the right-hander, that once drew comparisons to fictional pitcher Kenny Powers due to his look, earned the save.  It is only fitting that he is wearing the same #55 that Powers wore in the show “Eastbound and Down”.

Staten Island struck first in the ballgame, scoring their two runs in the top of the third inning.  Ryan Krill led off the inning with a ground ball double to right field and moved to second when Jeff Hendrix was hit by a pitch.  Brandon Wagner then grounded out to first to move both runners over.  Thairo Estrada was next at the plated and reached on a throwing error by Aberdeen third baseman Ronarsy Ledesma that allowed both Krill and Hendrix to score.

Aberdeen plated their lone run of the game in the bottom of the fourth when Steve Laurino homered off of Yankees starter Yoel Espinal.  Esponal pitched 3.1 innings and allowed just 1 run on 5 hits and a walk while striking out 3 Ironbirds hitters.  Chance Adams followed him on the mound and earned the win, pitching 2 innings, walking 3 and striking out 5 batters of the 9 batters he faced.  Mark Seyler came into the game in the 6th inning and allowed just a hit over 1 2/3 innings of work.

Carley came into the game in the 8th inning with a 1-run lead to maintain.  After getting Orioles first round pick D.J. Stewart to ground out he struck out two consecutive batters to end the inning.  He came back out for the 9th inning to close it down.  In the 9th inning he picked up his third strike out of the ballgame and set down the other two batters with a line out to right and a ground out to third to earn his second save.

Ryan Krill was the only Yankees batter with multiple hits, including a double and single.  Jeff Hendrix, Brandon Wagner, and Jake Hernandez accounted for the other Staten Island base hits.

The Staten Island Yankees and Aberdeen Ironbirds will meet in the rubber game of this series on Friday with Kolton Mahoney set to make his first professional start for the Baby Bombers. 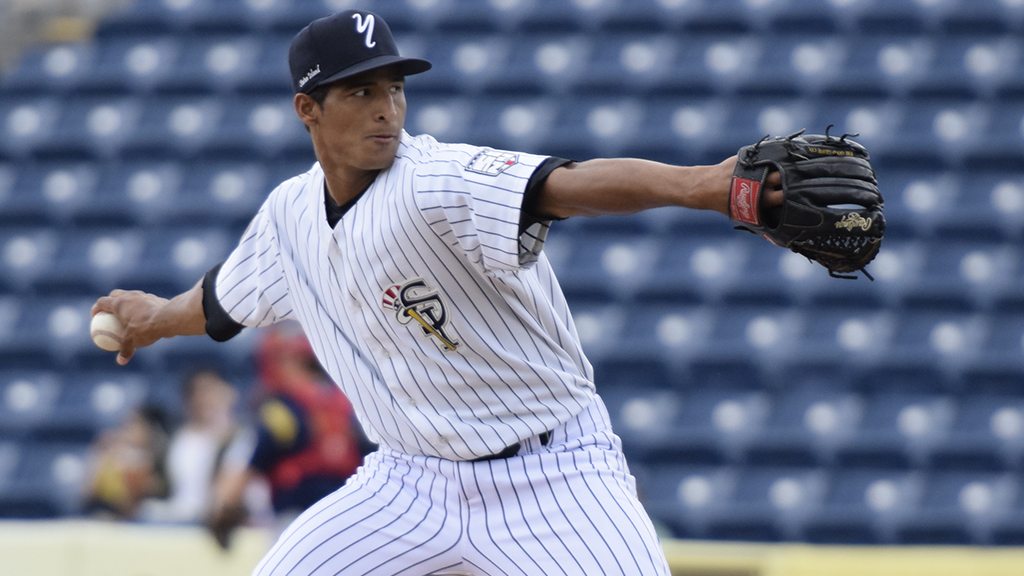 Right-handed pitcher Yoel Espinal is scheduled to get the start. (Robert M Pimpsner)

SI Yanks Look to Rebound with Espinal on the Hill

The Staten Island Yankees are looking to rebound from the loss they suffered at the hands of the Aberdeen IronBirds last night at Ripken Stadium.  The Yankees offense was unable to take advantage of opportunities with men on base and hope to not repeat that mistake tonight.

On the hill for the Baby Bombers will be 22-year old Yoel Espinal. Espinal a right-handed pitcher out of the Dominican Republic signed with the Yankees as a minor league free agent after spending a couple of seasons with the Tigers organization.

Yoel has appeared in 3 games for Staten Island, starting 1.  His last game he threw 3 2/3 innings and allowed 4 earned runs and struck out 4.  The appearance before that he went 3 1/3 and allowed 3 earned runs on 3 hits and in his first game he went 2 1/3 innings allowing a run.

Prior to joining the Staten Island Yankees Espinal pitched out of the bullpen for the Charleston Riverdogs where he was 4-2 with a 2.79 ERA in 20 games, striking out 47 in 38 1/3 innings.  Espinal possess a mid-90s fastball that could go up to 98 MPH at times.  This season he has sat between 94-95 MPH on the gun.