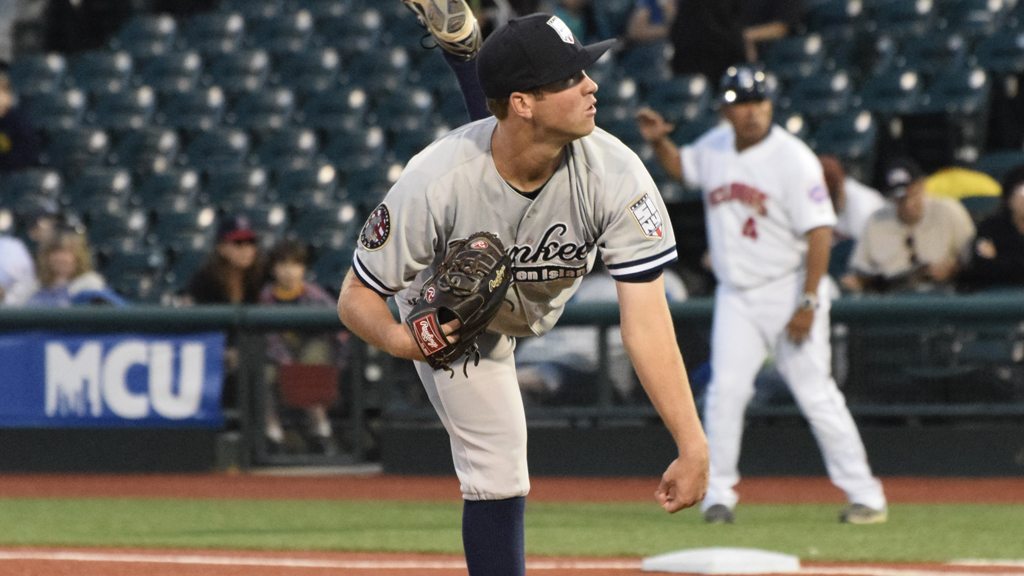 NORWICH, CT – The Staten Island Yankees move to .500 on the young NY-Penn League season thanks to a solid start by left-handed pitcher Ethan Carnes. Carnes, 23, was making his first professional start after spending the last two seasons pitching out of the bullpen.

You could not have asked for a better start from Ethan as he threw 78 pitches over 5 innings allowing one run on six hits and striking out four batters. The lone run came on a homerun in the first inning. His strong performance earned him the victory.

Staten Island jumped out to an early lead in the top of the first inning and never looked back. Junior Valera started it off with a walk then stole second. After a strike out two consecutive wild pitches moved to third and then ultimately home to plate the first run of the game. Thairo Estrada then walked, stole second and moved to third on a throwing error. After a second strike out Eduardo de Oleo walked to put runners at the corners. Estrada would then go on to score on the third wild pitch of the inning.

Shortstop Thairo Estrada added another run in the top of the third inning on a solo homerun to left field.

Staten Island would tack one two more runs in the sixth inning. Jhalan Jackson led off the sixth with a double to left, moved to third on a single by Drew Bridges and scored on a single by Ty McFarland. With runners at the corners Jeff Hendrix grounded into a force out at second base that brought Bridges home.

Chance Adams took the hill in the sixth inning and went on to throw an inning and two-thirds allowing 2 runs on 2 hits and striking out 2 batters.

The combination of Jhalan Jackson and Drew Bridges struck again in the top of the seventh with two outs Jackson singled to right then scored on a double by Bridges. The Yankees were not done scoring as the plated two more in the top of the eighth. With one out Jeff Hendrix worked a walk, moved to second on a throwing error on a pickoff attempt, and went to third on a single by Junior Valera. Valera then stole second. Zack Zehner then sent a sharp ground ball to right field for a double that brought home Hendrix and Valera.

Sean Carley then came in for an inning and a third, posting zeros in his second appearance of the season.

The bats did not go silent in the ninth as Eduardo de Oleo started off the inning with a single to short, moved to second when Jhalan Jackson walked and scored on a double to right by Drew Bridges. Ty McFarland then singled to center to bring home Jackson and give the Yankees their final run tally of 10 runs.

Josh Roeder pitched the ninth inning for the Yankees, striking out one in an 8-pitch appearance.

Tomorrow night is the second game of the series. Domingo Acevedo is scheduled to make the start for Staten Island.