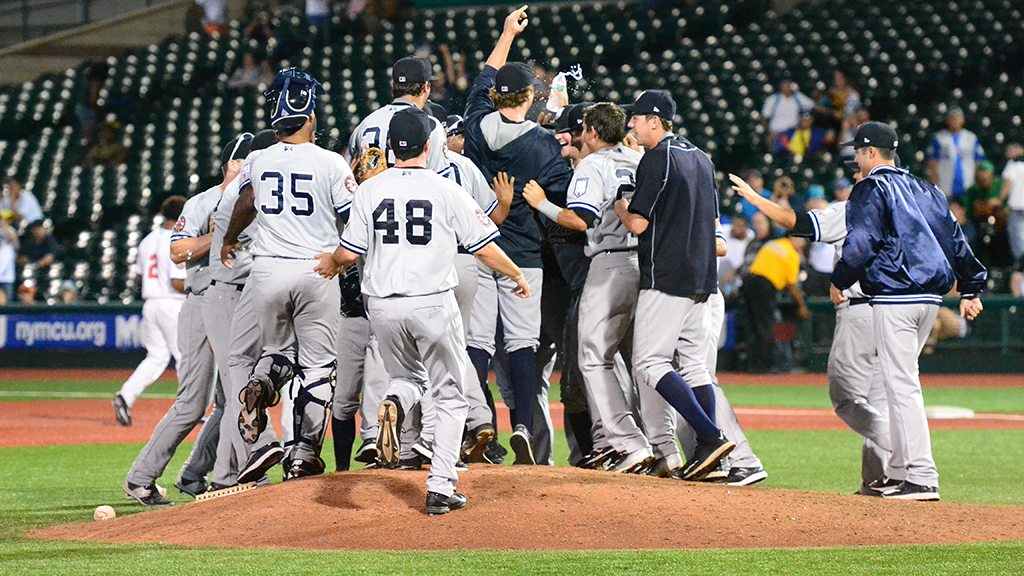 BROOKLYN, NY – For the tenth time in their history, the Staten Island Yankees will be heading to the NY-Penn League Playoffs after defeating the Brooklyn Cyclones 5-2 at MCU Park. The Yankees have gone undefeated at MCU Park this season, the first time in team history they won every game at the home of their rivals.

Staten Island has made 10 total trips to the playoffs in the team’s 16 year history, winning the McNamara Division title a total of 8 times and also winning the wild card twice. In total the Baby Bombers have 6 NY-Penn League Championships, the last one coming in 2011.

The Yankees scored 5 runs on 5 hits and took advantage of 3 Brooklyn errors to win the game.  They opened up the scoring in the top of the fourth inning. Trey Amburgey hit an infield single and moved to second on an errant throw by the Brooklyn shortstop.  Ryan Krill then walked, both runners moved up 90-feet on a wild pitch before Kevin Cornelius walked to load the bases.  Junior Valera struck out then Thairo Estrada grounded into a RBI force out with Cornelius out at second and Krill moving to third.  Eduardo de Oleo then cleared the bases with a line drive double to right field but was tagged out trying to stretch it into a triple.

Staten Island added single runs in the sixth and the seventh innings to further pad their lead.  Ryan Krill singled on a sharp ground ball that hit off the glove of the Brooklyn second baseman and into center field.  Krill was then erased on a force out by Kevin Cornelius before Junior Valera line a double to center for an RBI and giving the Yankees a 4-0 lead.

In the top of the seventh inning Eduardo de Oleo reached first on a missed catch error by the Brooklyn first baseman and then stole second and moved to third on a passed ball before scoring on a line drive double by Kyle Holder.

Derek Callahan earned his sixth win of the season, throwing 85 pitches over 5 1/3 innings, allowing 4 hits and striking out 5 batters.  He was lifted for Travis Hissong who allowed 2 runs on 2 hits and a walk in his lone inning of work.  Andre Del Bosque tossed 1/3 of an inning before Michael Schaub took the hill and earned his sixth save after 2 1/3 innings and 3 strike outs.

Kevin Cornelius made the defensive play of the game in the first inning with a diving catch on a line drive, stealing possible extra bases.

With the victory the Staten Island Yankees advance to the first round of the New York – Penn League playoffs with the first game on Wednesday night at the Richmond County Bank Ballpark.  James Kaprielian will make the start in game one of the playoffs and Domingo Acevedo will start game two.  If the series goes to game three Luis Cedeno will start.