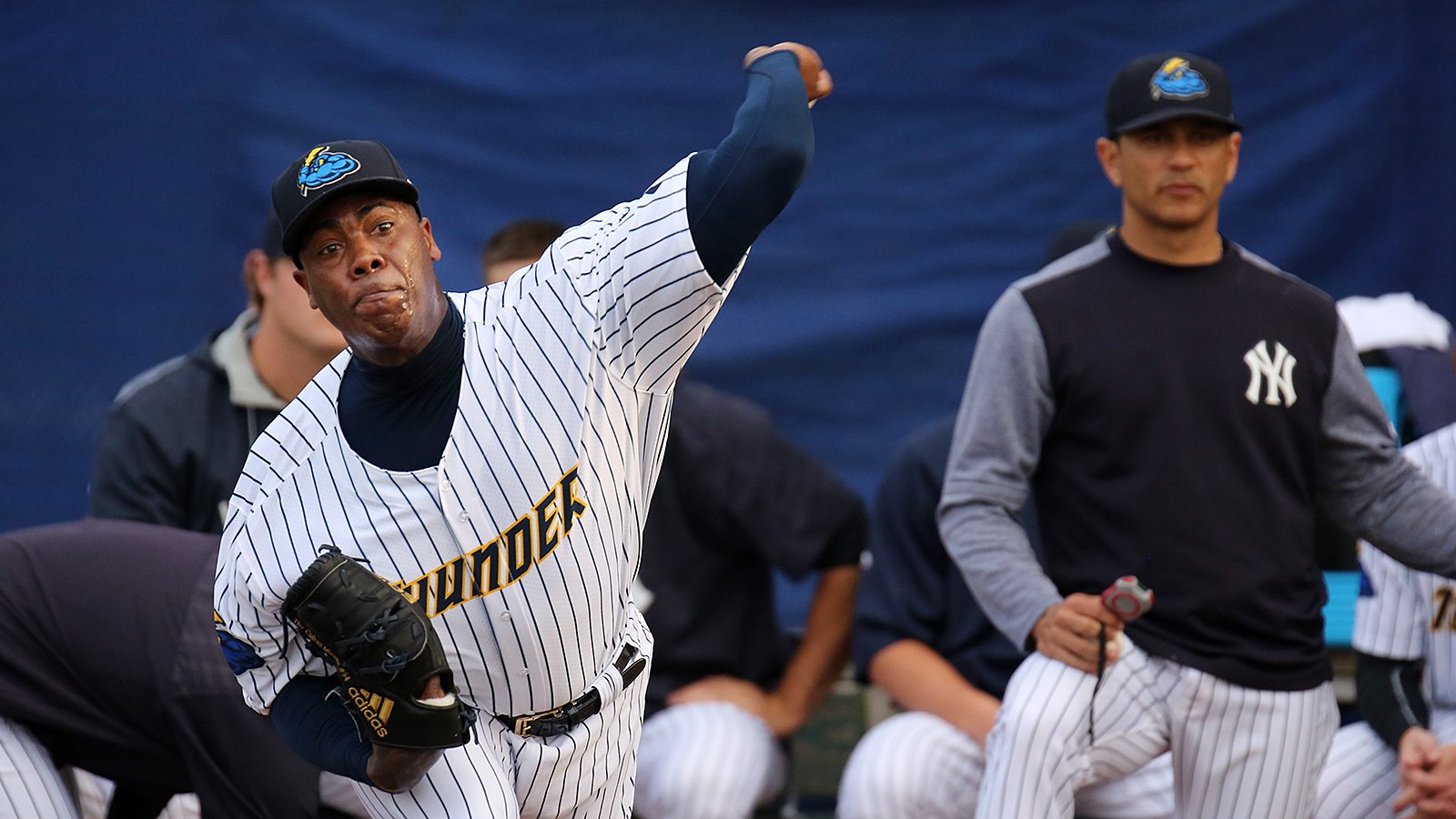 TRENTON – Yankees closer Aroldis Chapman toed the rubber for the Thunder on Friday night at ARM & HAMMER Park in what would prove to be his first and only rehab outing.

The Bombers placed their closer on the DL on May 14 with left rotator cuff inflammation after he converted seven of his eight save chances in the early juncture of the season.

As the team has watched their bullpen lose games on three consecutive nights, the need for an impact arm in the back end of the pen is suddenly glaring. 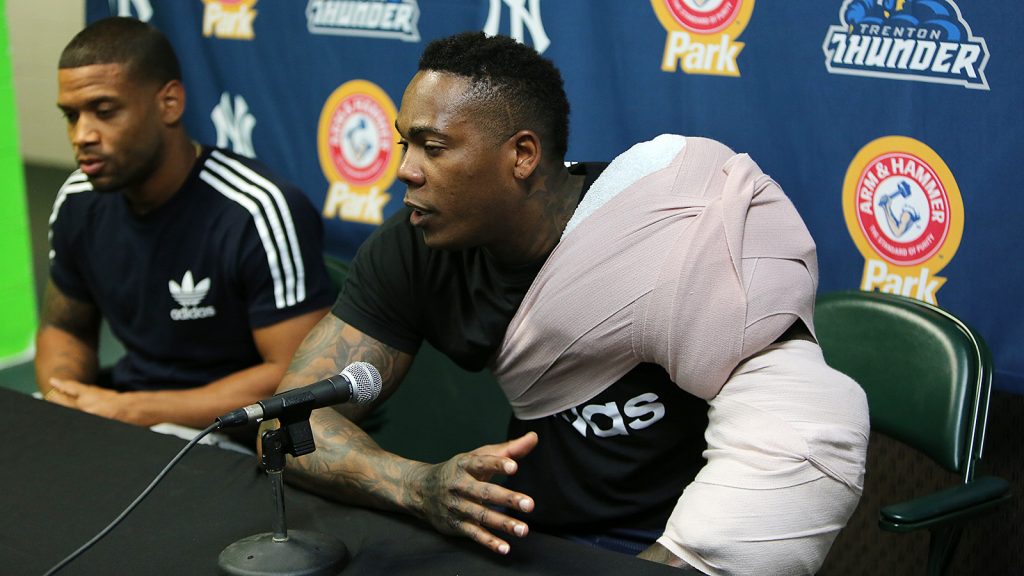 New York Yankee southpaw Aroldis Chapman during a press conference after a rehabilitation assignment with the Trenton Thunder on Friday, June 16, 2017. (Martin Griff)

Slated to pitch one inning for Trenton, Chapman was wild and struggled commanding the strike zone in his start. The 29-year old left-hander threw 20 pitches, just nine for strikes before Manager Bobby Mitchell pulled him with two outs in the frame.

Chapman walked two batters and threw two wild pitches that allowed Erie to plate a first inning run without putting the ball in play. While the command was not there for the four-time All-Star, the signature velocity was present as evident in his two strikeouts, both of which were picked up on 100+ mph fastballs. 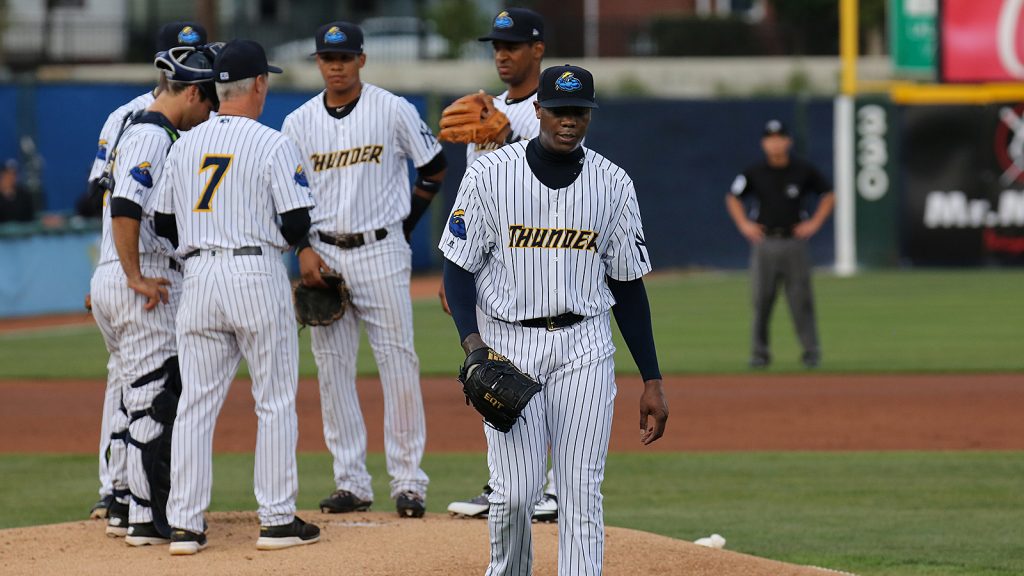 Following his outing, Chapman admitted that his control was not where he wanted to be, but felt healthy and ready to rejoin his team in Oakland this weekend.

Chapman added, “”It feels good to get reunited with the team. When you’re up there in The Show, all of the emotion and all of that is a little different. I feel like I am ready to be up there and help my team…Right now, the plan is to be activated Sunday.” 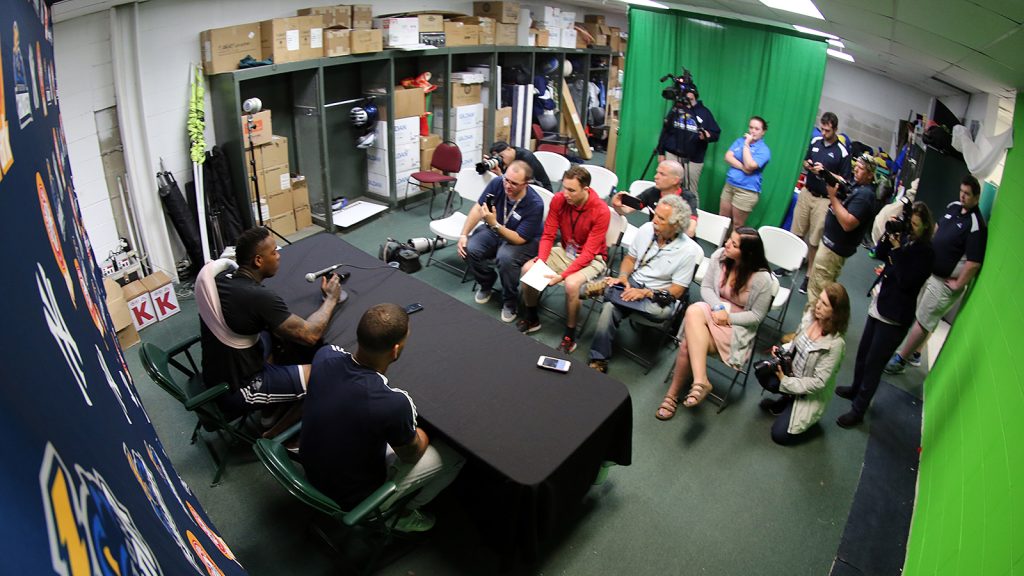 New York Yankee southpaw Aroldis Chapman during a press conference after a rehabilitation assignment with the Trenton Thunder on Friday, June 16, 2017. (Martin Griff)

The Yankees dealt Chapman to the Chicago Cubs last July in exchange for Gleyber Torres, Billy McKinney, Rashad Crawford and Adam Warren. The flame-throwing southpaw aided the Cubs in capturing their first World Series title since 1908 before inking a record five-year, $86 million pact this past winter.