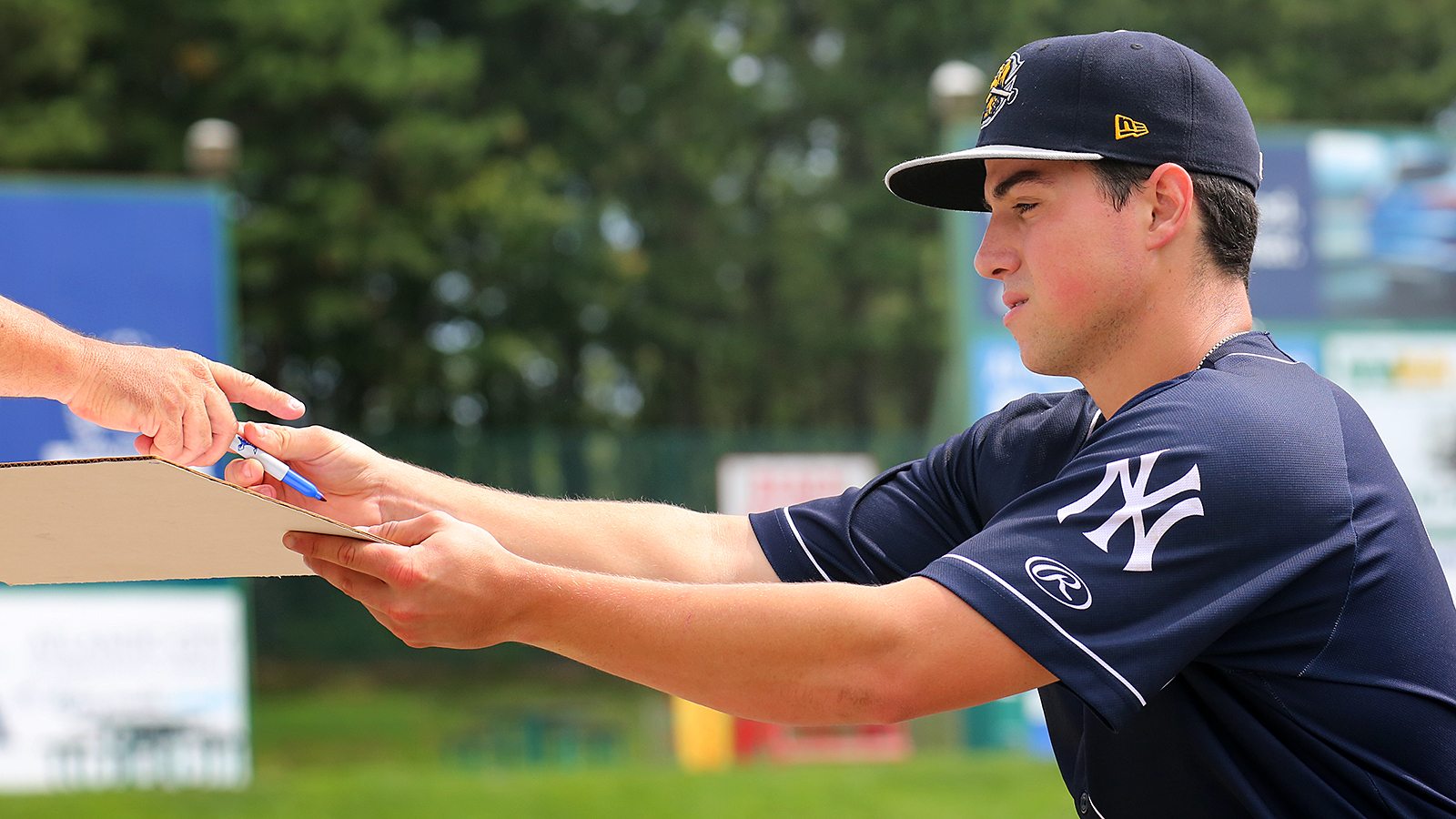 Charleston RiverDogs infielder Mandy Alvarez before a game against the Lakewood BlueClaws in Lakewood, NJ on July 17, 2017 (Martin Griff)

Back in January, the New York Yankees announced they were assigning Patrick Osborn to be the manager of the Low-A South Atlantic League Charleston RiverDogs, replacing previous manager Luis Dorante, who was assigned to Rookie level Appalachian League Pulaski.

Osborn came in with a .650 winning percentage in his four years of managing in the New York Yankees minor league system. To add to that, Osborn had guided his teams to the playoffs in all six years of his managerial career when adding in his first two years with the independent Southern Maryland Blue Crabs. All of those factors were a harbinger of things to come for the 2017 Charleston RiverDogs.

When the RiverDogs broke camp in Tampa and headed north, the roster was comprised of versatile and talented players. Five RiverDogs were rated in the top 30 of Yankees prospects per MLB.com – Blake Rutherford, Estevan Florial, Albert Abreu, Freicer Perez and Donny Sands. Diego Castillo, Angel Aguilar and Oswaldo Cabrera all could play second, third and shortstop. Hoy Park started most nights at either short or second. Rutherford and Florial would trade off playing center field playing along side Isiah Gilliam. 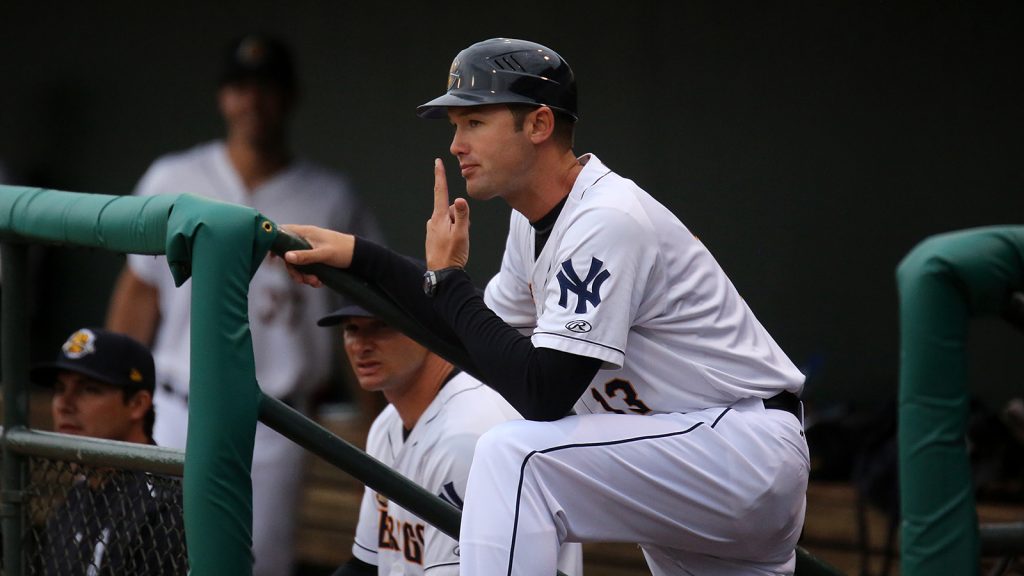 Charleston RiverDogs manager Patrick Osborn during a game against the Lakewood BlueClaws at Joseph P. Riley, Jr. Park in Charleston, SC on Thursday, May 4, 2017. (Martin Griff)

Abreu and Perez anchored what was initially a six-man starting rotation that also included Nick Green, Nick Nelson, Jio Orozco and Brian Keller. The bullpen, which would be the most consistent part of the team all season, included David Sosebee, Phillip Diehl, Garrett Mundell, Anyelo Gomez, Adonis Rosa and Hobie Harris.

During the first half of the season, three RiverDogs would earn promotions to the Florida State League High-A Tampa Yankees. Albert Abreu was the first Dog called up after three starts. He pitched to a 1.84 ERA in 14.2 innings allowing just nine hits and only three runs, which were all earned. He struck out 22 batters while only walking three. Abreu would 100 miles per hour on the radar gun.

The second RiverDog to earn the call from Tampa was closer Anyelo Gomez. In 10 games in Charleston, Gomez saved seven games, pitching 14 innings with a 1.93 ERA. He struck out 23 batters allowing just four walks. Gomez would continue to pitch strong at Tampa earning call ups to Double-A Trenton and one appearance with Triple-A Scranton/Wilkes-Barre. 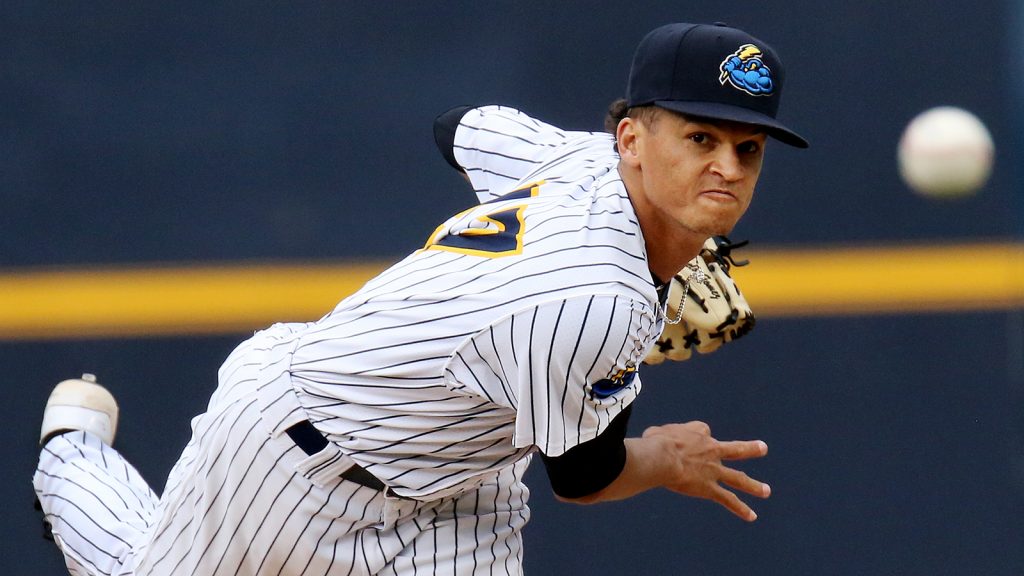 Raynel Espinal, who started off the year in extended spring training, would be the next pitcher sent up to Tampa after pitching to a 2-1 record with a 1.16 ERA. In 10 appearances out of the bullpen, Espinal struck out 44 in 38 and two-thirds innings, giving up 22 hits. His WHIP with Charleston was an impressive 0.67. Espinal would jump two rungs in the system ending up pitching nine games for Trenton at the end of 2017. 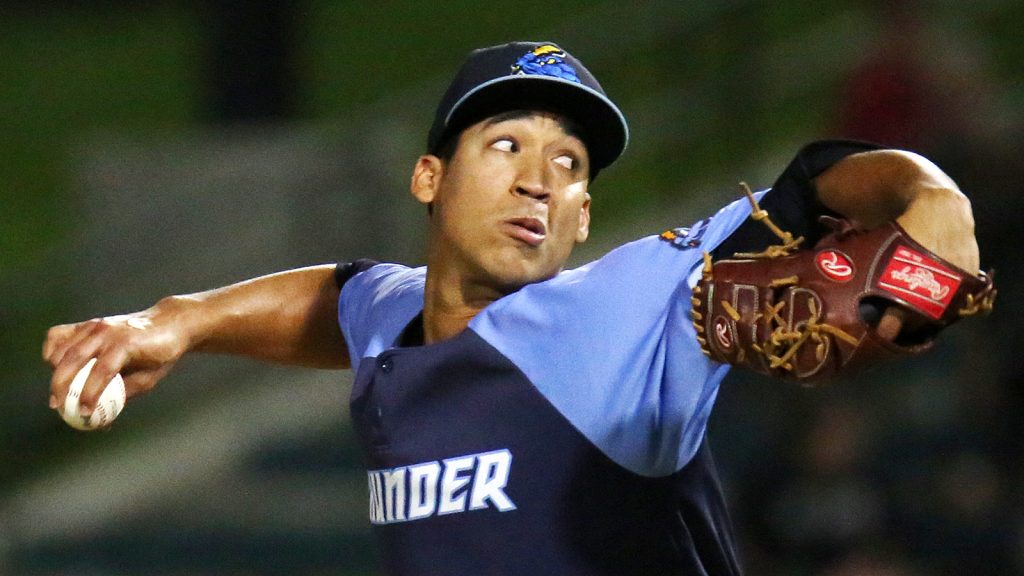 The bullpen would be the strength of the pitching staff, picking up for the starting rotation, which had trouble at times getting deep into games. The bullpen pitched to a 1.98 ERA in 509 and one-third innings pitched. The pitching staff amassed 1252 strikeouts, which broke the franchise record set in 2016 of 1248. The players attributed the success of the staff to second year pitching coach Justin Pope. Garrett Mundell had this to say about Pope in June, “Justin Pope, Popey is one of my best friends. He’s helped me a ton on the field, off the field with baseball, with life. He’s just one of those people that you have in your life that God puts him there for you. He’s just a good person, a good dude. He makes everyone better.” 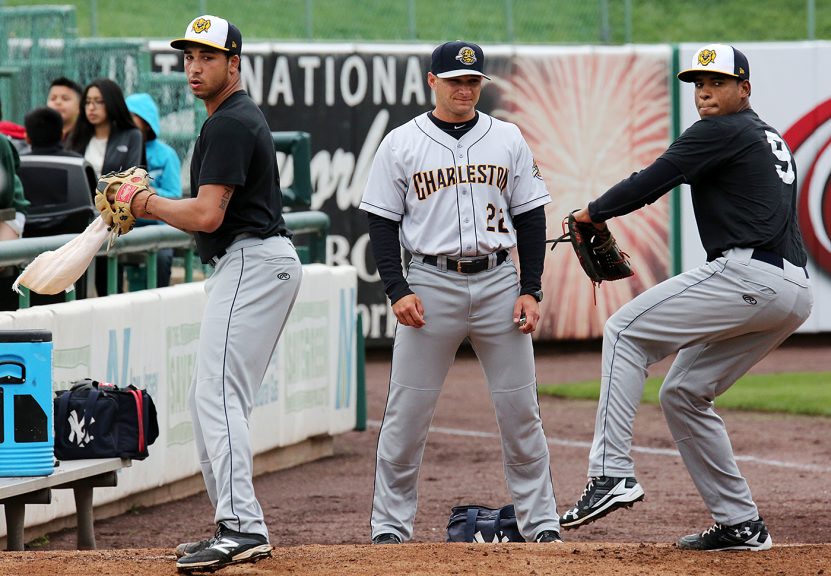 Charleston RiverDogs pitching coach Justin Pope works with Willie Gabay and Daris Vargas (9) before a game the Lakewood BlueClaws at FirstEnergy Park in Lakewood on Wednesday, April 27, 2016. The RiverDogs beat the BlueClaws 3-2. Photo by Martin Griff

Perez would develop into the ace of the starting rotation. Perez went 10-3 with a 2.84 in 24 starts. In 123 and two-thirds innings, Perez struck out 117 batters, allowed just 96 hits, and walked 45 for a 1.140 WHIP. A key moment in the season came when he brought the slider into his game arsenal in May. Perez had started off the season at 0-2 to that point and the addition of the slider made him dominant. 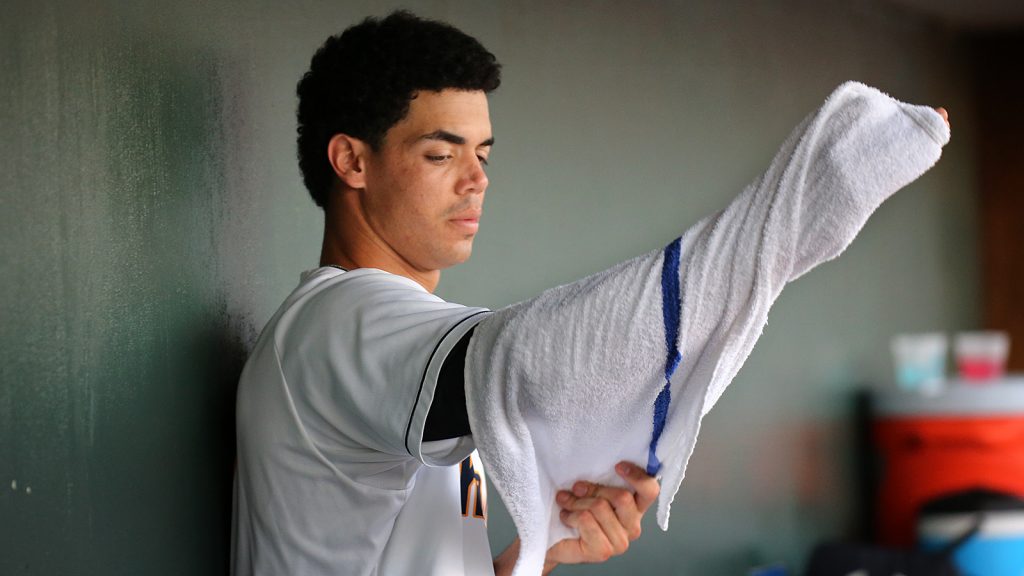 Charleston RiverDogs starting pitcher Freicer Perez wraps his arm in a towel between innings against the Lakewood BlueClaws  in Charleston on Tuesday, May 2, 2017. (Martin Griff)

David Sosebee was the most consistent piece of that dominant bullpen for most of 2017 before getting the call to Tampa. Sosebee went 2-3 posting a 2.20 ERA in 35 games. He earned 13 saves while striking out 76 batters in 65 and one third innings pitched.

Phillip Diehl also deserves a mention out of the bullpen as he pitched to a 9-3 record with a 3.16 ERA. The lefty pitched in 28 games allowing 76 hits in 85 and one-third innings pitched while striking out 101. He also ended up starting five games in the middle of the season. 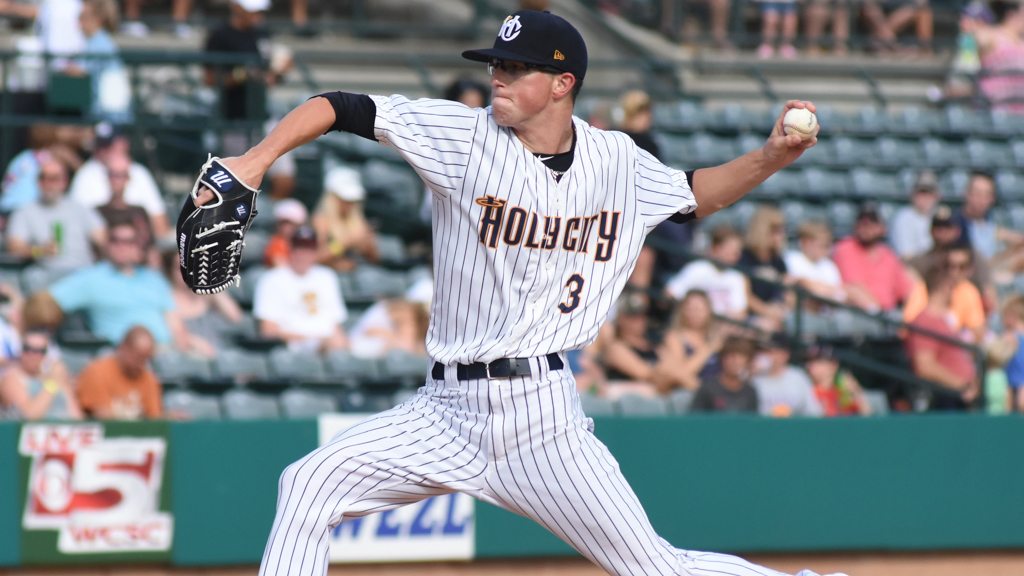 As far as the everyday players went, no one turned more heads than Estevan Florial in the outfield before he earned his promotion to Tampa on August 1. He showed great speed and range in the field and at the plate, showed some pop in his bat as well. While with the RiverDogs, he hit 11 home runs with 21 doubles and five triples to go along with a .297 batting average. He stole 17 bases in 24 attempts. The part of the game Florial does need to improve upon is cutting down on his strikeouts. He whiffed 124 times in 389 plate appearances. Florial’s play helped earn him a spot in the MLB Futures Game. 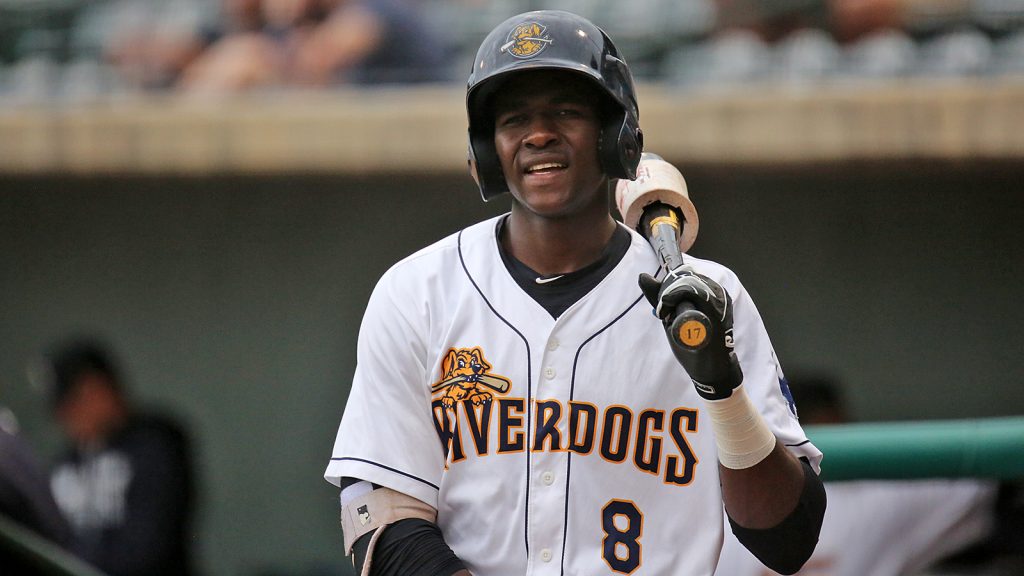 Isiah Gilliam was voted “Top Dog” by the fans as team MVP. Gilliam was the Dogs most consistent hitter after struggling out of the gate in April. After the first month of the season, he was hitting only .183 on the season. The switch-hitting corner outfielder batted .275, clocking 15 home runs, 33 doubles and four triples. He ended up driving in 85 runs in 125 games. 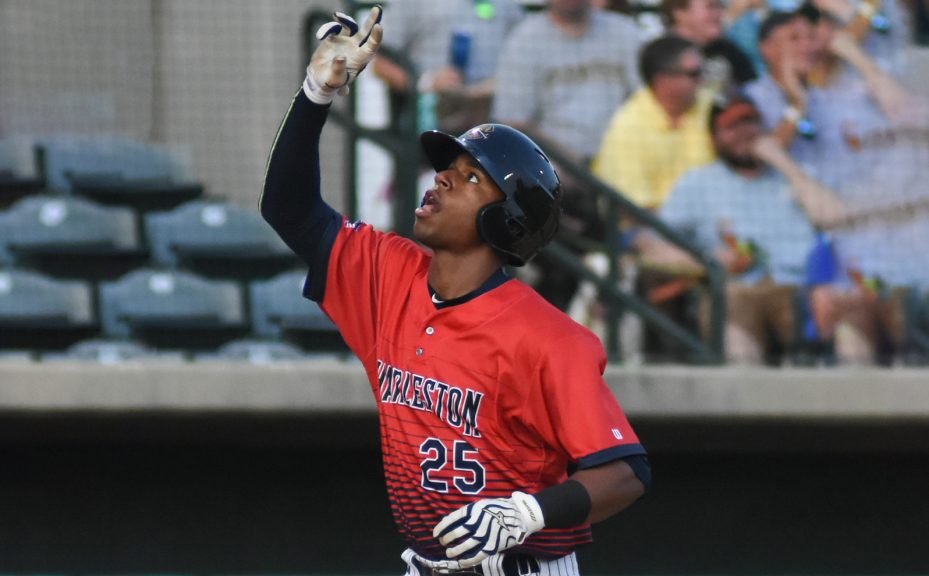 Isiah Gilliam points to the sky while rounding the bases after hitting a home run for the RiverDogs. (Jerry Coli)

Donny Sands struggled at times behind the plate catching, but did make significant strides in both blocking balls and throwing to second base. He had a key leadership role on the team before earning his promotion to Tampa on August 6. Sands hit .276 in 93 games in Charleston while hitting two home runs, collecting 17 doubles and driving in 43 runs. 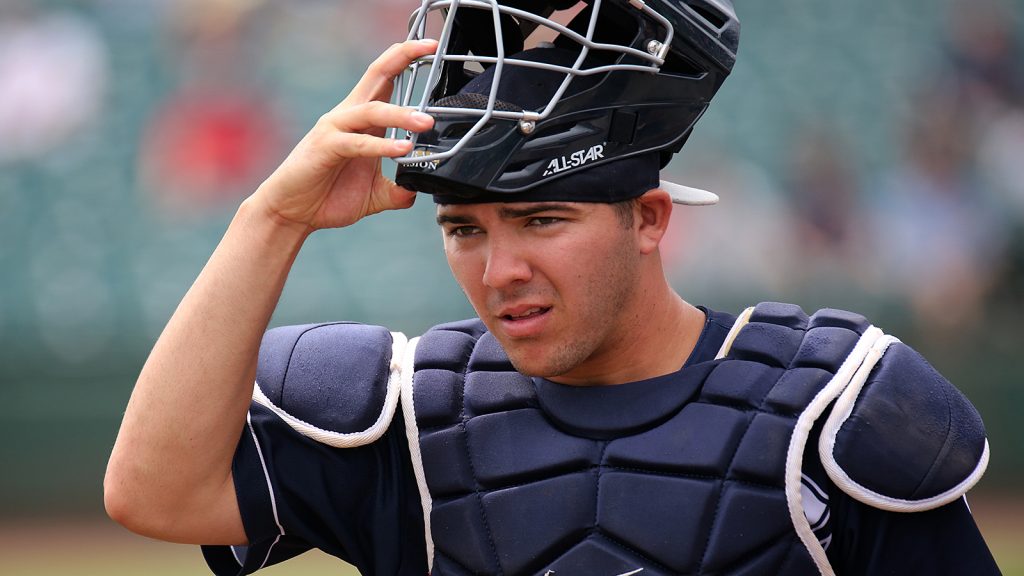 Charleston RiverDogs catcher Donny Sands before a game against the Lakewood BlueClaws in Lakewood, NJ on July 17, 2017 (Martin Griff)

Other standouts included Steven Sensley and Brandon Wagner. Wagner spent the entire season with the RiverDogs and was one of the more clutch hitters with runners on base. Wagner hit .277 in 110 games. He hit seven home runs and had 20 doubles while driving in 51 runs. Sensley was drafted by the Yankees in June and started off strong at Pulaski before earning the call to Charleston. In 21 games at Charleston, he ripped nine home runs and drove in 23 runs while batting .259. Between Pulaski and Charleston, Sensley ended up with a total of 13 home runs in 48 games. 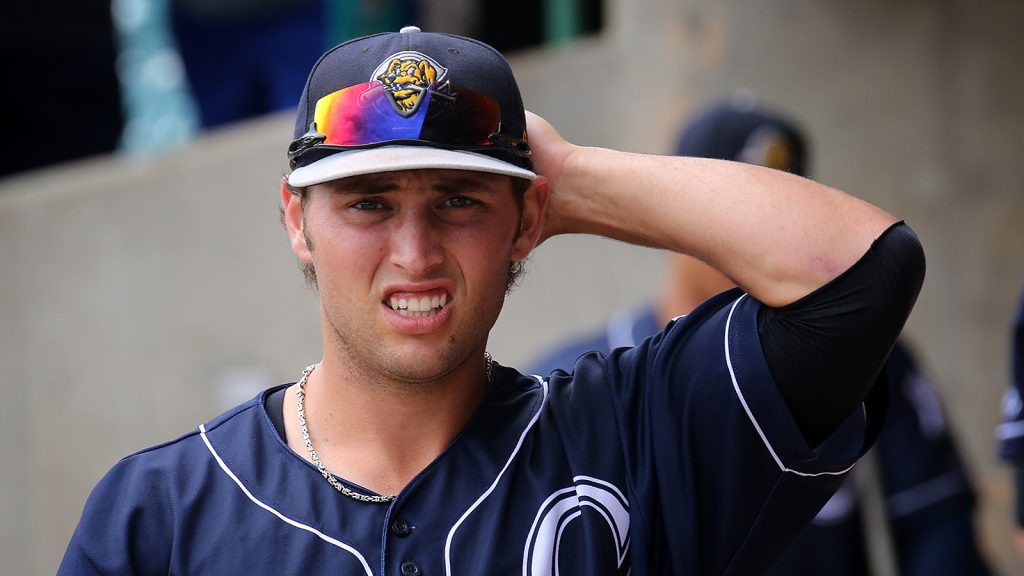 Charleston RiverDogs infielder Brandon Wagner before a game against the Lakewood BlueClaws in Lakewood, NJ on July 17, 2017 (Martin Griff)

Blake Rutherford ended up being traded to the Chicago White Sox organization as part of the deal that brought David Robertson, Tommy Kahnle and Todd Frazier to the Yankees. In 71 games in Charleston, he put up a .281 batting average with 20 doubles and two home runs. After the White Sox assigned him to Kannapolis, also of the South Atlantic League, Rutherford struggled to a .213 batting average in 30 games. 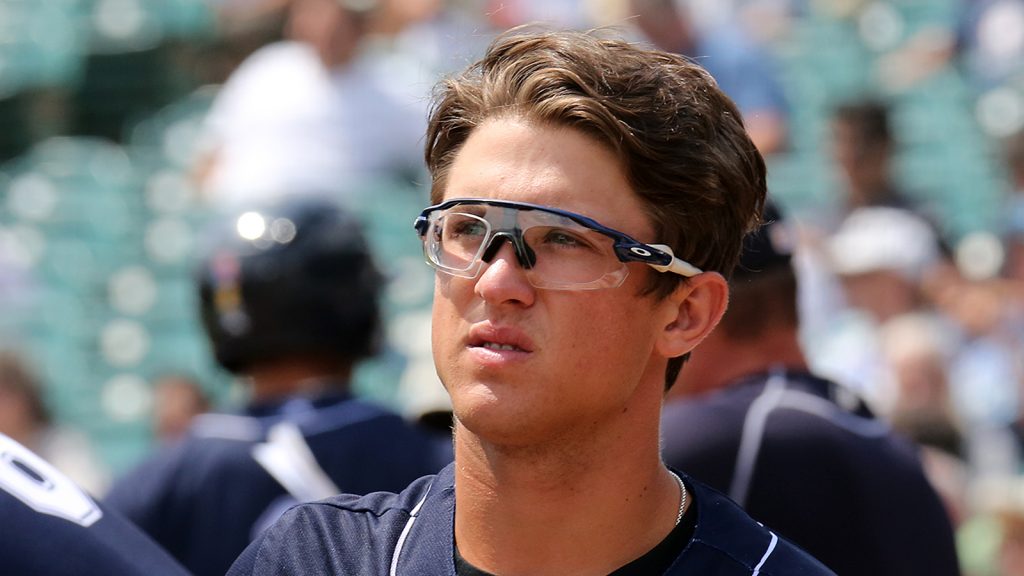 Charleston RiverDogs outfielder Blake Rutherford before a game against the Lakewood BlueClaws in Lakewood, NJ on July 17, 2017 (Martin Griff)

As for the team results, the RiverDogs ended up going 34-36 in the first half Southern Division race that placed them fifth, seven and a half games back of first place Greenville. In the second half, the RiverDogs jumped out to an early division lead and were never seriously threatened. They ended up going 42-27 in the second half to win the division and a second straight trip to the playoffs. They faced Greenville where they fell 2-1 in the best-of-three series. Greenville would go on to defeat Kannapolis 3-1 in the best-of-five South Atlantic League Championship series. The Dogs would finish with an overall record of 76-63.

“I’ve been lucky to have good players. I’m smart enough to know it takes good players to win. Being in this organization at this time, this organization is loaded. There’s seven of nine affiliates that have made the playoffs. I mean that’s unheard of. That just goes to show the depth of talent we have up and down this system right now. We’re lucky to be a part of it. This is just a byproduct of good players being able to get to the playoffs and having the chance to win,” manager Patrick Osborn said. 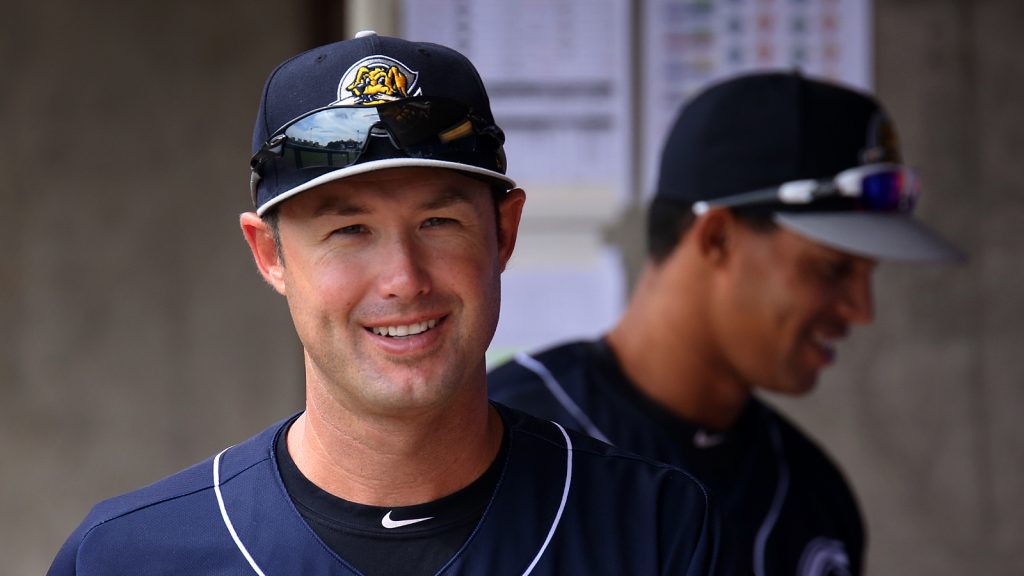 Charleston RiverDogs Manager Patrick Osborn before a game against the Lakewood BlueClaws in Lakewood, NJ on July 17, 2017 (Martin Griff)

Off the field, the RiverDogs debuted the Riley Park Club and also set an attendance record for the third straight season, passing the 300,000 mark in attendance for the first time. The Dogs drew 305,622 fans through the gates, smashing the previous mark of 293,161.