Checking Out the Yankees Mini-Camp in Tampa 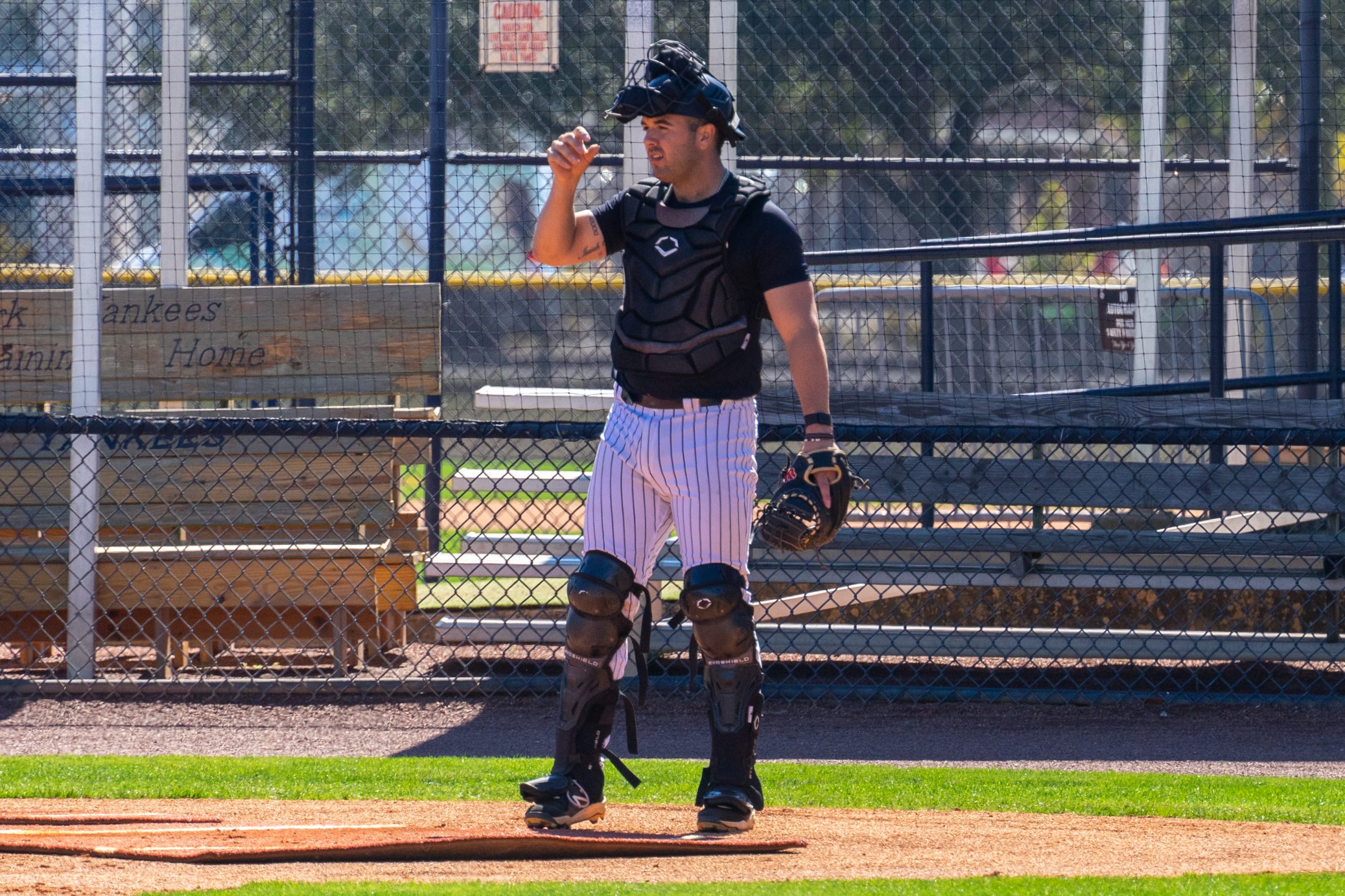 I was fortunate enough to stop by the Yankees Player Development and Scouting Complex in Tampa, Florida on Wednesday to check out the various activities that they had going on there for the minor league players.

There were three different fields in use. Field 1 (Billy Martin Field) was the primary one in use, and the only one available to media. Field 2 (Derek Jeter Field) was vacant. Field 3 (Babe Ruth Field) had some infielders doing ground-ball drills, and Field 4 (Lou Gehrig Field) had some pitchers doing some light throwing.

We’ll primarily discuss Field 1 however, since that’s all that media was allowed to view and access. 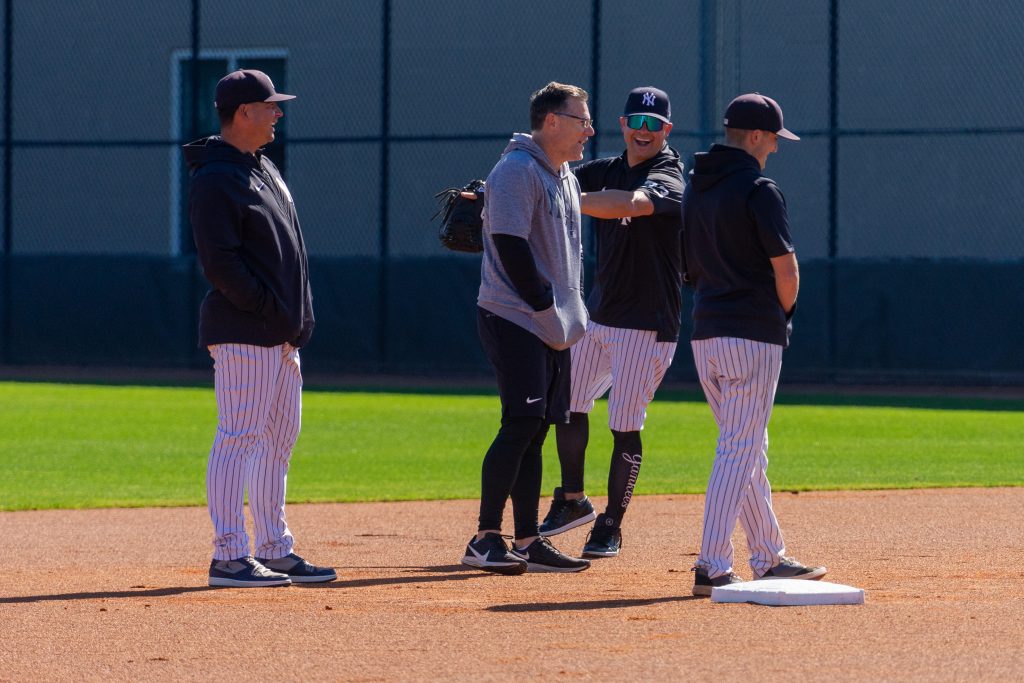 The late morning started off with some coaches gathered by 2nd base, with Special Assistant to the GM, Nick Swisher, in attendance. 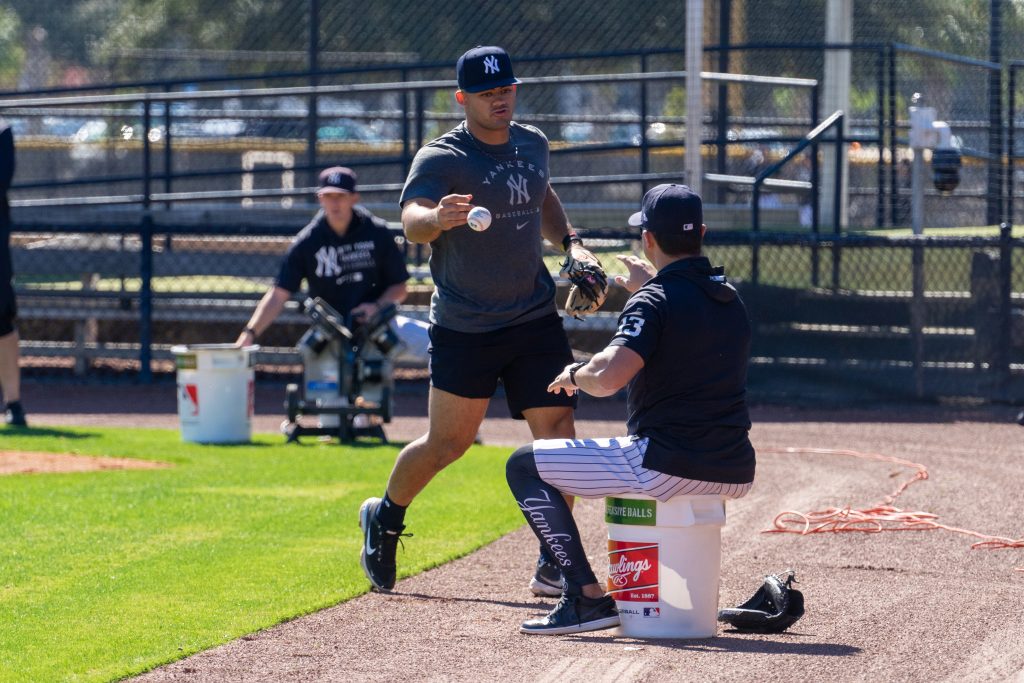 Jasson Dominguez and Ryder Green took some dribbler ground balls from home plate to halfway up to third base, but that was very brief. Swisher supervised them and coached the players a little during the other player’s turn. 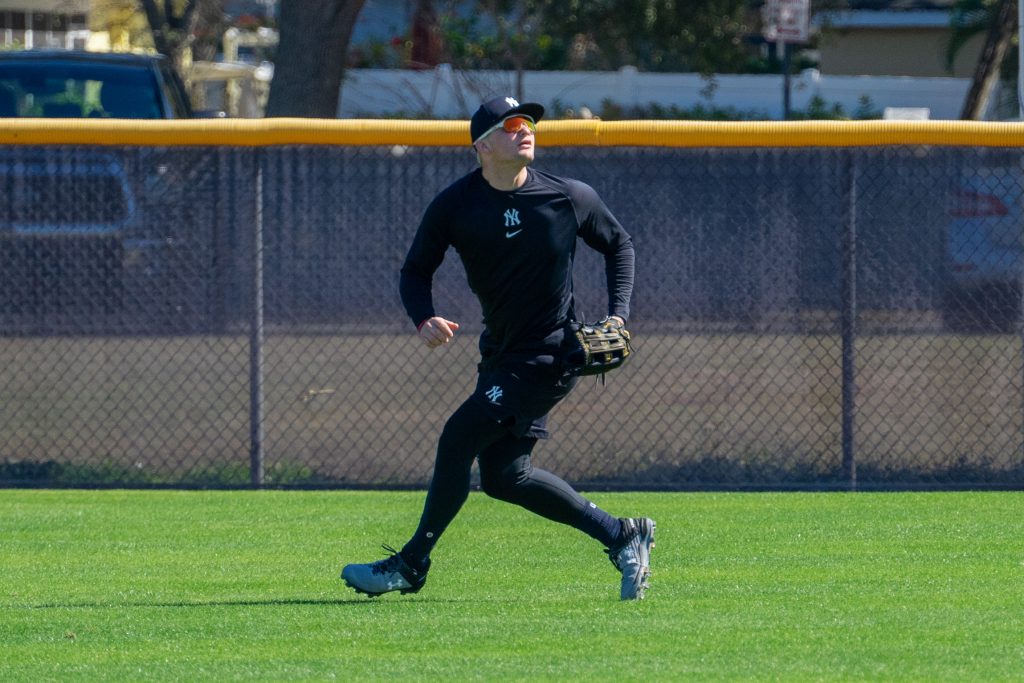 A few outfielders later started to emerge from behind the fences and threw some warmup catch to each other, just like they would before a game. These outfielders, which included Elijah Dunham and Pablo Olivares in addition to Dominguez and Green, took some fly-ball practice led by coaches Nick Swisher and Low-A Tampa’s defensive coach, Ryan Hunt. 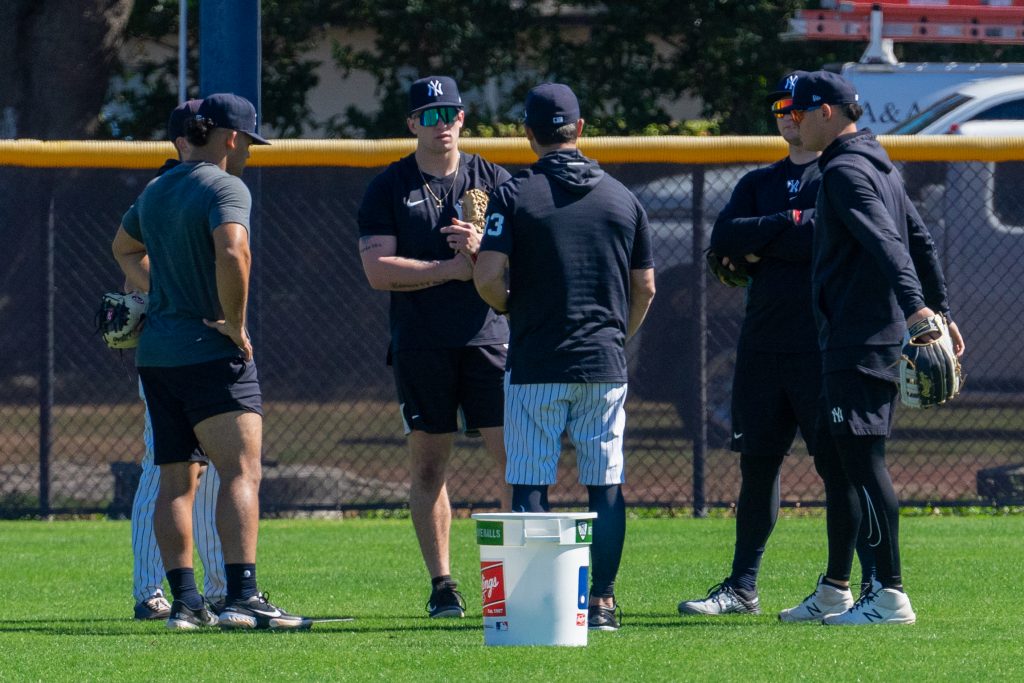 Nothing special there, they were just running underneath the fly balls to catch a bloop pop-up and later tossing the ball into a bucket. They all later converged and coach Ryan Hunt discussed some strategy with them using an iPad. 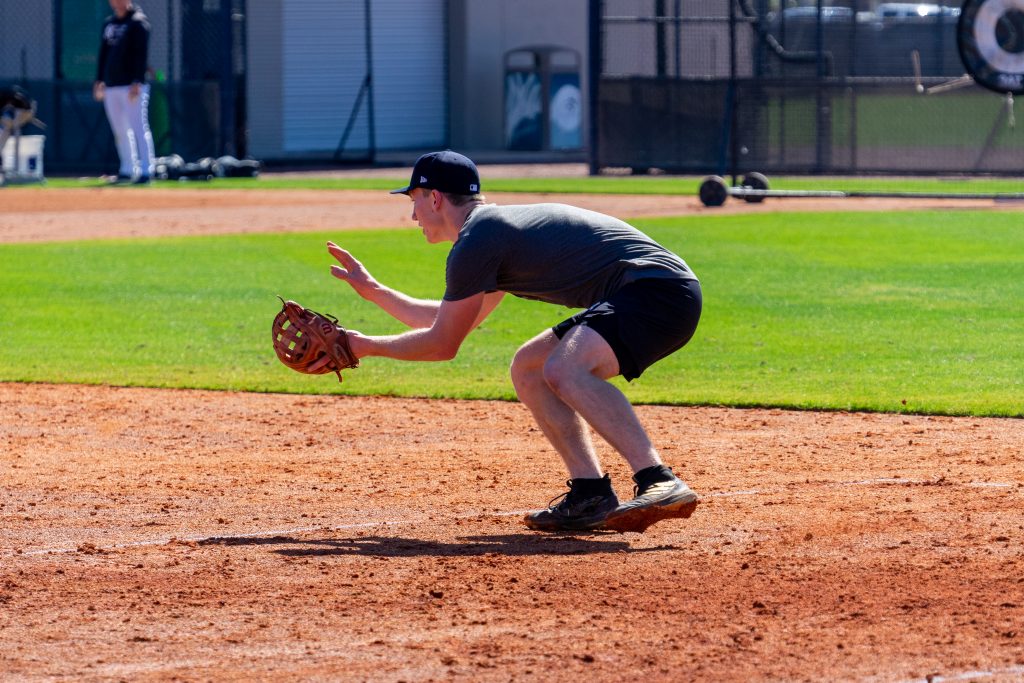 Cooper Bowman, the Yankees’ 4th round pick in the 2021 Draft was taking ground balls at third base and was flinging them to a target at first base. Bowman certainly looked good and comfortable in doing so.

They had him spin around so he faced the base and when he heard the bat make contact. Bowman would spin back around to receive the ball. Bowman looked very quick on his feet and had plenty of power to get across the field to the target at 1st base. 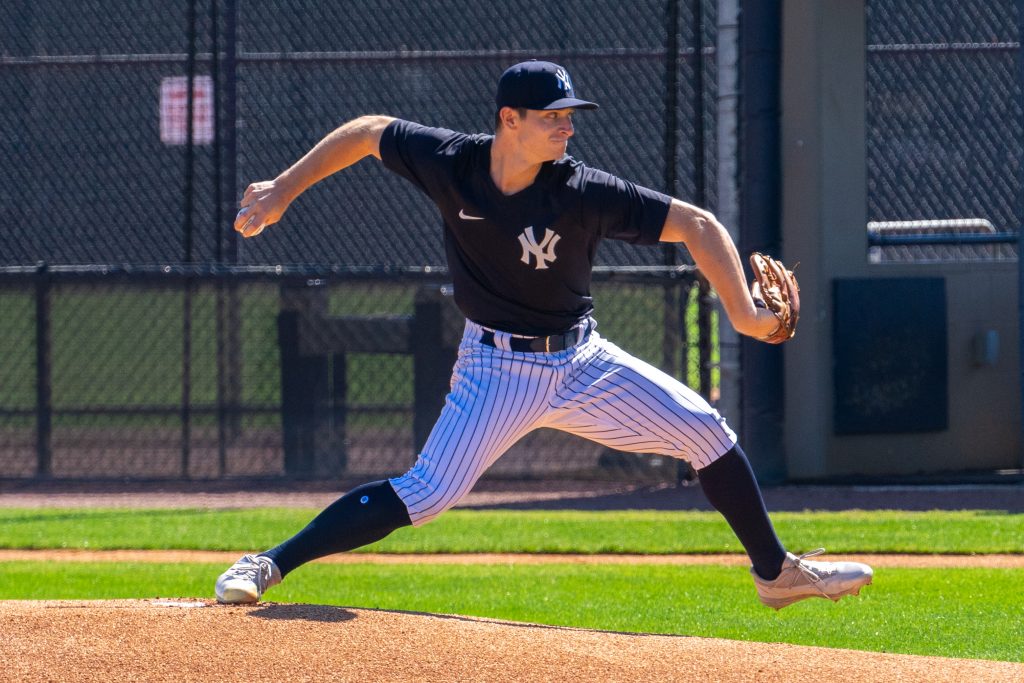 After all of these activities were done, the coaches cleared the field and set up screens as if they were to perform batting practice. It was instead a simulated game of sorts to get Sean Boyle some pitches. Boyle threw about 30 pitches to catcher Austin Wells, with the batter as Mickey Gasper, who batted from both sides of the plate. Gasper got a hold of one which landed in left-center, and hit two foul balls that went over my head on the third base side. 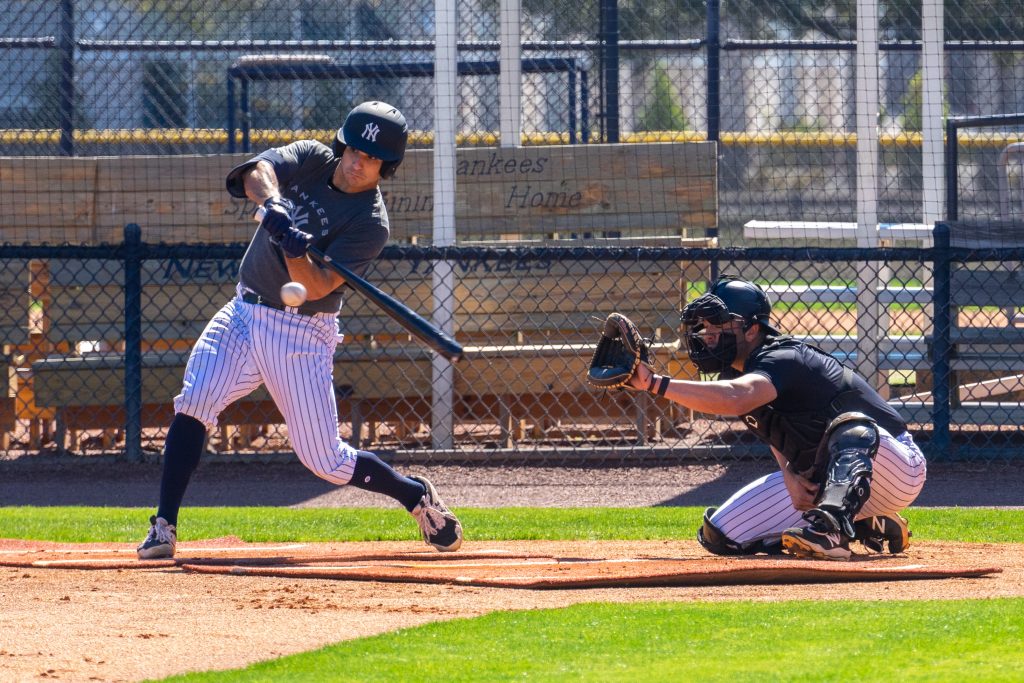 Altogether, it was about two hours of on-and-off drills and other activities, although I’m sure they were using the cages they have on the premises as well.

Stay tuned as we’ll have more Spring Training content in the weeks to come!