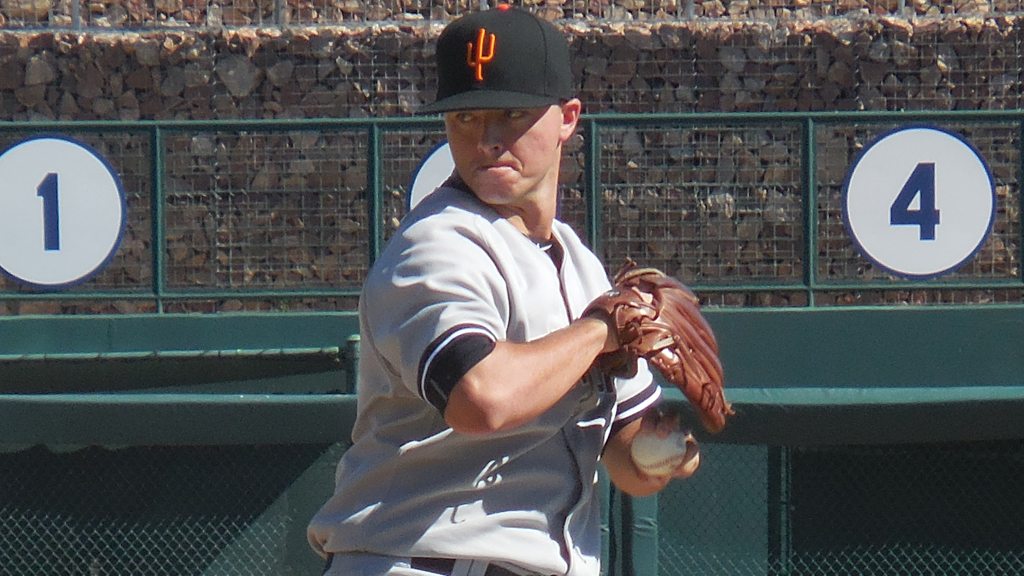 New York Yankees top pitching prospect Ian Clarkin got the start last night for the Surprise Saguaros and was touched for 3 runs on 4 hits and 3 walks over 4 1/3 innings, striking out 4 of the 20 batters he faced and throwing 73 pitches.

Clarkin needed just 6 pitches to get through the first inning of the game, inducing a line out and two ground outs before walking back to the dugout.  In the bottom of the second inning he earned 3 strike outs.  The first one came on 3 pitches when he got Daniel Palka to strike out swinging.  Then after a 7 pitch at bat Spencer Kieboom was struck out looking before Ramimel Tapia did the same thing on 4 pitches.  In total he threw 20 pitches through 2 innings of work.

The bottom of the third inning is where Clarkin started to find some trouble.  After getting L.J. Mazzilli to fly out to center on 2 pitches, Emilio Guerrero singled on the fourth pitch of his at bat.  The next 4 pitches thrown by Ian were balls to Chris Bostick who went to first on a walk.

Roemon Fields was next up at the plate and immediately fouled off the first pitch he saw, before looking at a ball and fouling off the next 4 pitches.  On the seventh pitch he was caught looking for Ian Clarkin’s fourth strike out.  Jack Reinheimer then flew out after seeing 7 pitches to end inning.  The inning more than doubled Ian’s pitch count in the game.

Clarkin came back out for the bottom of the fourth inning.  Dominic Smith worked a walk on 6 pitches before Daniel Palka flew out to left on the fifth pitch of his at bat.  Ian would need just 2 pitches to get out the second out of the inning but 3 pitches later he would give up an RBI triple to Raimel Tapia.  He got out of the inning after L.J. Mazzillie grounded out to second on a 2-0 count.

The bottom of the fifth inning is when the wheels came off.  Emilio Guerrero lined the ball in to center for a double on a 0-1 count, Christ Bostick flew out on the first pitch saw before Roemon Fields tripled on the second pitch of the at bat.  Clarkin struggled next, throwing 3 straight balls before finally earning a called strike on the fourth pitch of the at bat but the fifth pitch was outside the zone and he walked Jack Reinheimer.  That was it for him as fellow Yankee Chaz Hebert came into the game to relieve him.

Herbert walked Dominic Smith, the first batter he faced before giving up an RBI single to Dominic Smith, the run being charged to Clarkin.  Spencer Kieboom then flew out to centerfield to start a double play with Reinheimer out at home.

Chaz went on to throw 2 innings allowing 1 earned run on 2 hits and 2 walks, he did not strike out any batters.  At the plate Tyler Wade batted second in the lineup and went 1-for-4 with a single.  He played shortstop in the field while Tyler Austin was in left field and went 0-for-4.