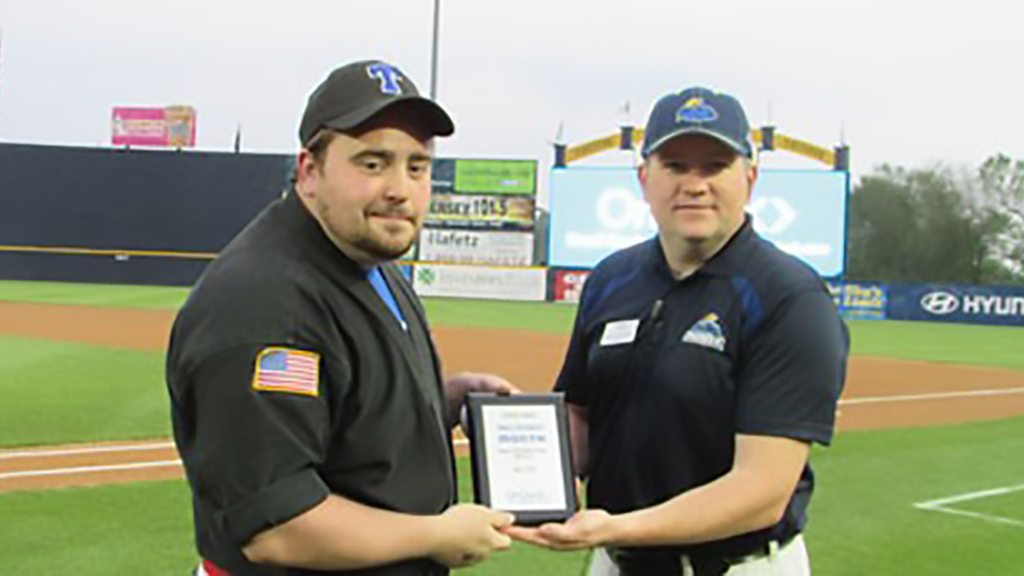 CMB Karate, located at 2025 Old Trenton Road in West Windsor, NJ, has been named the OnDeck Small Business of the Month, and was honored by the Thunder this past Saturday prior to their game with the Harrisburg Senators.

The Thunder welcomed owner Christopher M. Brooks to ARM & HAMMER Park to throw out a ceremonial first pitch and was honored on the field with a special plaque by Thunder General Manager Will Smith.

Brooks is the head instructor and founder of CMB Karate and holds a 5th Dan Black Belt and a Black Belt in Katana. Brooks was honored as part of the 2014 USA Martial Arts Hall of Fame Induction as the Karate Master Instructor of the Year.

CMB Karate just entered its fourth year in business this spring and has grown to 75 students from the ages of three to 63. CMB Karate teaches women’s self-defense classes and works with children that have disabilies – aiding the latter with self-control and being physical.

This summer, CMB Karate will host a summer camp for kids ages 6-14 from August 24-28 at their West Windsor location.

For more information, fans can visit their website at CMBKarate.com.

OnDeck launched the Small Business of the Month Award program in partnership with Minor League Baseball to recognize small businesses that are making a positive impact in their local communities.

CMB Karate joins select small businesses across the U.S. who will be recognized by OnDeck and Minor League Baseball across more than 20 activation clubs this season. OnDeck is hosting Small Business of the Month Award contests on Facebook throughout the season. To apply, visit OnDeck’s Facebook page at www.facebook.com/OnDeckCapital.

The Thunder will begin a three-game series with the Bowie Baysox (Baltimore Orioles) tonight at 7:00pm at ARM & HAMMER Park. It’s Super Value Tuesday! Kids Eat for Free and all fans can purchase $1 hot dogs, courtesy of Black Bear Franks. For tickets log on to Trentonthunder.com/tickets or call 609-394-3300,