Coles: Looking at Aroldis Chapman's Choice to Remain a Yankee

On the night of November 2nd, Chapman was able to prove that he wanted to stay by negotiating an extension with the Yankees that would keep him the Franchise through the 2022 season.

According to Jeff Passan, Aroldis Chapman will add an extra year at $18 million on top of the two years, $30 million remaining on his deal. The deal will keep Chapman with the Yankees through the 2022 season. 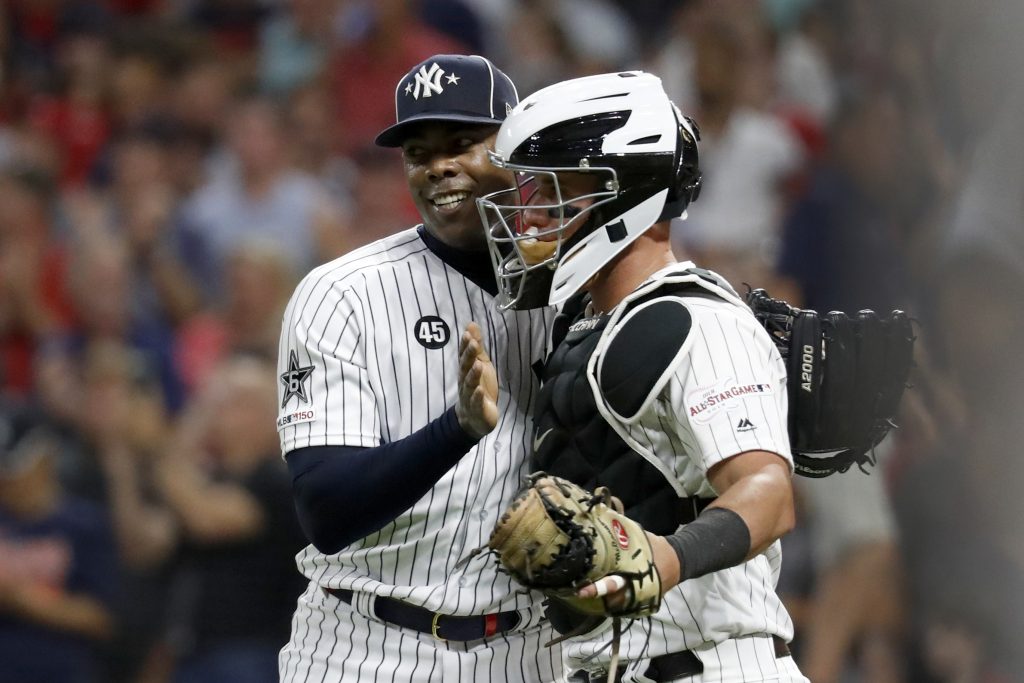 It was not a sure thing by any means that Chapman was going to stay around, regardless of what he said throughout the season. After all, even in an uncertain free-agent market, Crag Kimbrel was able to land a three-year deal worth $43 million last offseason. Granted he had to wait until June to sign the contract, and that seemed to hinder his play, he still got paid.

With Chapman returning, the Yankees will bring back their incredibly deep bullpen: Adam Ottavino, Zack Britton, Aroldis Chapman, Tommy Kahne, and Chad Green. The only potential serious loss may be Dellin Betances, a four-time All-Star who appeared in just one game this past season due to two injuries. Betances is set to become a free agent this offseason, and teams will likely be prepared to make big offers to him, which may push the Yankees away depending on their grander plans for putting a World Series contender on the field next season.

Chapman has been the Yankees’ best closer, maybe in franchise history, behind Mariano Rivera. Since joining the Yankees, Chapman has slowly reinvented himself on the mound as his fastball velocity has declined with an increase in his age. Once a tall and skinny left-handed reliever, without a true second pitch, that could touch 105 MPH with his fastball, Chapman has worked on becoming more of a pitcher. Let’s take a look at his pitch usage from 2017, when he joined the Yankees, to 2019.

As you can see, Chapman has increased his slider usage by 11.4% over the course of three seasons. He has also incorporated a sinker into his arsenal after not throwing one in 2017. In that same time frame, Chapman’s average fastball velocity has dropped from 100 MPH in 2017, to 98.7 MPH in 2018, to 98 MPH in 2019. It’s worth noting that in that same time frame Chapman has gone from a healthy 29-year-old to a 31-year-old with nagging knee issues, so it’s not so much of a surprise that he has tried to reinvent himself.

These changes should not necessarily be seen as a red flag. Rather, it should keep the Yankees optimistic that Chapman has the ability to become more of a pitcher than a thrower, which will aid him in staying relevant through 2022. It’s worth keeping in mind, though, that the man that has been the pitching coach throughout the time that Chapman has made these changes, Larry Rothschild, has been let go. How much of a difference that really makes is hard to calculate, but it’s likely that the Yankees’ front office and baseball operations department has a plan for him regardless of who the pitching coach is.

Yes, there is definitely a reason to be worried about Chapman’s ability to remain a powerhouse bullpen arm through the 2022 season. He has had knee problems since 2017 and his fastball velocity has taken a drop in every season since 2016. However, if he is able to continue to tailor his slider and sinker to become truly effective secondary pitches that can make a fastball in the upper 90s perennially effective, then the Yankees will be happy that Aroldis Chapman is still waiting in the bullpen for those high leverage situations.