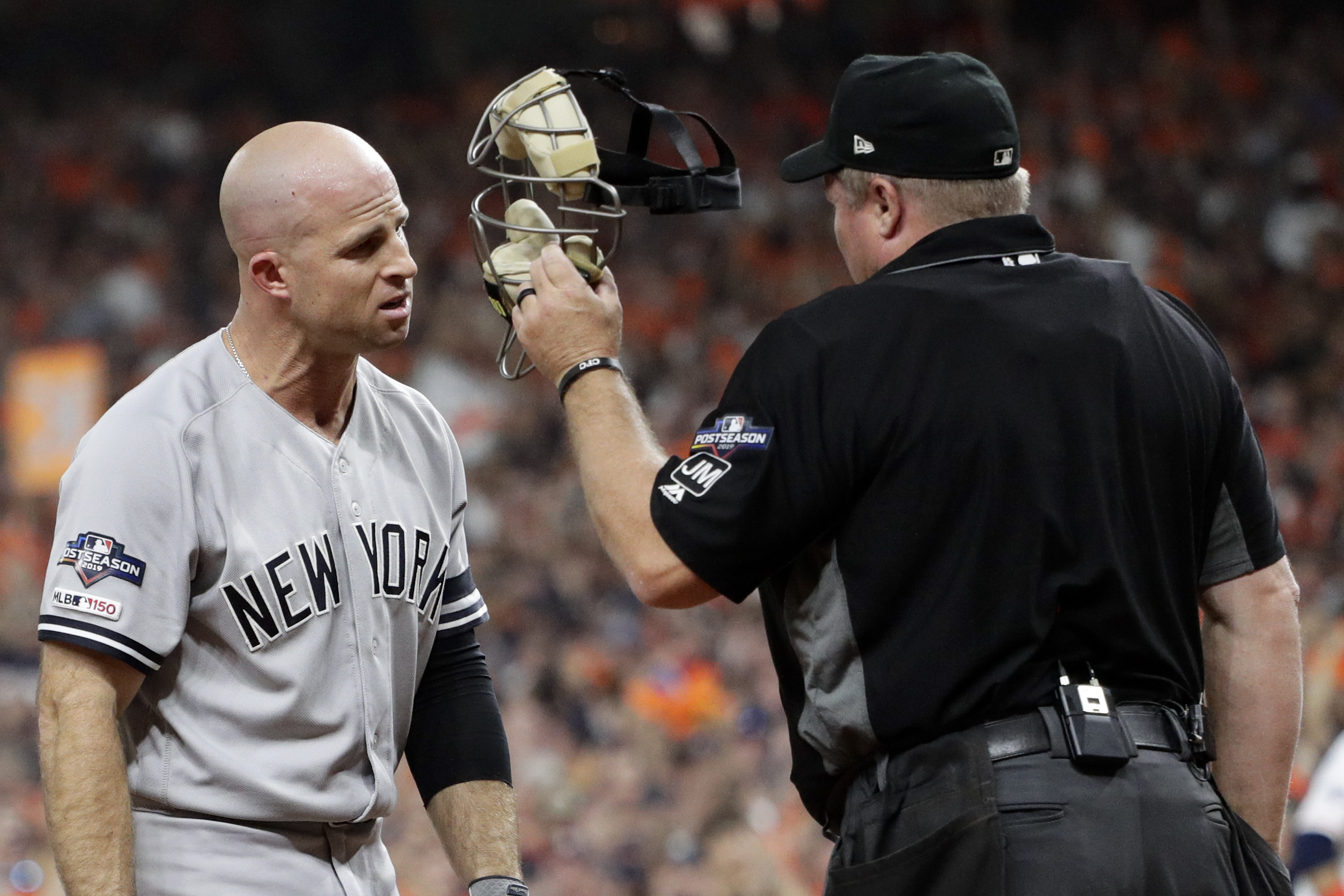 The Yankees’ season came to a stunning end Saturday night. After trailing for the entirety of game six in Houston, DJ LeMahieu smacked a game-tying two-run home run in the top of the ninth inning into the first row of the right-field seats at Minute Maid Park. The place was stunned, and it felt (for a second) like the Yankees were poised to force a game seven.

Had the Yankees gone on to win the ballgame, DJ’s at-bat would have a chance of going down as one of the greatest at-bats in New York Yankees history, a ten-pitch grind-it-out at-bat that was emblematic of the Yankees’ rallying cry; Savages in the Box. But now, as the dust settles and the Yankees head home one last time, it will likely live on in similar fashion as Alfonso Soriano‘s home run in game 7 of the 2001 World Series. A great moment, but one covered up by a gut-wrenching loss. 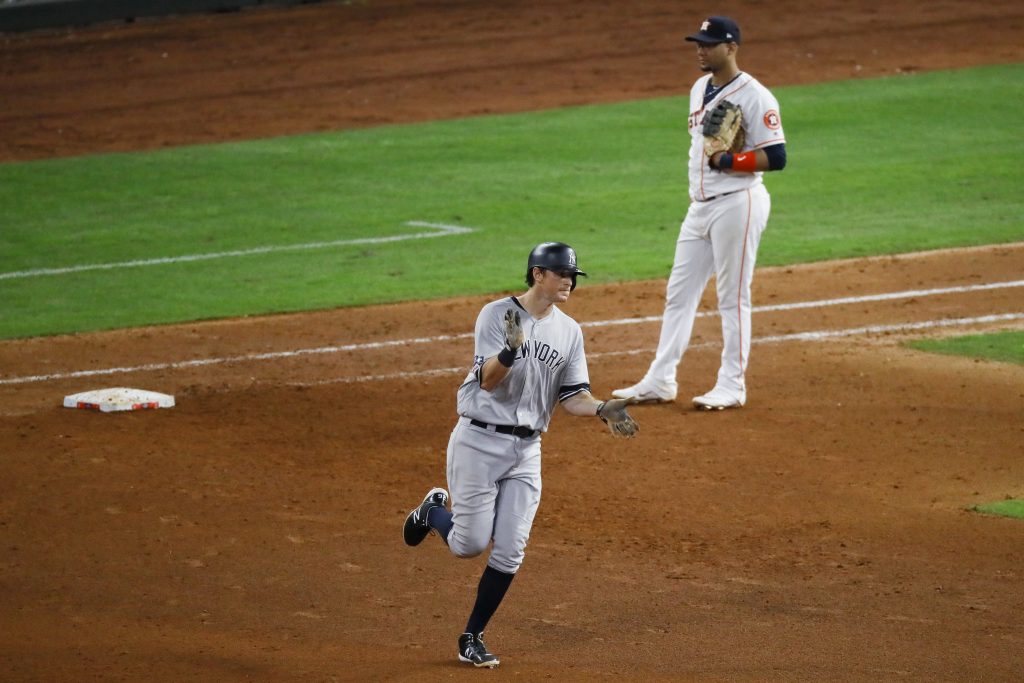 The Games in Houston

The series was not devoid of chances by any means for the Yankees. They stole game one in Houston handily and had a lead in game two. The series seemed to shift in momentum in game two, however, when George Springer launched a mammoth solo home run to tie the game off of Adam Ottavino in the bottom of the fifth inning. The Yankees had just taken Chad Green out of the game so that Ottavino, arguably the Yankees’ best reliever all season long, could face the top of the Astros lineup. He was ambushed on the first pitch, the Yankees could not buy a run for the rest of the game, and Carlos Correa hit a walk-off home run in the bottom of the 11th inning to tie the series.

Still, though, the Yankees had done their job. They stole a game in Houston and were going back home for three games. Game three, however, was a weird one. Not only did they have to face Gerrit Cole, but it was a peculiar 4 PM start time on a Tuesday afternoon in New York City. But even facing the best pitcher in baseball, the Yankees had opportunities.

In the first inning, after back-to-back singles by LeMahieu and Judge, the Yankees were set up well. Then Brett Gardner came up and popped out. On the next pitch, Edwin Encarnacion popped out on a fastball right down the middle of the plate. Gleyber Torres then drew a four-pitch walk and the bases were loaded. Didi Gregorius stepped to the plate and grounded out on a first-pitch hanging slider. I can’t really blame Didi for taking a hack, the pitch was right there. When Cole gives you pitches like that to do damage on, you have to give it a good swing. 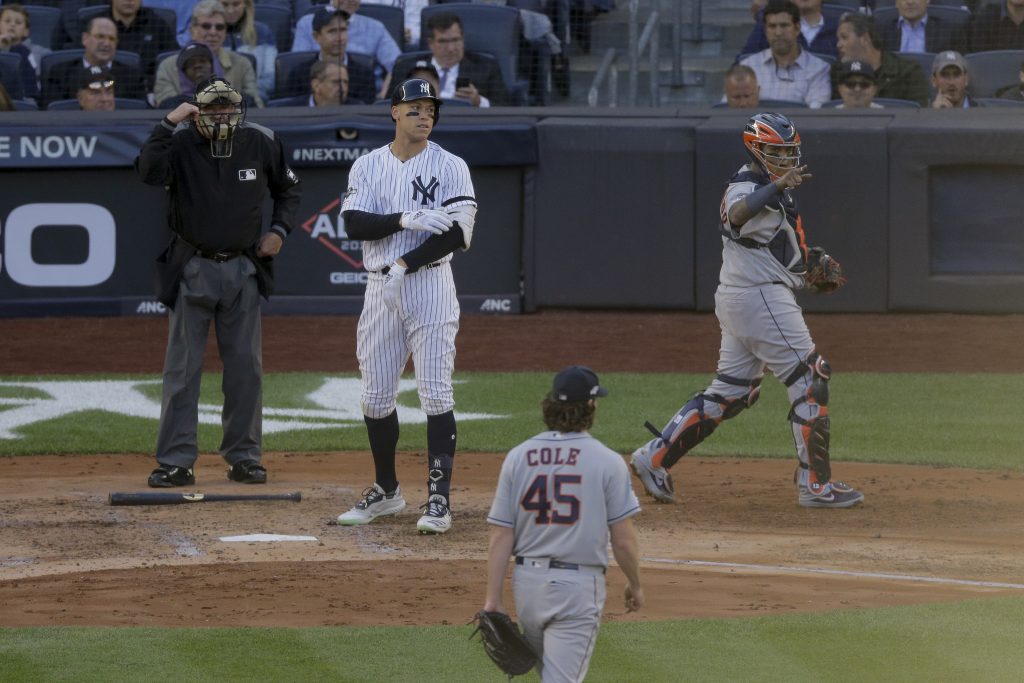 In the bottom of the 2nd inning, the Yankees once again had an opportunity. With two on and two out, Aaron Judge stepped to the plate. But he struck out on a fairly good slider down and away from Gerrit Cole, a pitch that Judge historically struggles with.

Then came another opportunity in the bottom of the 4th inning with two outs and two on for D.J LeMahieu down 2-0 in the game. LeMahieu got an absolute cookie of a pitch on 0-2 and drilled a hanging slider to Center Field, but he didn’t drill it far enough. George Springer settled under it and the inning was over.

Yet another opportunity, and perhaps one of the most overlooked moments of this series, came to the forefront in the bottom of the fifth inning of game three. Didi Gregorius came to the plate with two on and two out. On the first pitch, Didi swung at a ball that was in his sweet spot. Middle in and a pitch he usually drills to the right-field seats. Nonetheless, the ball died at the wall, and you could feel the life leave Yankee Stadium at that moment. The Yankees had left nine runners on base in five innings and scored zero runs. Yikes. The Astros would then take a 4-0 lead in the seventh inning and game three was over. The Astros had taken home field right back and led the series 2-1.

Game Four offered a clean slate. An ability for the Yankees to move on from a tough game three loss. Lo and behold, an opportunity presented itself in the very first inning. The Yankees loaded the bases and scored a run on a Brett Gardner walk. Gary Sanchez came to the plate with a chance to break the game open early and send Greinke to the showers. He missed badly on an 0-2 pitch and the Yankees left four runners on base.

Aaron Judge came to the plate with a runner on second and two outs in the second inning and struck out on a fastball down the middle. Another missed opportunity to tack on. The next half-inning George Springer launched a three-run home run into the left-field grandstand. But the Yankees weren’t dead yet. 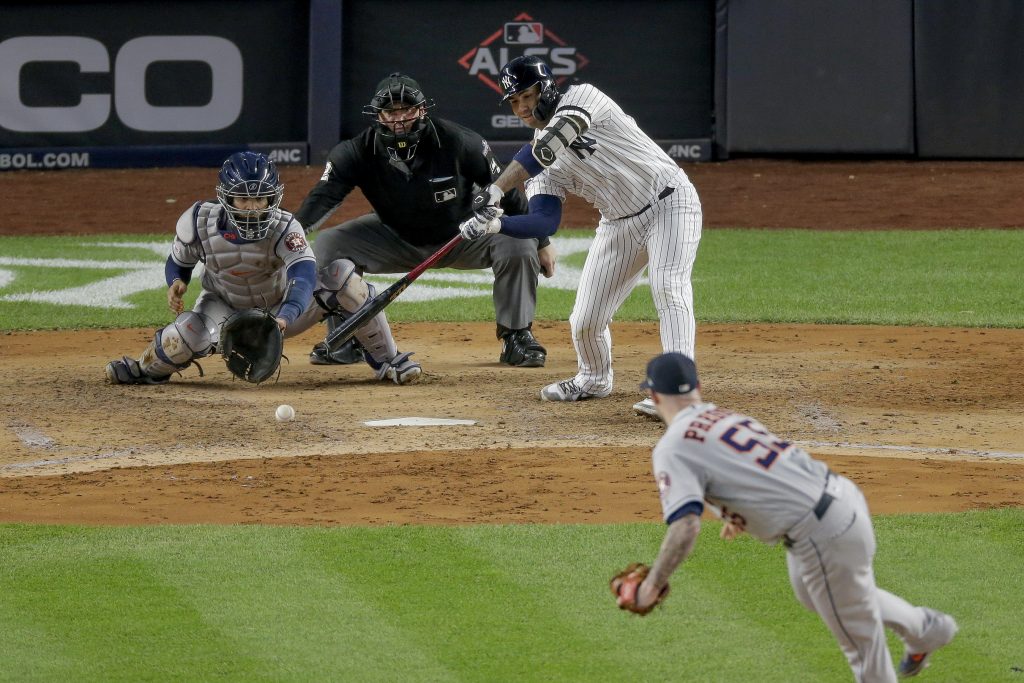 New York Yankees second baseman Gleyber Torres swings and misses at a ball low and away for strike three with the bases loaded during the fifth inning of Game 4 of baseball’s American League Championship Series against the Houston Astros, Thursday, Oct. 17, 2019, in New York. (AP Photo/Seth Wenig)

In the bottom of the fifth inning, Aaron Hicks came to the plate with two runners and just one out. He drew a big walk and the bases were then loaded for Gleyber Torres. Torres would strikeout, leaving a struggling Edwin Encarnacion as their final hope in the inning. Encarnacion struck out on a 1-2 fastball, and again the Yankees left the bases loaded. In back to back games through five innings in each, the Yankees left nine runners on base. That’s 18 runners in ten combined innings with nothing to show for it. Yikes again.

Game five was when the big hit came a bit too late. After a lead-off home run by D.J LeMahieu to tie the game at one apiece in the first inning, Aaron Hicks stepped to the plate with two runners on base. For the first time all series, the Yankees got the crucial hit with runners on-base. Hicks smacked a fastball off of the right-field foul pole, sending Yankee Stadium into a noisy uproar as 50,000 fans had been waiting for a moment to let loose for three days. While the series, even in this moment, felt lost. It was a relief not only to avoid losing the series at home but to see the Yankees get the big hit. And hey, crazier things have happened in baseball than a team erasing a 3-1 series lead. But all in all, when it came to game five, it just felt like too little too late.

Again, in-game six, the Yankees found themselves with some opportunities to storm back down 3-0 early on in the game. At the top of the 2nd inning, Didi Gregorius hit a double, and Gary Sanchez followed it up with an RBI single up the middle to cut the lead to two. The inning wouldn’t be complete without another missed opportunity, however. Gio Urshela would draw a walk and Brett Gardner stepped to the dish with two and two out, only to strikeout to end the inning.

Then came the top of the third inning, where Aaron Judge and Gleyber Torres reached base to set up the 4,5,6, hitters with two on and one out still down 3-1. Aaron Hicks would fly out to Josh Reddick for out number two, then Edwin Encarnacion would actually draw a walk to load the bases for none other than Didi Gregorius. The Astros brought in Ryan Pressly to face the left-hander and Didi inexplicably took a hack at the very first pitch, a curveball on the outer half, and grounded out softly to first. I said earlier that Didi’s first pitch swings were acceptable the first two times, but this was truly head-scratching. Against a new pitcher coming into a high leverage situation on a pitch on the outside half, you cannot swing at the first pitch. If you do, it has to be a hit. 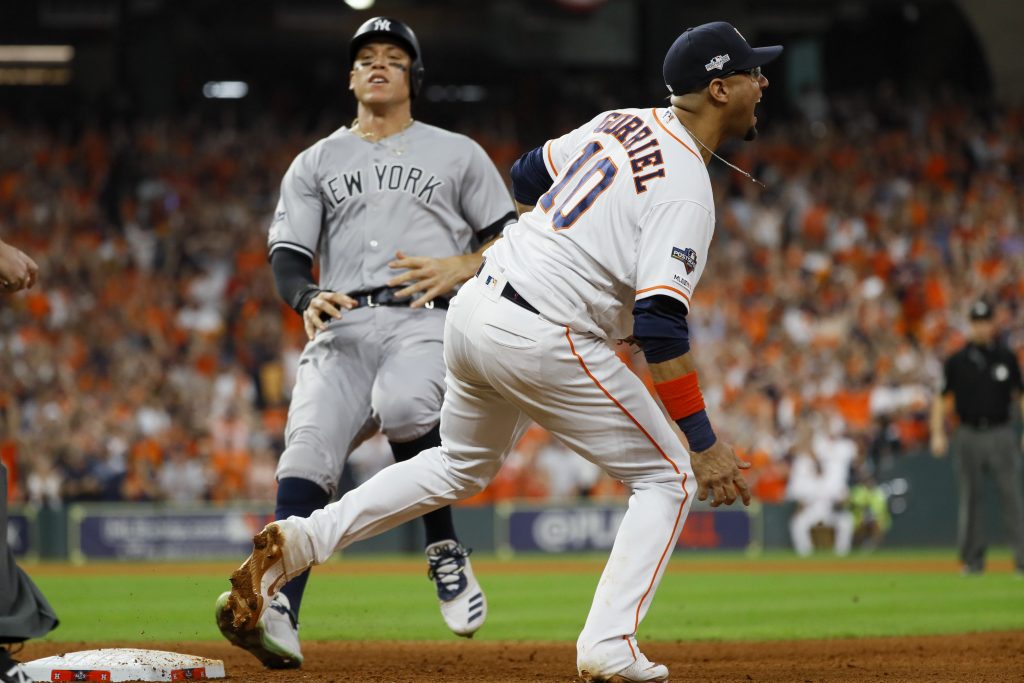 Yet another opportunity presented itself at the top of the sixth inning. With two runners on and one out, Brett Gardner stepped to the plate. He smacked a line drive to right field, and Josh Reddick made a nice diving catch for the second out. Even when the Yankees put good wood on the ball, things didn’t go their way with men on. The inning wasn’t over yet, though. LeMahieu had a chance right after with two men on but would ground out softly on the very first pitch. I am beginning to write like a broken record.

At the top of the seventh inning, it again looked like the Yankees were going to get something going. Aaron Judge led off the inning with a single which set up Aaron Hicks as the tying run. He hit a bloop fly ball to left field, and Michael Brantley made a spectacular diving catch and doubled off Aaron Judge at first base. At this moment, it felt like destiny for the Astros.

We all know what happened in the top of the ninth and then in the bottom half. But the Yankees should have never been in that spot to begin with. In basically every single loss in this series, the Yankees had numerous chances to win. But that’s baseball, Suzyn.