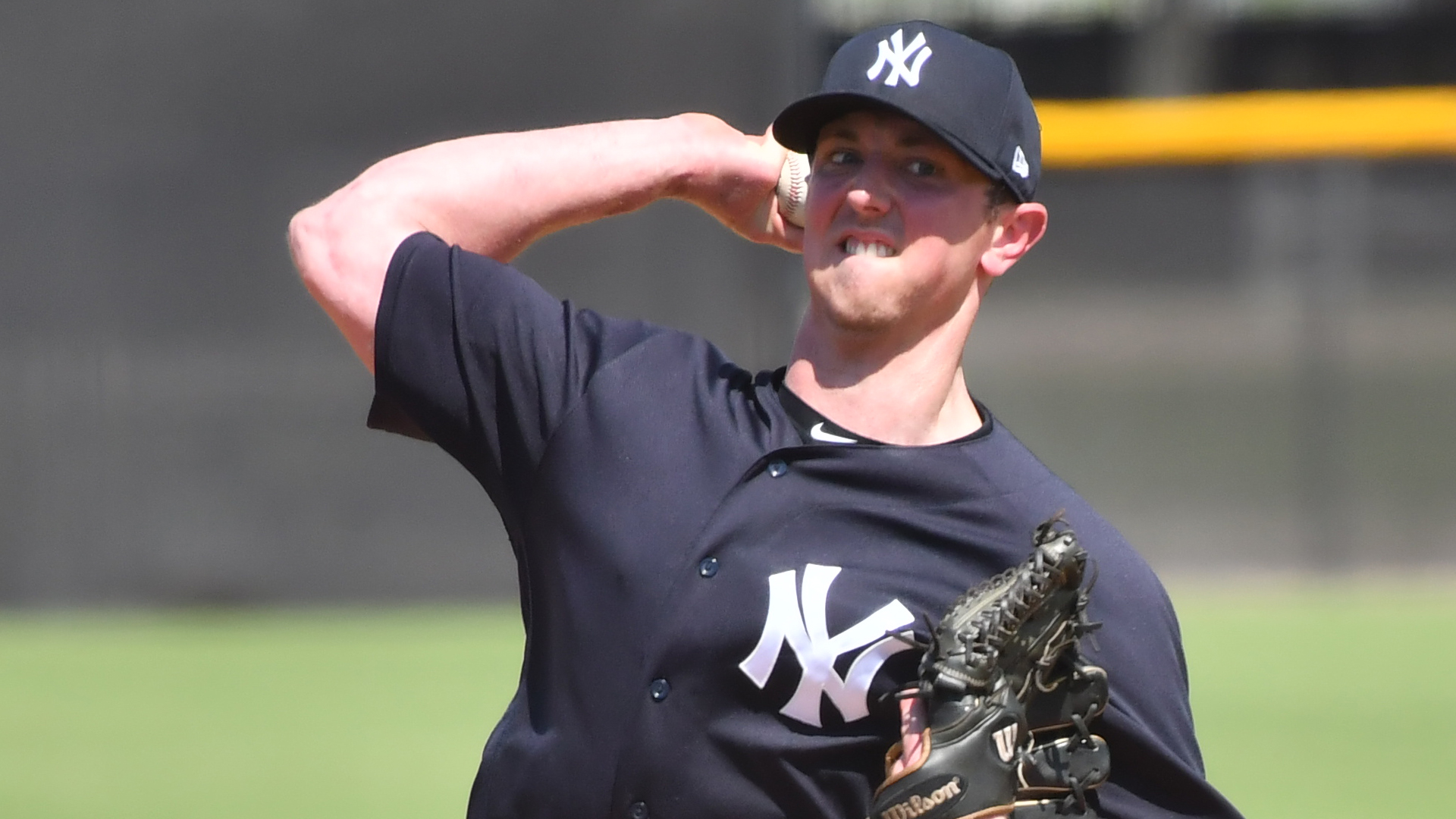 If there is one thing that Yankees fans have been reminded of in the last 24 hours, it’s that there is no such thing as a sure thing. I know, it’s been a while so we almost forgot. Saturday was a flashback to the 2019 injury fest. Masahiro Tanaka was struck in the head by a Giancarlo Stanton line drive. DJ LeMahieu and Luis Cessa both tested positive for Covid-19. So, while we obviously hope for the speedy recovery of everyone’s ailments and bruises, we must also think about what names on the Yankees’ 60 man roster could make a difference this season.

I do think, despite DJ testing positive, that replacement pitching arms will have a chance to make an impact this season. According to Phillies’ pitcher Cole Irvin, he said he believes that a pitcher catching Covid-19 would cost a pitcher six weeks. Two weeks of isolation, two weeks of playing catch, and two weeks of bullpen work. If this is indeed the case, then some pitchers that haven’t had experience in the MLB might get more opportunities to perform on the big stage. 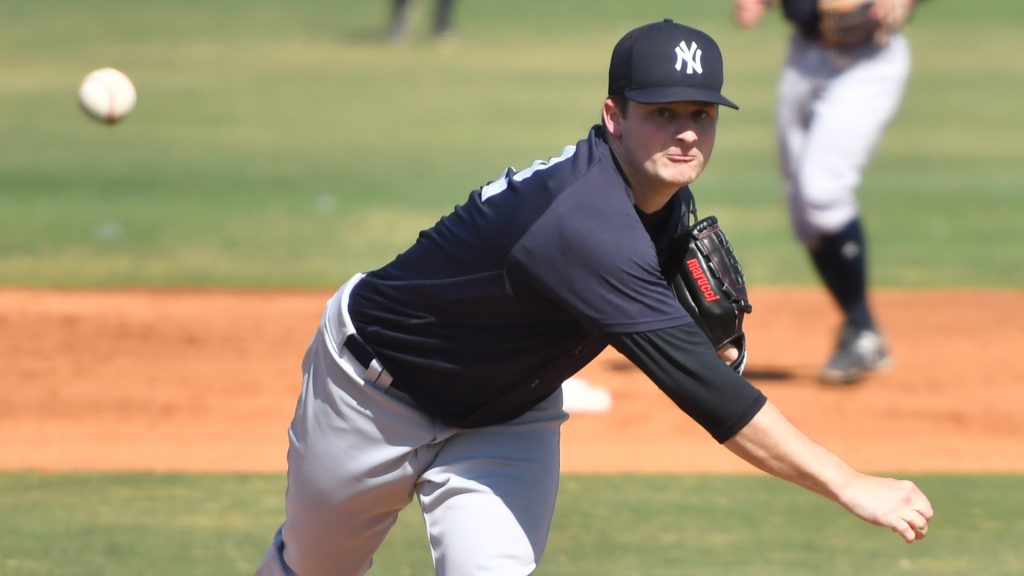 Schmidt has the upside of a number two or three starter. His fastball sits 92-94 miles per hour and can reach up to 96 (even after Tommy John surgery). Due to the amount of sink on the pitch it can be graded as + to ++. His slider and curveball are also both graded as above-major league average offerings according to MLB.com. 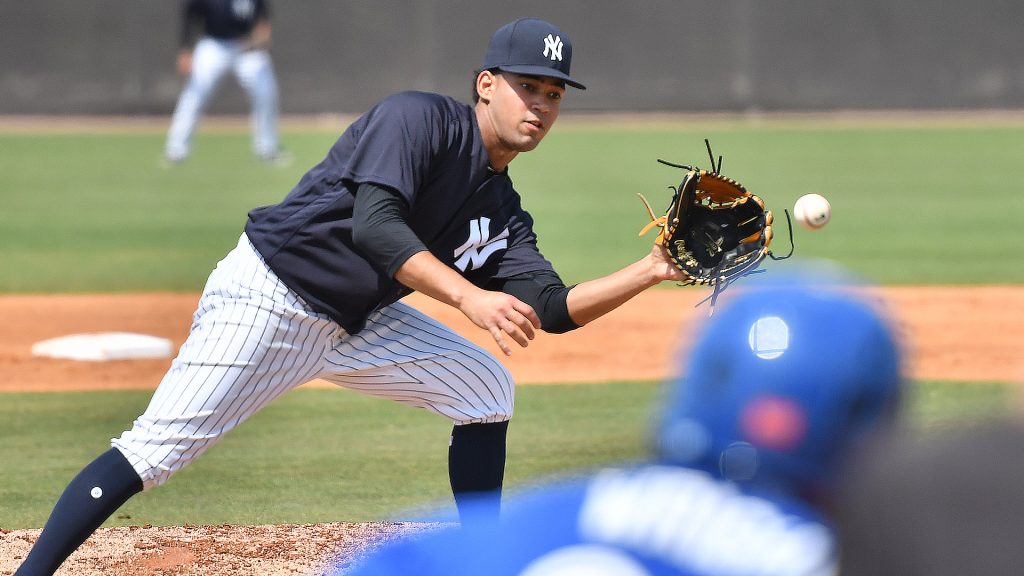 He ran into some growing pains, however, when he reached AAA. Now, it’s possible that Garcia was experiencing some fatigue, but the higher level without a doubt had a negative effect on his play. Garcia recorded a 5.40 ERA (5.18 xFIP), with a 10.13 K/9 in 40 innings pitched. At 5’10” and 163 pounds, Garcia is not an imposing force on the mound.  His fastball is in the low-90s, usually around 91-94 but has hit 96 at times in the past.  He backs it up with a true plus curveball and an average changeup that is developing into an above-average pitch.

Much like Schmidt, Garcia is a high profile pitching prospect for the Yankees. Should the Yankees need extra arms to make an impact, expect Garcia to be one of them. 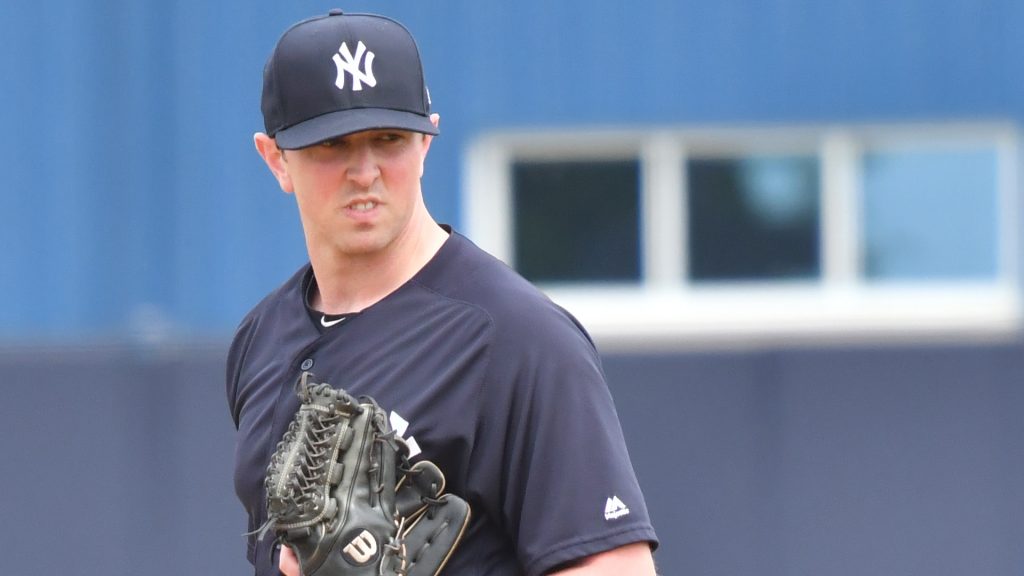 There’s a pretty strong theme here. Pitching depth is going to be of the utmost important in this pandemic-shortened season. Kriske, a 26 year old 6′ 3″ 190 lb right handed pitcher, was drafted 188th overall by the Yankees in the 2016 June Amateur Draft. Kriske mixes a 94-97 MPH fastball that plays well up in the zone with a deadly splitter and slider that can draw plenty of swings and misses. He’s since matured physically from when he joined the league, getting stronger while adding the Splitter that he has become so well known for in Trenton. In 48.2 innings pitched with Trenton in 2019, Kriske recorded a 2.59 ERA (3.19 xFIP), with an 11.84 K/9. With good velocity on his fastball and a couple of strikeout pitches in his back pocket, Kriske could get a shot in 2020 to prove his worth. 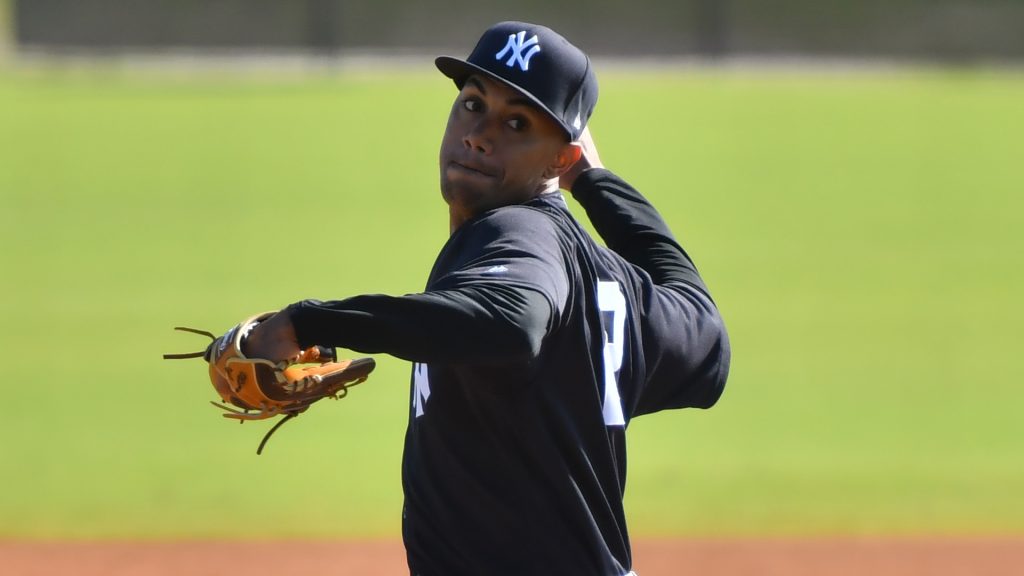 The Yankees signed right-hander Adonis Rosa out of Santiago, Dominican Republic on December 19, 2013, as an international free agent. Since then, he has worked his way up to finally making his first MLB appearance in 2019. Rosa began the 2019 season in the bullpen, first with the Scranton/Wilkes-Barre RailRiders for two games before being sent down to Trenton for several games before coming back to Triple-A.

Rosa’s fastball sits anywhere from 91-93 MPH, with a top out at 94 MPH.  He follows it up with an average curveball and slider (83-84) as well as a changeup that is still developing, but is not quite ready for usage at the Major League Level. Despite not throwing the hardest, Rosa has a deceptive motion and good control of his pitches which allows him to attack hitters effectively. He allowed only 2.09 BB/9 in 2019, an above average mark.

As far as splits go, Alvarez is equally as effective versus left-handed and right-handed hitters. Against left-handed hitters, he posted 41 strikeouts and a 1.20 WHIP while allowing eight earned runs and surrendering 17 walks in 30 innings pitched. He also allowed just one home run in those 30 innings. Against right-handers, Alvarez posted 35 strikeouts and a .99 WHIP while allowing seven earned runs and surrendering just six walks in 28.1 innings pitched.

Alvarez is a big right-handed pitcher that has the potential to be an asset for the Yankees in 2020. Despite having high strikeout numbers, he doesn’t do it with a blow-away fastball. Alvarez’s fastball sits around 90-94 MPH, his curveball at 80-83 and a changeup at 80. Alvarez is on the older side when it comes to prospects, at 23 years old, but his performance in 2019 was nonetheless encouraging. Should the Yankees require reinforcements, expect to see Daniel Alvarez’ name on your TV screens.

In sum, Covid-19 will undoubtedly have an impact on the types of players that make a difference. While it may appear that a shorter schedule would imply stars resting less, and thus teams with the most stars winning, we cannot overlook the unpredictability of the current health climate. Especially when it comes to pitching, having as many ready arms as possible will be a key. No pitcher can isolate for two weeks and then go back on the mound on the 15th day. The Yankees have plenty of young arms that haven’t seen Major League action, and I think that will change in this once-in-a-lifetime season.